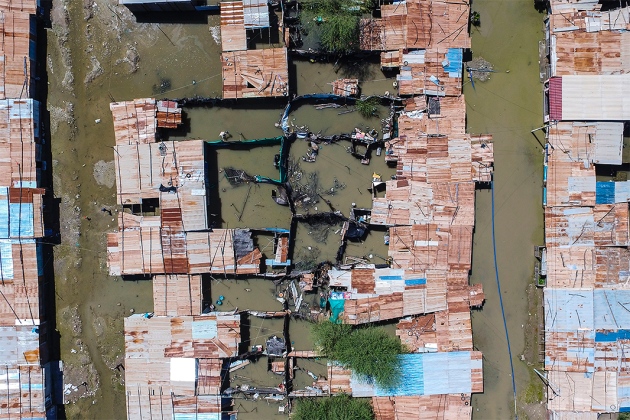 Torrential rains pummelled Peru’s northern coastal desert in February and March, triggering floods that killed at least 113 people and destroyed some 40,000 homes. As families grapple with their losses and government officials tally the cost of repair and reconstruction, scientists are gearing up for an unusual opportunity to study ecosystems that go decades without much rain.

The rains were spurred by an unusual ‘coastal’ El Niño climate pattern, in which warm water pooled off the coast of southern Ecuador and northern Peru — more so than during the much larger 2015–16 El Niño. Rains fell in both countries, but the human toll was highest in Peru’s normally parched northern desert.

In the now-greening land, plants are growing, bird populations are shifting and rivers are moving sediments and pollution in ways they haven’t done for two decades. What scientists learn as they descend on the region could aid conservation efforts and help people and government officials to prepare for severe weather events.

“Except for the impacts on the people,” says biologist Juan Torres of La Molina National Agrarian University in Lima, “this is a meteoro­logically enchanting moment.”

Once roads are passable, Torres will visit field sites that he studied after the powerful 1997–98 El Niño, which also soaked the region. At that time, Torres found wild relatives of domesticated crops — including tomatoes, peppers, potatoes and squash — that had sprouted from dormant seeds. This year, he will again catalogue wild plants, along with the crops that farmers choose to grow on lands made fertile by the flooding.

Part of the northern desert is irrigated farmland, but there are also patches of a dry forest that has been devastated in recent years by industrial agriculture, urban sprawl and the charcoal trade. Oliver Whaley at the Royal Botanic Gardens, Kew, in London, has studied Peru’s dry forests for 25 years, and hopes that the rain will bring respite to the ecosystem.

One important tree species, known locally as huarango (Prosopis spp.), has been in rapid decline, in part because of pressure from insects and a fungus. The floods may have washed the insect pests away. Peruvian botanist Ana Juárez will survey the area further with Whaley in May, but has not seen any insects on the trees near her since the rains. That’s a good sign, but the ongoing destruction of the dry forest seems to have exacerbated erosion and flooding from the storms.

That’s what the rivers are supposed to do, says Jorge Abad, a civil engineer at the University of Engineering and Technology in Lima. But these floods caused damage because the rivers have been channelled, dammed and dredged without considering sediment flow, he says, adding that better modelling would allow engineers to improve flood control and reduce future disaster risk.

The rains have also washed rubbish, metals and chemicals from towns, mining operations and farmlands into the Pacific Ocean. That worries Carlos Zavalaga of the Scientific University of the South in Lima, who studies the seabirds that live along the Peruvian coast.

Warm coastal waters can drive out schools of Peruvian anchovies (Engraulis ringens), robbing guano-producing birds of their main food supply and leading them to hunt elsewhere. As of February, two-thirds of the Guanay cormorants (Phalacrocorax bougainvillii) at Punta San Juan, on the south-central coast, had abandoned their nests. Besides the impact on the ecosystem, losing these birds will reduce the accumulation of guano, which is still mined in the area. Zavalaga plans to survey the situation in the coming weeks and to analyse bird blood and feathers for contaminants from the washout.

No one predicted this year’s disaster until it was too late. Scientists had expected the major El Niño of 2015–16, but that system’s effects were muted in South America. And even though this year’s rainfall is comparable to that due to the large 1997–98 El Niño, the causes are different.

That raises questions for climate scientists, says Rodney Martínez, an oceanographer at the International Center for Research on the El Niño Phenomenon in Guayaquil, Ecuador. He says that scientists need a better understanding of these atypical coastal El Niños, which may also have occurred in the 1920s and 1970s, and how they relate to larger ocean cycles.

But studies could be undermined by a lack of funding. Ocean-monitoring buoys set by Peruvian and Ecuadorian scientists after the 1997–98 El Niño were vandalized and never repaired, and the Pacific-wide Tropical Atmosphere Ocean instrument array is suffering from deterioration and budget cuts.

“What we’ve seen in Ecuador and Peru is resounding evidence of the importance of managing ecosystems for the prevention of extreme events,” Martínez says. “That still is not fully included in risk management.”