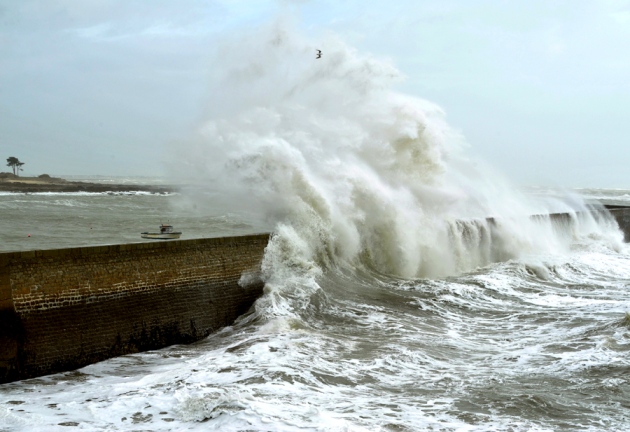 For humans, wading into the ocean shallows is generally a good way to cool off. But researchers have found that energy from breaking waves actually warms near-shore waters — in some places, may have a greater effect than sunlight does1.

This effect adds a wrinkle to scientists’ understanding of shallow coastal environments, ranging from coral reefs to eroding Arctic shorelines to beaches popular with vacationers.

Up to now, researchers have assumed that radiation from the Sun was the main source of heat in surf, with a small contribution from the warm air. The water loses heat through radiation or evaporation.

But few scientists had considered the effect of the energy that dissipates each time a wave breaks. Some of that energy takes the form of sound and erosion as the water pounds the shore. But most of it is converted to heat from the forces of friction within the swirling waters.

Physical oceanographers Gregory Sinnett and Falk Feddersen measured each of those factors in the coastal heat budget using data from buoys and sensors at the seaside campus of the Scripps Institution of Oceanography in La Jolla, California. They calculated the amount of energy in the waves by measuring their height and speed from buoys offshore.

The analysis showed that waves were packing much more heat than the team had expected: roughly one-quarter the amount coming from the southern California sunlight. Furthermore, they calculate that in places with stronger waves and cloudier skies — such as the US Pacific Northwest — wave heating could be nearly three times stronger than the energy imparted by the Sun.

The work was originally intended as a pilot study to supplement a grant proposal, says Feddersen. “But the results were so profound, we were like, ‘Holy shit, we gotta write this up,’” he says. The findings were published in Geophysical Research Letters on 7 October1.

Other scientists say that the notion of waves heating coastal waters is a simple idea that has been overlooked until now. “It’s obvious when you think about it,” says Peter Wadhams, a physical oceanographer at the University of Cambridge, UK.

“No one had suggested it before, but on first principles, of course it makes sense,” says Stephen Monismith, a physical oceanographer at Stanford University in California.

Wadhams suspects that the effect may be contributing to coastal erosion in Arctic Alaska. There, the loss of sea ice has created open water that is generating waves that are claiming coastlines at rates of tens of metres per year, forcing entire villages to relocate. The heat, Wadhams says, is probably helping to melt ice trapped in the former permafrost.

Monismith says that the fine spray created by breaking waves evaporates faster than water from the ocean surface, which could partially offset their heat. But he thinks the heating effect could be significant at coral reefs in shallow waters, and plans to re-examine some data he has taken from French Polynesia to find out.