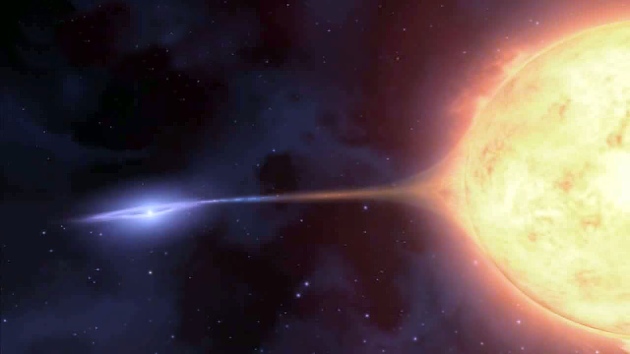 This artist's conception shows a white dwarf (left) siphoning material from a larger star, a process that will eventually cause a stellar explosion.

The exploding stars known as type Ia supernovae are so consistently bright that astronomers refer to them as standard candles — beacons that are used to measure vast cosmological distances. But these cosmic mileposts may not be so uniform. A new study finds evidence that the supernovae can arise by two different processes, adding to lingering suspicions that standard candles aren't so standard after all.

The findings, which have been posted on the arXiv preprint server1 and accepted for publication in the Astrophysical Journal, could help astronomers to calibrate measurements of the Universe’s expansion. Tracking type Ia supernovae showed that the Universe is expanding at an ever-increasing rate, and helped to prove the existence of dark energy — advances that secured the 2011 Nobel Prize in Physics.

The fact that scientists don’t fully understand these cosmological tools is embarrassing, says the latest study’s lead author, Griffin Hosseinzadeh, an astronomer at the University of California, Santa Barbara. “One of the greatest discoveries of the century is based on these things and we don’t even know what they are, really.”

It's not for lack of trying: astronomers have put forth a range of hypotheses to explain how these stellar explosions arise. Scientists once thought that the supernovae were built uniformly, like fireworks in a cosmic assembly line. That changed in the 1990s, when astronomers noticed that some of the supernovae were dimmer than the others.

Astronomers can correct for the difference because the brightest supernovae seem to fade more slowly than their dimmer kin. Still, the fact that each ‘standard candle’ looks slightly different from the next is cause for concern. “When you’re trying to measure the expansion rate of the Universe to 1%, these subtle differences make you worry that maybe type Ia supernovae are throwing you off,” says Peter Garnavich, an astronomer at the University of Notre Dame in Indiana.

At least one thing seems clear, however. Astronomers remain convinced that a white dwarf, an Earth-sized remnant of a Sun-like star, plays a central part in the formation of each type Ia supernova. But they’re not sure what pushes white dwarves over the edge, because these stars are too stable to explode on their own. That suggests that a companion star — another white dwarf, a star like the Sun or even a giant star — helps to set each supernova in motion.

If this companion star is large, the idea goes, then the white dwarf would siphon material from it. Eventually, it would accumulate so much extra mass that the pressure would ignite a runaway thermonuclear explosion. But if the companion star is small — perhaps a second white dwarf — the two celestial bodies would spiral towards each other and merge together before exploding.

Researchers have been searching for evidence of these processes by hunting for newly formed supernovae. That’s because a supernova created in the first scenario would leave evidence behind: material travelling out from the stellar explosion would light up as it hit the slightly smaller, but still intact, companion star. But a supernova formed by the merger of a white dwarf and a small companion would obliterate all traces of the stars involved in its birth.

Astronomers had only seen evidence for the second scenario — until now. Griffin and his team’s paper is the first to report a supernova formed by a white dwarf leaching material from a massive companion star. The results add weight to the idea that type Ia supernovae can form through two different stellar assembly lines.

The first hint of the discovery came on 10 March, when a supernova appeared on the outskirts of the spiral galaxy NGC 5643, 16.9 million parsecs from Earth (55 million light years). David Sand, an astronomer at the University of Arizona in Tucson and a co-author of the study, found it as he pored over data from the DLT40 supernova search, which scans roughly 500 galaxies every night.

Sand quickly took another image to verify that what he had seen was a stellar explosion, not an unknown asteroid. Within a few minutes, he knew it was time to alert the Las Cumbres Observatory — a network of 18 telescopes around the world that allows astronomers to monitor objects continuously as they move across the sky.

Hosseinzadeh, Sand and their colleagues observed the supernova every 5 hours for roughly 6 days and then once a night for 40 days after — allowing them to map its changing luminosity. During this period, they saw a temporary jump in brightness caused by material ejected from the supernova striking the companion star.

“This is the best evidence yet for a shock due to a companion star in a normal type Ia supernova,” Garnavich says.

But the discovery is just the beginning of unravelling the mystery behind these not-so-standard candles. To better pin down their measurements of the cosmos, astronomers will keep searching for more of these dim young supernovae.

“It’s like having a tool that you know how to use, but you don’t know how it works,” Hosseinzadeh says. “Understanding the physics of the tool that you're using seems better than just using it blindly.”