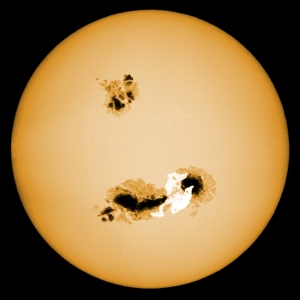 Superflares (white area) arise from starspots (dark areas) much larger than those seen on our Sun.

Some middle-aged stars burn and rave like newborns, producing flares thousands of times as energetic as those we see on the Sun, according to the first large survey of these events.

Solar flares occur when magnetic-field loops threading through sunspots get twisted and break, releasing massive amounts of radiation and accelerating charged particles into space. The largest ever measured on the Sun took place on 1 September 1859, and was observed as a mysterious brightening by British astronomer Richard Carrington, who was drawing a group of sunspots at the time.

Hours later, as particles from the event hit Earth and rattled its magnetic shield, auroras graced the skies down to tropical latitudes and telegraphy lines threw off sparks even when disconnected from their batteries. If that happened today, says Bradley Schaefer of Louisiana State University in Baton Rouge, the current induced in power grids "would fry our transformers".

But flares even more powerful — up to 10 million times as energetic as the so-called Carrington event — have occasionally been observed on other stars. Unfortunately, observations so far have been spotty, with some coming from X-ray satellites and others from visual observations, says Schaefer.

That's now changing, thanks to NASA's Kepler spacecraft. Since 2009, the satellite has been observing the same patch of sky continuously, looking for brightness changes in stars that could signal orbiting planets. "Suddenly the field is awash in huge amounts of data," Schaefer says. "We've got a way to get good demographics on the stars that have superflares."

Hiroyuki Maehara and colleagues at Kyoto University in Japan have carried out the first such analysis based on 120 days of Kepler observations in 20091. Out of 83,000 stars of the same type as the Sun, 148 (about 0.2%) had superflares with energies between 10 and 10,000 times greater than the Carrington event.

Most of the 365  superflares observed occurred on stars that rotated in less than 10 days. This is in line with expectations, because stars that rotate quickly — which tend to be young — have more magnetic energy to burn, as their magnetic fields are generated by the convection of ionized gas. But curiously, about a quarter of the superflares occurred on slower-spinning stars like the Sun, which takes about a month to complete one rotation.

How could such magnetic lightweights generate superflares? Schaefer and others have previously suggested that magnetic interactions with nearby Jupiter-like planets could be to blame2. "In a [regular] solar flare, you have magnetic fields coming out of one sunspot and going into its companion sunspot and those get twisted and they break," he says. Instead, he says, the magnetic field could go out of the superflare star and connect to a 'hot Jupiter' nearby, acting like a rubber band connecting the two. As the planet orbited, the field would tauten, getting stronger by drawing the planet closer, until it ultimately snapped, releasing massive amounts of energy.

But none of the 148 superflare stars observed in this batch of Kepler data showed any signs of having a hot Jupiter. "It seems extremely unlikely that a planet is causing these flares," says Lucianne Walkowicz, a Kepler team member at Princeton University in New Jersey. "More likely, it means that even when [stars are rotating slowly], they are occasionally able to store up their magnetic energy and release it in these big flares. It's really a mystery as to how and why that happens."

Could superflares occur on the Sun today? Maehara thinks not, as most of the superflare stars in his study seem to sport starspots much larger than those on the Sun, for unknown reasons. But he suspects that several billion years ago the situation was different.

Manfred Cuntz of the University of Texas at Arlington agrees. The Sun may have rotated once every few days in its youth, and this churning should have led to the release of magnetic energy in superflares. "It probably happened quite often when the Sun was quite young," Cuntz says.

Maehara says that if extremely large sunspots were to appear on the Sun now, superflares might occur. "That would be bad," says Walkowicz, as the radiation could shred the ozone layer and cause mass extinctions. "But I try to stay busy enough that I can't worry about freak events."