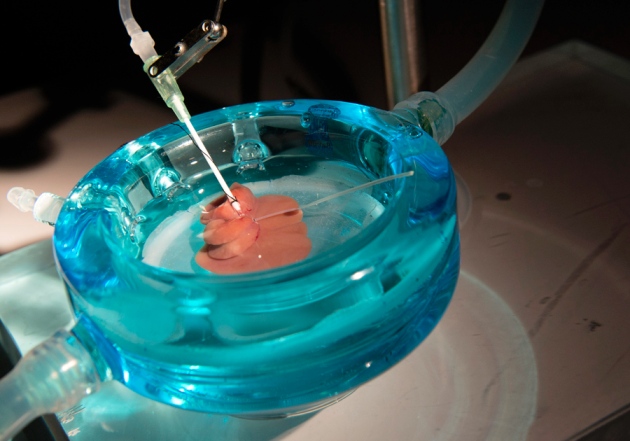 When a human donor organ becomes available, transplant surgeons have only about 12 hours to collect and transplant the tissue before it breaks down. But a slow-cooling method that first chills rat livers and then drops the temperature to below freezing — allowing them to be stored in a 'supercooled' but non-frozen state — keeps them fresh for three days. If the method works for human organs, it could drastically increase the number that are available for transplantation.

Researchers have attempted to freeze organs for decades to provide more time to transport and match them to recipients. But the combination of freezing and thawing irreparably damages cells, especially if ice forms inside them. So medical engineer Korkut Uygun, of Massachusetts General Hospital in Boston, and his colleagues developed a method that aims to skip the ice-forming stage of freezing altogether.

First, the team flooded rat livers with oxygen and a combination of chilled chemicals, including a glucose-like compound called 3-O-methyl-d-glucose that protects the cells against freezing. This slowly cooled the livers to 4 °C, and the researchers then stored and preserved them at –6 °C without freezing them.

Three days later, the team reversed the process by gradually bringing the stored livers back up to body temperature and transplanted them into rats. All rats that received transplants of supercooled livers survived for at least three months, whereas rats that received three-day-old livers preserved using current approaches all died. The research is published online today in Nature Medicine1.

Uygun says that with a bit of tweaking — such as adjusting the rate of cooling — the method should scale up to larger organs, including human ones, and would not be limited to livers. “All organs are fair game,” he says.

Because the US Food and Drug Administration has already approved most of the technique's chemical components for use in humans, Uygun hopes to begin clinical trials within two to three years after tests in larger animals.

The preservation method could allow researchers to rescue organs that would otherwise have been discarded; according to some estimates, this could make at least 5,000 extra organs available to patients per year2. And physicians would have the option of shipping organs much farther, even to other countries, to people waiting for a transplant.

“I think it’s a remarkable advance,” says cryobiologist Gregory Fahy, chief scientific officer at cryopreservation company 21st Century Medicine in Fontana, California. However, he cautions that several issues still need to be resolved — for instance, vigorous jostling of the supercooled organs during transportation could cause them to freeze by disrupting their steady temperature-suspended state, and large organs might be more difficult to cool evenly.

But the potential is vast. Fahy believes that the last major advance in organ preservation, the creation in the 1980s of a chemical solution called UW (after the University of Wisconsin, where it was developed), contributed to a big spike in the number of transplants. “I would anticipate something similar to that would happen here,” he says.