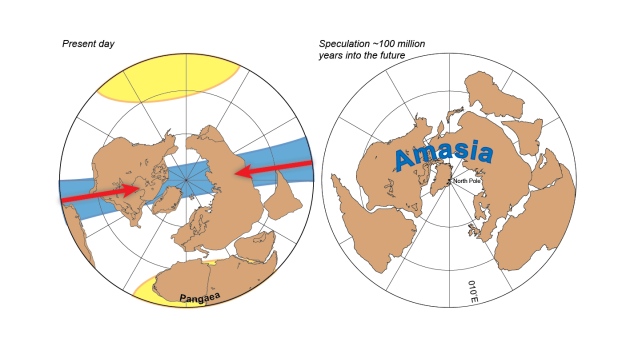 The current continents (left) are set one day to merge into the supercontinent Amasia (right), centred over the Arctic.

In 50 million to 200 million years' time, all of Earth’s current continents will be pushed together into a single landmass around the North Pole. That is the conclusion of an effort1 to model the slow movements of the continents over the next tens of millions of years.

A supercontinent last formed 300 million years ago, when all the land masses grouped together on the equator as Pangaea, centred about where West Africa is now. After looking at the geology of mountain ranges around the world, geologists had assumed that the next supercontinent would form either in the same place as Pangaea, closing the Atlantic Ocean like an accordion, or on the other side of the world, in the middle of the current Pacific Ocean.

But Ross Mitchell, a geologist at Yale University in New Haven, Connecticut, and his colleagues have a new idea. They analysed the magnetism of ancient rocks to work out their locations on the globe over time, and measured how the material under Earth's crust, the mantle, moves the continents that float on its surface.

They found that instead of staying near the equator, the next supercontinent — dubbed Amasia — should form 90 degrees away from Pangaea, over the Arctic.

Ross Mitchell talks about his model on the Nature podcast this week.

“First you would fuse the Americas together, then those would mutually migrate northward leading to collision with Europe and Asia more or less at the present day North Pole,” says Mitchell. “Australia would continue with northward motion and snuggle up next to India.”

They call this model orthoversion, as opposed to introversion — in which the supercontinent forms where Pangaea was — or extroversion, in which it moves round to the other side of the world, staying on the equator.

Orthoversion helps to clear up a conundrum that has bothered geologists. They knew there had been supercontinents in the past, and that these land masses had a variety of configurations, “but we weren’t quite sure whether there was method in the madness as you went from one to the other,” says Peter Cawood, a geologist at St Andrews University, UK.

The way Earth’s continents move has implications for biology — for example, it affects how easily species can mingle over time. “Understanding the disposition of continental masses is fundamental in our understanding of Earth’s history,” says Cawood. “Rocks are our windows onto history.”