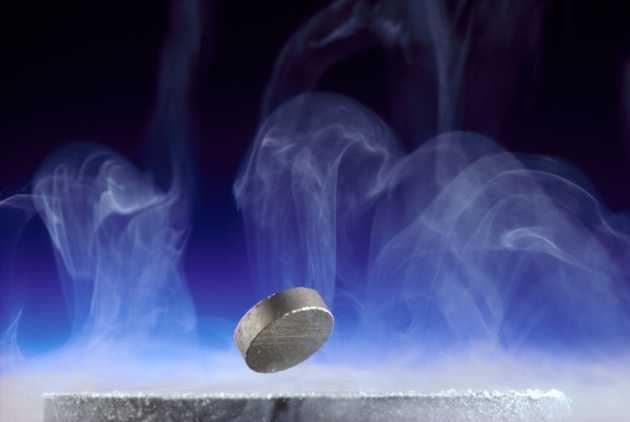 Superconductors made of ceramics called cuprates have until now held the record for the warmest temperature at which they can operate, but a new class of materials could change that.

For nearly 30 years, the search for a room-temperature superconductor has focused on exotic materials known as cuprates, which can carry currents without losing energy as heat at temperatures up to 164 Kelvin, or –109 ˚C. But scientists say that they have trumped that record using the common molecule hydrogen sulphide1. When they subjected a tiny sample of that material to pressures close to those inside Earth’s core, the researchers say that it was superconductive at 190 K (–83 ˚C).

"If the result is reproduced, it will be quite shocking," says Robert Cava, a solid-state chemist at Princeton University in New Jersey. "It would be a historic discovery."

According to the established theory of superconductivity — dubbed BCS theory after the surnames of its creators, John Bardeen, Leon Cooper and Robert Schrieffer — vibrations in a crystal's atoms can lead electrons to form ‘Cooper pairs’ that can flow through the crystal without resistance. BCS theory was developed in the 1950s, but most physicists believe that it cannot explain superconductivity in cuprates, which was discovered in 1986, or in iron pnictides2, found in 2006.

Scientists hope that BCS theory can guide the search for other kinds of high-temperature superconductors, particularly in materials containing light elements such as hydrogen. These generate more rapid vibrations that create stronger bonds between electron pairs.

The latest research builds on the work of Neil Ashcroft, a physicist at Cornell University in Ithaca, New York, who studied the superconducting potential of hydrogen compounds3. More specifically, it investigates a recent theoretical prediction by a group of Chinese physicists that hydrogen sulphide should remain superconducting up to about 80 K when exposed to a pressure of 1.6 million atmospheres4. Such high pressure squeezes the electrons in the Cooper pairs together and makes them less likely to be destroyed by thermal fluctuations.

Mikhail Eremets and his colleagues at the Max Planck Institute for Chemistry in Mainz, Germany, placed a sample of hydrogen sulphide, about one-hundredth of a millimetre across, between the tips of two diamond anvils and then used electrodes to measure how the material’s electrical resistance changed as they cooled the system towards absolute zero. They found that under a pressure of 1.8 million atmospheres, the resistance dropped suddenly at about 190 K, suggesting that a transition to superconductivity had occurred.

The researchers attribute this higher-than-expected ‘critical’ temperature to the breakdown of hydrogen sulphide into molecules containing relatively larger numbers of hydrogen atoms. These molecules would, they say, be expected to remain superconducting up to this temperature.

The researchers report several lines of evidence to support their claim of high-temperature superconductivity, including having seen a much lower transition temperature (90 K) when they swapped heavier sulphur deuteride for sulphur hydride. The heavier atoms, they point out, would impede superconductivity by slowing down the crystal vibrations. The team posted the results on the arXiv online repository on 1 December.

Should it be confirmed by other groups, this result would represent a huge increase in the critical temperature obtainable through the interactions between electrons and crystal vibrations. The current record (in magnesium diboride) stands at 39 K. As to whether Eremets and his colleagues have built a strong case, "I can't see anything that leaps out of the paper that is wrong, nor can other people who have read it,” says Paul Grant, a condensed-matter physicist and principal of W2agz Technologies in San Jose, California. The work he adds, “has created a stir in the superconductivity community”.

Alexander Gurevich, a theorist at Old Dominion University in Norfolk, Virginia, agrees that the results would represent “a significant breakthrough in superconductivity research” but for the moment remains cautious. He says that the authors have yet to demonstrate one of the hallmarks of superconductivity, known as the Meissner effect, in which a material ‘expels’ magnetic field lines as it cools down into a superconducting state. “I do hope that this work will stimulate other groups to reproduce this experiment promptly,” he adds.

As to the practical utility of the work, Eremets and his colleagues say that it might now be possible to find high critical temperatures in other hydrogen-containing materials, such as carbon-based fullerenes or aromatic hydrocarbons. These, they say, might be turned into superconductors by mixing in small fractions of other elements rather than by applying high pressure. Cava, however, warns that it is still too early to consider possible applications. "Whether such a thing could occur at ambient pressures for other hydrides is a question that is best not speculated about," he says.