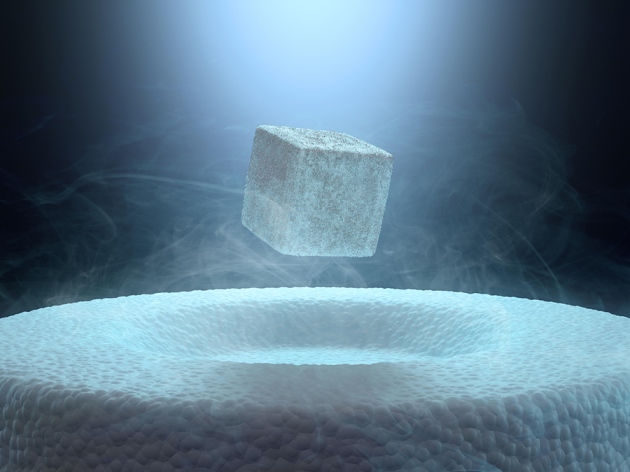 The long-standing quest to find a material that can conduct electricity without resistance at room temperature may have taken a decisive step forward. Scientists in Germany have observed the common molecule hydrogen sulfide superconducting at a record-breaking 203 kelvin (–70 ˚C) when subjected to very high pressures. The result confirms preliminary findings released by the researchers late last year, and is said to be corroborated by data from several other groups.

Some physicists urge caution, however. Ivan Schuller at the University of California in San Diego, says that the results "look promising" but are not yet watertight. However, Antonio Bianconi, director of the Rome International Center for Materials Science Superstripes (RICMASS), thinks that the evidence is compelling. He describes the findings as "the main breakthrough" in the search for a room-temperature superconductor since the 1986 discovery of superconductivity in cuprates — exotic ceramic compounds that exhibit the phenomenon up to 164 K.

Last December1, Mikhail Eremets and two other physicists at the Max Planck Institute for Chemistry in Mainz reported that they had discovered hydrogen sulfide superconducting below 190 K. When they placed a 10 micrometre-wide sample of the material in a diamond-anvil cell and subjected it to a pressure of about 1.5 million atmospheres, they found that its electrical resistance dropped by more than a factor of 1,000 when cooled below the threshold, or 'critical', temperature.

At that time, however, the researchers had not been able to demonstrate a second key characteristic of superconductivity, known as the Meissner effect, in which samples expel a magnetic field when cooled below the critical temperature.

In the latest work2, the authors got together with two physicists from the University of Mainz to build a non-magnetic cell and acquire a very sensitive type of magnetometer known as a SQUID. They placed 50 micrometre-wide samples of hydrogen sulfide under pressures of up to 2 million atmospheres in an external magnetic field, and slowly warmed them, starting from a few degrees above absolute zero. They observed the tell-tale sign of the Meissner effect — a sudden increase in the sample's 'magnetization signal' — when the temperature rose past 203 K.

As to why they measured a higher critical temperature than they did last year, the researchers point to possible tiny variations in the samples' crystal structure. (Under conditions of high pressures and low temperatures, hydrogen sulfide is in a solid state.)

Bianconi says that many superconductivity researchers were sceptical of the findings when they were presented at a conference of the American Physical Society in San Antonio, Texas, in March. But the data were "very well accepted" by participants at a RICMASS conference he organized on the Italian island of Ischia in mid-June.

During discussions at the Ischia meeting, he says, it emerged that some groups in China and Japan had reproduced the results, including the drop in electrical resistance and the Meissner effect. Bianconi will not say who the groups are, explaining that they want to delay announcing their results until Eremets and colleagues have published their findings in a peer-reviewed journal (the papers are available in the arXiv online repository).

Katsuya Shimizu, a physicist at Osaka University in Japan, says that he and his colleagues have confirmed the 190 K electrical transition, using their own refrigerator to hold several samples and cells provided by Eremets.

And Schuller argues that the Mainz group should do further checks to make sure that they have not overlooked "an uncontrolled artefact", such as background noise picked up during the delicate measurements of magnetization.

Eremets and his colleagues propose that the superconductivity is likely to originate in the vibrations of the crystal lattice of H3S, which is created when hydrogen sulfide is compressed. These vibrations bind electrons together in pairs that then move through the lattice without resistance, as described by the Bardeen–Cooper–Schrieffer (BCS) theory that holds true for conventional, low-temperature superconductors.

If so, they point out, other hydrogen compounds might then superconduct at even higher temperatures, and possibly even at room temperature, given that the BCS theory does not place any upper limit on the superconducting transition.

But theoretical physicist Jorge Hirsch at the University of California, San Diego, does not believe that lattice vibrations are the correct interpretation. "The question of where the high critical temperature comes from is still wide open in my opinion,” he says.

A previous version of this article stated, before the quote in the last paragraph: “Some theorists, however, are not sure that BCS theory is the correct interpretation.” The paragraph has now been changed to more fully present Jorge Hirsch's position.