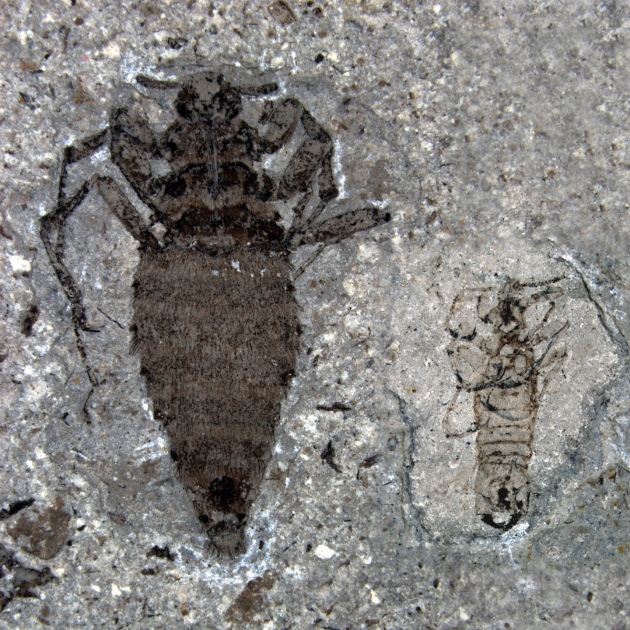 Fleas from the Jurassic period (165 million years ago) couldn't jump, and may have had to ambush their hosts.

Primitive fleas were built to sup on dinosaur blood in the Jurassic period, more than 150 million years ago. The potential host–parasite relationship has been uncovered thanks to a set of beautifully preserved fossils found in China.

Today, the varied group of parasitic insects known as fleas frequently infests mammals and birds. But little is known about their origins. The flea fossil record consists mainly of modern-looking species from the past 65 million years, and the identity of possible fleas from the Cretaceous period (145 million to 65 million years ago) has been debated by experts. But Michael Engel, a palaeoentomologist at the University of Kansas in Lawrence, and his colleagues have now extended the history of the parasites by at least 60 million years. Their work is published online today in Nature1.

Engel and his co-authors studied nine flea specimens from two sites: the 165-million-year-old Jurassic deposits in Daohugou and the 125-million-year-old Cretaceous strata at Huangbanjigou, both in China. The insects were not quite like fleas as we now know them. Whereas modern fleas range from 1 to 10 millimetres in length, the Jurassic and Cretaceous species were between 8 and 21 millimetres. “These were hefty insects as far as fleas are concerned,” says Engel.

But it wasn’t just size that set the prehistoric species apart. The Jurassic and Cretaceous fleas lacked the spring-legged, jumping specializations of modern species, and their siphoning mouthparts were armoured structures studded with saw-like projections, unlike the smooth jaws of modern fleas.

How these traits relate to the lifestyle of the fleas is difficult to determine, says Engel, but they may indicate that the fleas were ambush specialists, which caught meals by “hiding in the periphery and then scrambling onto the host for brief periods to feed before bolting again”.

What those hosts were is another question. “The mouthparts are certainly overkill for piercing the hides of early mammals and birds,” says Engel. “It really appears as though they were specialized for working their way into some heavy hides, such as those on dinosaurs.”

George Poinar, a palaeoentomologist at Oregon State University in Corvallis, agrees that without jumping legs, the fleas “would have to crawl or run to find a host”. He adds that “they could have attacked dinosaurs or possibly pterosaurs”.

But perhaps the only way to be sure would be to find fossil fleas caught in the act of feeding on dinosaurs.