A type of battery first proposed in the 1960s is attracting a fresh surge of interest as scientists and engineers look for ways to extend the range of electric vehicles. The veteran system is the lithium–sulphur battery, now back in fashion as the limitations of expensive, low-capacity lithium-ion batteries become ever more apparent. Over the past two years, what was a trickle of publications has gathered into a wave (see ‘The lithium–sulphur charge’) as scientists wear down once-major stumbling blocks, and the area attracts more funding.

Chemists say that there is substance to the buzz. Although researchers are wary of over-stating the case, “we believe that lithium–sulphur is the way to go”, says Ilias Belharouak, a materials scientist who works on batteries at Argonne National Laboratory in Illinois. “There’s promise from many different labs — and some approaches really are working,” adds Linda Nazar, a chemist who studies lithium–sulphur batteries at the University of Waterloo in Ontario, Canada. 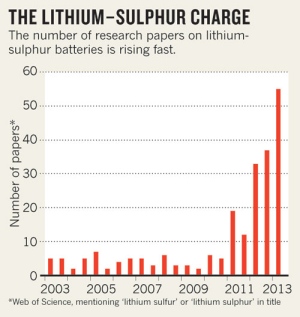 Lithium-ion batteries, as their name suggests, shuttle lithium ions from one electrode to another, while forcing electrons around an outside circuit. Improving the energy-density of that system means finding a material that can hold more lithium. Decades ago, sulphur was tipped as a promising candidate1. It is cheap, abundant and can bond to large numbers of lithium ions. In theory, a battery with a metal lithium anode and a sulphur-based cathode can hold as much as five times the energy density of today’s batteries, in which lithium ions are held (but not chemically bonded) within the pores of both the carbon and the metal-oxide-based electrodes (see ‘How batteries stack up’). That translates into a greater range for vehicles.

So far, no one has managed to commercialize a lithium–sulphur battery that works well for more than a few dozen charging cycles. The problems are numerous: sulphur does not conduct ions well, so it is hard to get the lithium to move through the sulphur to exploit the whole cathode. And when the lithium ions do start bonding to sulphur atoms, they form soluble compounds — polysulphides — that dissolve in the electrolyte (the liquid through which the ions shuttle). As a result, the sulphur electrode gradually crumbles and the battery loses capacity as it is recharged. Moreover, the lithium metal electrode itself is reactive, although some companies, such as PolyPlus in Berkeley, California, have invented materials to protect it. 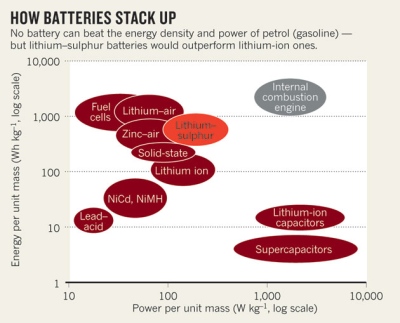 Some of these obstacles are now giving way. In 2009, Nazar’s lab showed how to connect the lithium and sulphur atoms more closely by holding the sulphur within a dense network of carbon fibres a few nanometres apart2. Coating those same structures with water-loving polymers helped to trap the polysulphide products. Since then, hundreds of papers have reported related ways of structuring the electrode to function more efficiently.

In January, Yi Cui of Stanford University in California, and his team reported that sulphur nuggets held in titanium dioxide shells — like yolks protected in porous eggshells — maintained 70% storage capacity after 1,000 charging cycles3. And earlier this month, Chengdu Liang’s group at the Oak Ridge National Laboratory in Tennessee, reported a new sulphur-based solid that conducts lithium ions4. A liquid electrolyte is no longer needed, Liang says, preventing the problem of soluble polysulphides altogether, and perhaps creating a safer system.

Jay Akhave, who works for the battery firm Altairnano in Reno, Nevada, says that Liang’s find is a “key breakthrough”, although other researchers disagree. Steven Visco, chief executive of PolyPlus, argues that Liang’s new compound — in which long sulphur chains hang off a phosphorus–sulphur molecule — will not survive hundreds of charging cycles.

Industrial lithium–sulphur firms are also bullish. At PolyPlus, Visco says that the firm’s protective lithium material is advancing batteries that cycle lithium ions through sea water — although not for many cycles. Other companies working hard include Sion Power in Tuczon, Arizona (now partly owned by German chemical firm BASF), and Oxis Energy, at the Culham Science Centre in Abingdon, UK.

Last year, these three firms separately announced a total of US$90 million in new investment, of which some $15 million came from US federal grants. Another funding boost will come from a new US Department of Energy hub — the Joint Center for Energy Storage, based at Argonne — which aims to make batteries five times more powerful and 80% cheaper within five years. It has $120 million to give out in research grants, but is not specifically focused on lithium–sulphur.

First sales of prototype batteries are likely to be to military and defence markets, for use in such applications as military drones, where the high energy densities and relative safety are more important than the thousands of charge cycles a commercial electric car requires. Researchers do not expect to see a commercial lithium–sulphur battery before the end of the decade. Clever nano-structuring that works in the lab may be too expensive as an industrial proposition. And the field suffers from hype — with academic discoveries often blurring key details, such as battery currents, to highlight one or two impressive numbers. “We need a concerted effort to make sure cells are standardized, so that we are comparing the same things when reporting data,” says Nazar.

Nonetheless, sulphur is edging ahead of other futuristic battery designs, such as the high-energy-density lithium–air battery — in which lithium ions bind to oxygen sucked in from the atmosphere. There, the ions are hard to recover for recharging and tend to be poisoned by other atmospheric gases.

In that field, says Nazar, scientists are still finding out about the problems.