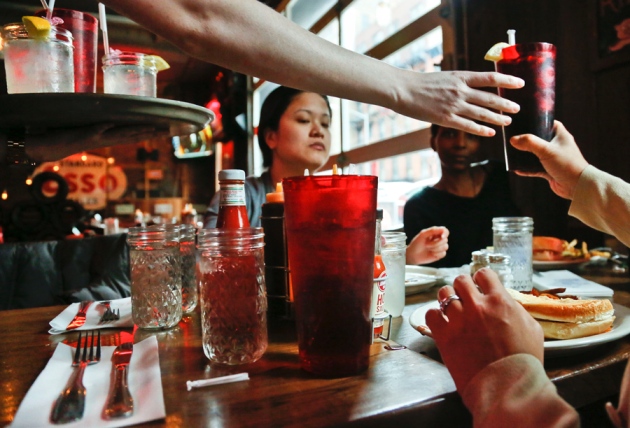 Soft drinks are just some of the many products that use artificial sweeteners.

The artificial sweeteners that are widely seen as a way to combat obesity and diabetes could, in part, be contributing to the global epidemic of these conditions.

Sugar substitutes such as saccharin might aggravate these metabolic disorders by acting on bacteria in the human gut, according to a study published by Nature this week (J. Suez et al. Nature http://dx.doi.org/10.1038/nature13793; 2014). Smaller studies have previously purported to show an association between the use of artificial sweeteners and the occurrence of metabolic disorders. This is the first work to suggest that sweeteners might be exacerbating metabolic disease, and that this might happen through the gut microbiome, the diverse community of bacteria in the human intestines. “It’s counter-intuitive — no one expected it because it never occurred to them to look,” says Martin Blaser, a microbiologist at New York University.

The findings could cause a headache for the food industry. According to BCC Research, a market-research company in Wellesley, Massachusetts, the market for artificial sweeteners is booming. And regulatory agencies, which track the safety of food additives, including artificial sweeteners, have not flagged such a link to metabolic disorders. In response to the latest findings, Stephen Pagani, a spokesman for the European Food Safety Authority (EFSA) in Parma, Italy, says that, as with all new data, the agency “will decide in due course whether they should be brought to the attention of panel experts for review”.

A team led by Eran Elinav of the Weizmann Institute of Science in Rehovot, Israel, fed mice various sweeteners — saccharin, sucralose and aspartame — and found that after 11 weeks, the animals displayed glucose intolerance, a marker of propensity for metabolic disorders.

To simulate the real-world situation of people with varying risks of these diseases, the team fed some mice a normal diet, and some a high-fat diet, and spiked their water either with glucose alone, or with glucose and one of the sweeteners, saccharin. The mice fed saccharin developed a marked glucose intolerance compared to those fed only glucose. But when the animals were given antibiotics to kill their gut bacteria, glucose intolerance was prevented. And when the researchers transplanted faeces from the glucose-intolerant saccharin-fed mice into the guts of mice bred to have sterile intestines, those mice also became glucose intolerant, indicating that saccharin was causing the microbiome to become unhealthy.

Elinav’s team also used data from an on­going clinical nutrition study that has recruited nearly 400 people in Israel. The researchers noted a correlation between clinical signs of metabolic disorder — such as increasing weight or decreasing efficiency of glucose metabolism — and consumption of artificial sweeteners.

But “this is a bit chicken-and-egg”, says Elinav. “If you are putting on weight, you are more likely to turn to diet food. It doesn’t necessarily mean the diet food caused you to put on weight.”

So his team recruited seven lean and healthy volunteers, who did not normally use artificial sweeteners, for a small prospective study. The recruits consumed the maximum acceptable daily dose of artificial sweeteners for a week. Four became glucose intolerant, and their gut microbiomes shifted towards a balance already known to be associated with susceptibility to metabolic diseases, but the other three seemed to be resistant to saccharin’s effects. “This underlines the importance of personalized nutrition — not everyone is the same,” says Elinav.

He does not yet propose a mechanism for the effect of artificial sweeteners on the micro­biome. But, says Blaser, understanding how these compounds work on some species in the gut might “inspire us in developing new therapeutic approaches to metabolic disease”.

Yolanda Sanz, a nutritionist and vice-chair of the EFSA’s panel on dietetic products, nutrition and allergies, says that it is too soon to draw firm conclusions. Metabolic disorders have many causes, she points out, and the study is very small.