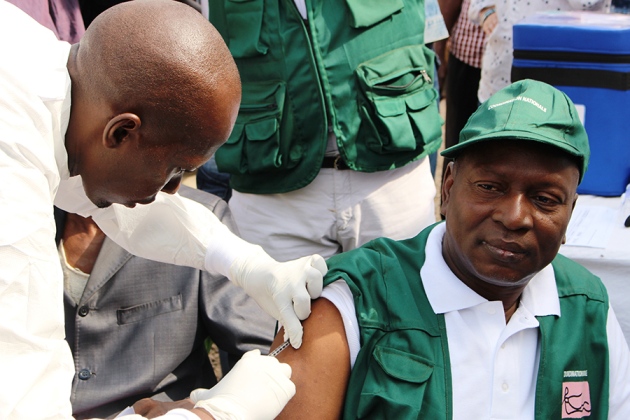 A man gets vaccinated on 10 March 2015 at a health centre in Conakry, Guinea.

An experimental Ebola vaccine seems to confer total protection against infection in people who are at high risk of contracting the virus, according to the preliminary results of a trial in Guinea that were announced today and published1 in The Lancet. They are the first evidence that a vaccine protects humans from Ebola infection.

“We believe the world is on the verge of an efficacious Ebola vaccine," Marie-Paule Kieny, the World Health Organization's assistant director-general for health systems and innovation, said during a press conference in Geneva, Switzerland, today.

The results also have implications for outbreak response in general. "This is illustrating that it is feasible to develop vaccines much faster than we’ve been doing," says Adrian Hill, a vaccine scientist at the University of Oxford, UK, who is involved in testing a different Ebola vaccine. “We just need to go on and develop them and get on with them before outbreaks appear.”

An estimated 11,280 people have died during the current West African Ebola epidemic, according to WHO data as of 30 July.

The Guinea trial — called ‘Ebola, ça suffit' in French (‘Ebola, that's enough’) — tested a ring vaccination design, a strategy that was borrowed from successful smallpox eradication efforts in the 1970s. After one patient contracts the disease, their close contacts are vaccinated in the hope of stemming the onward spread of the virus.

The Guinea trial included two arms: one in which adults who had been in contact with someone infected with Ebola and their subsequent contacts were vaccinated shortly after the original patient developed Ebola, and a second in which contacts instead received the vaccine three weeks later2. The trial tested a vaccine called rVSV-ZEBOV, which is composed of an attenuated livestock virus engineered to produce an Ebola protein. The vaccine was developed by the Public Health Agency of Canada and then licensed to the drug companies NewLink Genetics and Merck.

Of the 2,014 people who received the vaccine immediately as part of the first arm, none developed Ebola ten days after getting the vaccine. The 10-day window allows the vaccine to summon an immune response and accounts for any pre-existing Ebola infection. (A few people in the immediate vaccination group, however, did develop the disease between 1 and 10 days after vaccination.) That compares with 16 infections among the 2,380 people in the second arm.

The findings mean that the vaccine provided 100% protection from the virus, though the study's small size means that the vaccine’s true protection rate may be slightly lower, Kieny says. The authors of the paper put its true effectiveness at between 75% and 100%.

Hill describes the results as “excellent". "This vaccine works very well for three weeks. That’s good news for an outbreak situation," he says. However, it remains to be seen how long the protection against Ebola lasts. "Will it work at six months? This trial doesn’t tell us that. That’s the next stage," he says.

Guinea's outbreak is waning — just 4 cases were detected in Guinea during the week of 26 July — but Kieny said that the rVSV-ZEBOV vaccine should help to bring the outbreak to an end. “We will continue as long as there are cases,” she said.

Health officials began vaccinating patients in Guinea in April 2015, when dozens of patients there were still being diagnosed each week. At that time, Ebola was all but gone from Liberia and cases were down drastically in Sierra Leone, the two West African nations where different Ebola vaccine trials were being planned.

With case numbers waning, many experts saw the Guinea trial as the best hope of determining whether an effective Ebola vaccine was even a possibility. The ring vaccination design it used was more likely to return a statistically meaningful result, compared with other trial designs now being conducted in Liberia and Sierra Leone, because the patients enrolled in the Guinea trial were at a high risk of infection.

“A vaccine that didn’t exist in the clinic a year ago has shown not only to be effective in a phase III trial but to control an outbreak, which is a fantastic result," says Hill. (Phase III is the stage of a clinical trial which determines whether a vaccine works and is generally required for regulatory approval.)

“This trial dared to use a highly innovative and pragmatic design, which allowed the team in Guinea to assess this vaccine in the middle of an epidemic," said Jeremy Farrar, director of the Wellcome Trust in London, which helped to fund the trial, in a statement. "Our hope is that this vaccine will now help bring this epidemic to an end and be available for the inevitable future Ebola epidemics," he said.

In the wake of the trial results, the WHO has decided that the rVSV-ZEBOV vaccine will continue to be used in the current outbreak in Guinea as part of the clinical trial, Kieny said in the press conference. She also said that the WHO is now considering whether to approve the vaccine for general use. That could set the stage for establishing stockpiles to quell future outbreaks — which have tended to flare up in remote communities — and perhaps even for use in this epidemic, should the case numbers in Sierra Leone or Liberia flare up again.

“From a public health point of view, this is a really, really exciting finding,” says Seth Berkley, chief executive of Gavi, the vaccine alliance in Geneva, Switzerland, which funds vaccine access in low-income countries. His organization previously announced that it would pay for production and roll-out of an Ebola vaccine during the current outbreak, should one become available.

He notes that rVSV-ZEBOV is a 'first-generation' vaccine that is not ideal for stockpiling: it must be stored at –80° C and it protects against a limited number of species of the Ebola virus. He says that Gavi will work with researchers and industry to support the development of second-generation Ebola vaccines that target other Ebola virus species, as well as the closely related Marburg virus, and which do not require storage in expensive, laboratory-grade freezers.

In the meantime, however, he says, Gavi will consider buying one of the current first-generation vaccines.

This story has been modified since it was first posted to include further information from the press conference and a quote from Seth Berkeley.

The story has been modified since it was first posted with further information about the trial.

The story has been modified since it was first posted with quotes from Jeremy Farrar.