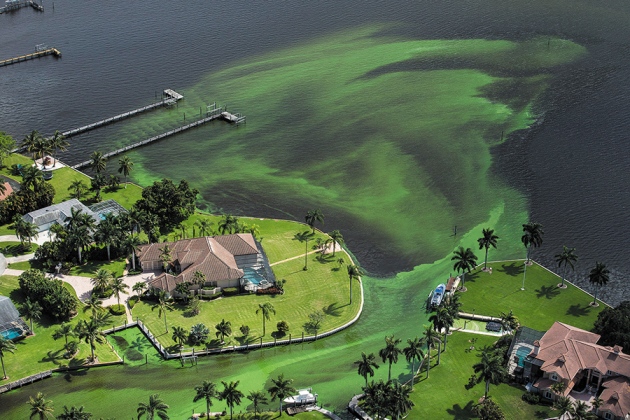 An algal bloom in Stuart, Florida, in June led to a state of emergency.

With concerns about climate 'extremes' growing1, water is often the focus — either too much or too little. That is no coincidence: climate and the hydrological cycle are tightly coupled, and water is essential to ecosystems and societies. But it is not just the quantity of water that matters. So does its quality.

Last year, Lake Erie, one of the US Great Lakes (which contain one-fifth of the world's fresh surface water), experienced its biggest recorded harmful algal bloom. At its peak, the bloom spread some 200 kilometres across most of the lake2. Meanwhile, off the continent's west coast, another record harmful bloom stretched from Baja California in Mexico up to Alaska, probably triggered by unusually warm water in the Pacific Ocean3. Both blooms were dominated by species of phytoplankton that produce powerful toxins.

Such episodes can wreak havoc. During a previous bloom, in 2014, 500,000 people living near Lake Erie were ordered not to drink tap water, because it contained levels of hepatotoxins produced by the cyanobacterium Microcystis that were 2.5 times higher4 than the World Health Organization's safe standard. The 2015 west-coast bloom of the diatom algae Pseudo-nitzschia shut down fisheries. The Dungeness crab fishery, one of the most valuable on the west coast, opened four months late owing to toxic levels of the neurotoxin domoic acid in the crabs. Brain damage in sea lions has also been documented as a result of exposure to this toxin5.

Impaired water quality is a global and growing problem, limiting resources for drinking, domestic use, food production and recreation, as well as harming ecosystems. The types and causes range from excess nutrients feeding harmful algal blooms and hypoxic 'dead zones', to bacterial, viral and chemical contamination, to pollution by personal-care products and pharmaceuticals. Cases of extreme impairment often lead to disproportionate human and ecosystem impacts. The costs can be huge. More than US$4 billion are lost each year in the United States alone as a result of harmful algal blooms6.

Because the most severe water-quality impacts are exacerbated by weather, climate plays a part. Runoff of nutrients from farmland spikes after heavy rains; warm temperatures accelerate the growth of bacteria and phytoplankton. As climate change alters weather patterns and variability, conditions conducive to severe water impairment are likely to become more frequent.

Yet there has been scant study of how climate will affect the occurrence of the extreme events that relate to water quality rather than quantity. We do not know how to relate water-quality extremes, their causes, their severity or their occurrence directly to changes in climate. It is time to plug this knowledge gap.

Scientific understanding of extreme storms, droughts and rising sea levels has improved markedly over the past decade. The impacts of extreme weather events are integral to discussions about climate-change mitigation and adaptation. The expected rise in the frequency and severity of such events is well established, and even individual episodes have been linked probabilistically to climate change1.

Not so for water quality. Researchers have explored trends in water quality with climate, but the science of projecting and attributing the occurrence of extremes is in its infancy. This is despite evidence of strong links with climate.

Regional studies reveal how multiple factors often conspire to create conditions ripe for dire water quality. For example, summer toxic blooms in Lake Taihu, the third-largest freshwater lake in China, are more intense after tropical cyclones, because the associated rains wash more nutrients into the lake, and the subsequent warmer temperatures and lower wind speeds further encourage the growth of blooms7. In 1999, a series of hurricanes triggered severe hypoxia in Pamlico Sound, North Carolina (part of the United States' second-largest estuarine system) by delivering huge amounts of nutrients, organic carbon and fresh water to the estuary8. In North American regions as diverse as the Great Lakes, the east coast's Chesapeake Bay and the Gulf of Mexico, the severity of summer hypoxia has been linked to the effects of weather on nutrient loading, water-column structure and water circulation. Although these examples all relate to harmful algal blooms and hypoxia, other types of water pollution are also affected by weather conditions, which are altered by climate change.

Several factors explain the paucity of research. First, the role of climate is difficult to pinpoint, because changes in water quality result from a delicate and complex interplay of human activities across local, regional and global scales. Complex chains of causative steps must be understood. These start with how climate change affects factors such as precipitation, temperatures and wind patterns for given regions and watersheds. Next, we must understand how these conditions alter the flow of water, nutrients, contaminants and other constituents to water bodies. Finally, we need to assess how these inputs, combined with meteorological conditions that influence freshwater and coastal systems directly, will change water quality. We do not yet know how to put the pieces of this puzzle together.

For example, the harmful algal blooms in Lake Erie are driven by excess phosphorus from changing farming and land-management practices in the region, but a summer 2011 bloom shattered previous records. A forensic analysis9 revealed that a series of intense rainstorms led to record springtime discharge from rivers, which flooded the lake with a record amount of nutrients flushed from fields. Warmer-than-average summer temperatures and low winds then accelerated the growth of buoyant Microcystis cyanobacteria. Unusually weak water circulation during the summer kept nutrients in the lake for longer, further feeding the bloom. How climate change influences the occurrence of all these factors, individually and together, needs to be elucidated to predict the likelihood of similar events happening more frequently in the future.

“There is disagreement about which variables best capture water quality.”

Second, water-quality and climate scientists work in disciplinary silos, and each tends to have a different scale of focus. Whereas much of climate science is global or concerned with large regions, most hydrologists and limnologists study processes in individual streams, lakes, watersheds or estuaries. Similarly, water-quality impacts have been treated mostly as local or regional issues, resulting from human activities in a particular basin or watershed. Little attention has been given to the local impacts of human action at global scales. For example, strategies for preventing harmful blooms and hypoxia often rightly focus on limiting nutrient loads through land management, but should also consider how a shifting climate will alter local meteorology, and thus nutrient loads.

A clear understanding of the interplay between climate and severe water-quality impairment events is predicated on tracking cause and effect across a cascading range of scales, from the globe to individual watersheds and from decades to days.

Third, observational evidence to underpin a global view of this interplay is lacking. Unlike for weather variables such as temperature and precipitation, no global network tracks water quality. Existing monitoring of water quality is sparse in space and time, and site-specific. Satellite-based observations could expand coverage, but there are no widely accepted approaches for doing so. There is even disagreement about which variables best capture water quality. For example, is the severity of a harmful algal bloom best represented by its area, the total mass of phytoplankton it contains, the amount of toxins that it produces or the ecosystem and human impacts that it engenders? Each brings a different observational challenge.

Researchers need to assess which meteorological conditions, in what combination, make extreme water-quality impairments most likely. In doing so, they must also consider land use, land management, population distributions and other regional factors that compound the effects of weather. An initiative such as Future Earth, which provides a research platform for global sustainability science, would be a good umbrella for developing and integrating such knowledge globally.

The first step should be a retrospective analysis of past extreme events, to understand commonalities and differences across types of systems and impacts. The resulting conceptual model will differ depending on the type of problem — hypoxic dead zones and microbial outbreaks in recreational waters will not link to climate in the same ways. The water-quality and climate research communities will have to work together to identify key mechanisms and feedbacks.

Understanding meteorological drivers would allow researchers to assess whether climate models can accurately represent the occurrence of key specific conditions (such as high precipitation or warm temperatures), as well as their joint or sequential occurrence (such as high precipitation followed by low winds and high temperatures). This could be explored, for example, in the context of the Coupled Model Intercomparison Project Phase 6 (CMIP6), and effort to compare climate projections under different scenarios that is under way in anticipation of the next Intergovernmental Panel for Climate Change assessment.

A clear conceptual model would also inform observational needs. Observations must capture the severity of extreme events, their impacts and key variables for assessing the links to climate change. There will be trade-offs between specificity and coverage. For example, whereas satellites might monitor some water-quality parameters and impacts globally, other key indicators such as toxin concentrations can be tracked only in situ. The GEO (Group on Earth Observations) AquaWatch initiative would be a natural forum for exploring these challenges10.

As the science improves, its implications must inform broader global discussions around water, such as the strategy for meeting the United Nations' Sustainable Development Goal of ensuring 'availability and sustainable management of water and sanitation for all', one of 17 such goals adopted last year.

The scientific community has made remarkable progress in understanding the role of climate in the occurrence and intensity of droughts, storms and other extreme events relating to water quantity. It is time for a similar examination of extremes in water quality.