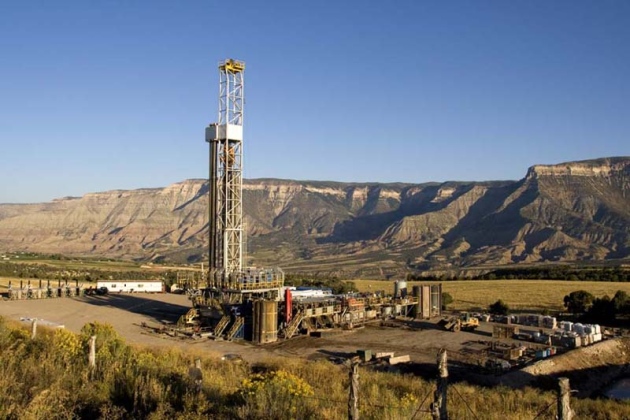 US natural gas production sites, like this rig in Colorado, emit an estimated 2.3 million tonnes of methane each year.

Environmental controls designed to prevent leaks of methane from newly drilled natural gas wells are effective, a study has found — but emissions from existing wells in production are much higher than previously believed.

The findings, reported today in the Proceedings of the National Academy of Sciences1, add to a burgeoning debate over the climate impact of replacing oil- and coal-fired power plants with those fuelled by natural gas. Significant leaks of heat-trapping methane from natural gas production sites would erase any climate advantage the fuel offers.

One concern is the potential release of methane during hydraulic fracturing, or 'fracking', which uses injections of high-pressure fluids to shatter rock and release trapped gas. Before production can commence, the well must be 'completed' by removal of the fracking fluids, which contain gas that can escape to the air.

To test the effectiveness of current controls, the researchers installed emissions-monitoring equipment at 27 wells during their completions in 2012 and 2013. Their results suggest that current controls reduce emissions in such wells by 99% compared to sites where the technology is not used, says lead author David Allen, an engineer at the University of Texas in Austin.

The researchers' estimate of annual emissions from wells undergoing completion, 18,000 tonnes per year, is also roughly 97% less than the estimate given in 2011 by the US Environmental Protection Agency (EPA).

Less encouraging was what the team discovered at 150 other well sites that were already producing natural gas. Such wells often use pneumatic controllers, which siphon off pressurized natural gas from the well and use it to operate production-related equipment. "As part of their normal operation, they emit methane into the atmosphere," Allen says.

The study was funded by a partnership of nine natural gas producers and the Environmental Defense Fund, a non-profit environmental group based in Washington DC, as part of a broad effort to trace methane leaks all the way from the wellhead to the user.

Robert Howarth, a biogeochemist at Cornell University in Ithaca, New York, says that it is possible that workers at the sites were especially conscientious about controlling emissions during the researchers’ monitoring, and that he views the results as a best-case scenario. But he adds, "it suggests that the oil and gas industry — when sufficiently motivated — can produce natural gas with modestly low emissions." (Allen says that his team had to give study sites some forewarning so that his team could install sensors before the completion process began.)

But Howarth argues that a bigger problem is the disparity between the latest findings and prior research that sampled air during flights over gas fields2, 3. That includes a study to which he contributed, the results of which3 were presented in at a meeting of the American Geophysical Union in San Francisco, California, in December 2012.

"We found very high emissions associated with a small number of wells," says Howarth. "The moral is that there are a lot of surprises out there. This paper is important in getting a lot more data, but I don't think it’s the final story."

Henry Jacoby, an economist and former director of the Joint Program on the Science and Policy of Global Change at Massachusetts Institute of Technology in Cambridge, agrees. "This is important work," he says, "but the great bulk of the problem is elsewhere, downstream in the natural gas system", including poorly capped oil and gas wells no longer in production.