Researchers love to blame the news media when reports about science are misleading or even wrong. But a December study1 making the rounds online suggests that much of the hype and misinformation about health-related research in the news has its roots in university press releases — which are almost always approved in advance by the researchers themselves. “Academics should be accountable for the wild exaggerations in press releases of their studies,” tweeted Catherine Collins, a dietitian who works for the National Health Service in London. But some say that others are to blame. Steve Usdin, editor and co-host of BioCentury This Week, a US public-affairs show covering the biopharma industry, tweeted: 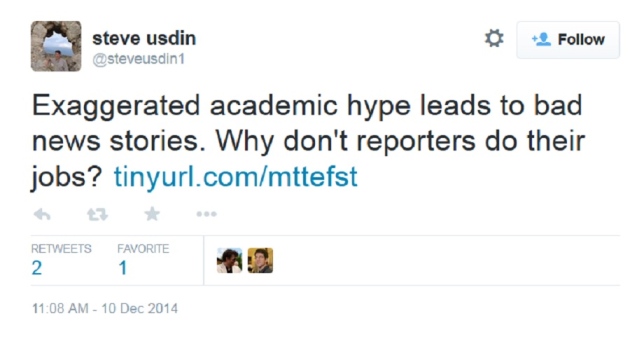 The study, published in the British Medical Journal (BMJ), examined 462 press releases produced by the leading 20 UK research institutions in 2011. Overall, 40% of those releases contained health advice that was more explicit than anything found in the actual article. One-third emphasized possible cause and effects when the paper merely reported correlations. And 36% of releases about studies of cells or animals over-inflated the relevance to humans. 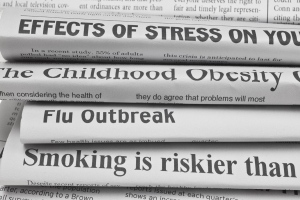 Some say health news hype can come from a variety of sources.

Those exaggerations seemed to spread to the media. The study found that when news releases took liberties with the science, 58% of the resulting news stories overstated health advice; 81% highlighted cause and effects and 86% overplayed human relevance. By comparison, when news reports were based on straightforward, unembellished press releases, only 10–18% ended up stretching the truth. The authors conclude that “improving the accuracy of academic press releases could represent a key opportunity for reducing misleading health related news”.

University press officers who are under pressure to get news coverage for their institution’s research may be motivated to overhype, notes Mark Henderson, a former newspaper science editor and now head of communications at the Wellcome Trust, a major UK research-funding agency in London. But press officers are not the only ones to blame, he writes on the Wellcome Trust blog. “Scientists often deserve their share of responsibility as well. Some — though by no means all — are often only too keen to make inflated or extrapolated claims in pursuit of a little credit or media limelight.” And, he adds, some journalists can find it difficult to break from the pack and not cover a seemingly sensational finding, especially when the press release makes that finding sound true.

Meanwhile, one institution has already tried to be more careful. An August press release from a different BMJ journal contained this disclaimer: “This is an observational study so no definitive conclusions can be drawn about cause and effect.” BMJ releases have long been a target of criticism from Gary Schwitzer, a journalism researcher at the University of Minnesota School of Public Health in Minneapolis, who runs the Health News Watchdog blog. He announced earlier this week that his initiative, Health News Review, has received funding to review health-care news releases, among other things.

Schwitzer discussed the latest study on his blog and said in an interview that it opens up an opportunity to reexamine everything that can go wrong at every level of the news food chain. Investigators and university public-relations offices can stretch the facts, he says, but he emphasizes that the media is far from blameless. “Many reporters don’t get beyond the news release. And many more don’t get beyond the abstract. That’s simply not good enough.”

Speaking to Nature, Emma Dickinson, the press officer for the BMJ itself, says that the new study “highlights the need for shared responsibility — by scientists, press officers, journals and journalists — for the reporting of new research”. In a comment on Schwitzer’s blog earlier this summer, Dickinson apologized for a release that Schwitzer had criticized, writing: “But we do make great efforts to get these things right by working with authors and editors.”

Susan Dynarski, an education and economics researcher at the University of Michigan in Ann Arbor, tweeted this take-home message for researchers: