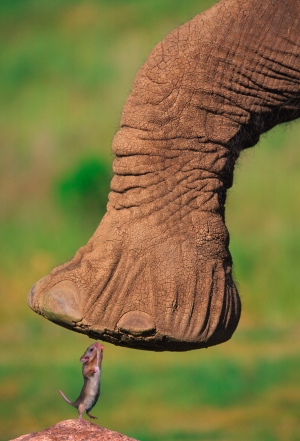 It would take tens of millions of years for a mouse to grow to the same size as an elephant.

The largest mammals to walk Earth evolved from shrew-like creatures that proliferated after the dinosaurs died out, 65 million years ago. But the change from pipsqueak to behemoth took a while: 24 million generations.

Researchers led by Alistair Evans, an evolutionary biologist at Monash University in Clayton, Australia, investigated how maximum body mass increased among 28 orders of mammals on multiple continents during the past 70 million years. By comparing the sizes of the largest members of mammal groups at different points in time, and using modern mammals to estimate the length of a generation for each group, Evans and colleagues tracked the speed at which mammals expanded. Their work is published online in the Proceedings of the National Academy of Sciences1 today.

The top speed of mammal inflation was slower than had been thought. Previous estimates of the time it takes for a mouse-sized mammal to grow to the size of an elephant — a 100,000-fold size increase — had been based on observations of much smaller, 'microevolutionary' changes in mice, and ranged from 200,0002 to 2 million generations.

“This tells us how much slower so-called macroevolution is compared to microevolution,” says Evans, explaining that small size changes can occur quickly, but larger-scale alterations require more time. To put this into perspective, “if we wiped out everything above the size of a rabbit, it would take at least 5 million generations to get to elephant-sized animals”, a 1,000-fold increase. That translates to about 20 million years.

But not all groups followed the same rule. Whales, the largest mammals ever, grew much more quickly than land-dwelling mammals, needing only about 3 million generations for a 1,000-fold size increase. Evans says that the difference was probably the result of different evolutionary constraints of life in the sea, such as the need to retain body heat, which is easier with a larger body mass.

Downsizing also occurred much faster than expansion. When Evans and his colleagues considered how quickly an elephant-sized mammal might be shrunk to mouse size, they found that the rate of decrease was more than 30 times the rate of increase. The shrinking speed is consistent with the rapid evolution of dwarfed mammoths (Mammuthus exilis) on California’s Channel Islands and small red deer (Cervus elaphus) on the island of Jersey.

Christine Janis, a palaeontologist at Brown University in Providence, Rhode Island, suggests that the “overbuilt” appearance of dwarfed mammals may be a clue as to why it is easier to become small. Size increases require the accumulation of skeletal traits to support a massive frame — such as stout limbs — but shrinking mammals bypassed these evolutionary obstacles because the body plan of a large mammal still functions at smaller sizes.

Mike Benton, a palaeontologist at the University of Bristol, UK, says the study outlines a large-scale evolutionary pattern that may not be obvious today. “The kinds of short-term rates of evolution we can measure in the lab, or even in short-term ecological observations, are not likely to be sustained for thousands of generations,” he says. A geological perspective is needed to see major evolutionary shifts.