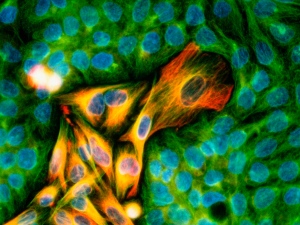 Melanoma is a complex disease with many genetic and environmental contributions.

Researchers have found a set of gene mutations that seem to play a part in some cases of skin cancer.

Cancer geneticist Michael Berger of the Broad Institute of Harvard and MIT in Cambridge, Massachusetts, and his colleagues sequenced the genomes of 25 melanoma tumours that had been donated by patients and compared them to the patients' normal cells. They found that one gene, PREX2, was mutated in 11 of the 25 tumour samples, and that genetic rearrangements occurred near this gene in nine patients. PREX2 produces a protein that curtails the action of another protein called PTEN, which is involved in preventing cancer development.

Berger and his colleagues also found potentially damaging PREX2 mutations in 14% of 107 tumours that were not part of the initial study. And when they transplanted human skin cells containing PREX2 mutations into mice that had been engineered to develop skin cancer, four of the six different PREX2 mutations accelerated development of the tumours in mice. This led the researchers to suggest that PREX2 might have a similar role in human skin cancers. Their work is published in Nature today1.

The team also confirmed some findings from earlier studies2, including the effect that sun exposure can have on the mutation rate of tumour DNA. Tumours from areas of the body that are not frequently exposed to sunlight had around 3 to 14 mutations every million base pairs, whereas one patient who was known to have had high levels of sun exposure had 111 mutations every million base pairs.

The relationship between sun exposure and mutation rates adds to the evidence for the role of sun exposure in melanoma development, says Laura Brockway-Lunardi, director of scientific programmes for the non-profit Melanoma Research Alliance in Washington DC, which helped to fund the work.

"This is especially important given the increasing incidence of melanoma, particularly in young women, due to sun exposure and indoor tanning,” says Brockway-Lunardi.

The study is part of an ongoing effort to improve understanding of the complexity of melanoma and find more targets for treatment. Previous studies had pinpointed a role for other genes, such as BRAF and NRAS, in the development of melanomas. A drug called vemurafenib, which targets mutated BRAF protein in tumours, was approved by the US Food and Drug Administration last August. The drug was the first genetically targeted drug to be approved for melanoma treatment, but it can help only about half of all melanoma patients — those whose cancers contain the mutation that it targets, and whose tumours respond to the drug

PREX2 itself is probably not a good drug target, because the mutations found in the gene do not cluster in any single location that might be easily pinpointed by a drug, says cancer researcher Levi Garraway, also at the Broad Institute, who led the study. However, Garraway says, the discovery should help researchers to improve their knowledge of the biological pathways that are disrupted in melanomas. In turn, that could lead scientists to genes and proteins in other parts of those pathways that might be better drug targets.

PREX2 also seems to work differently from BRAF and NRAS, which are considered to be 'classic' oncogenes — overactive genes that have the potential to cause cancer and which are often mutated in the same ways. By contrast, the various PREX2 mutations identified by Berger and his colleagues occurred in different places in the protein. All seemed to lead the cell to make more of the protein than usual, rather than making the protein itself overactive. Cancer geneticist Yardena Samuels of the US National Human Genome Research Institute in Bethesda, Maryland, says that this is a potentially important finding that is consistent with emerging evidence from other cancer sequencing projects.

“This may mean that the field is now identifying a novel class of driver genes that may not harbour the classic oncogene characteristics,” Samuels says.

This article originally misinterpreted Laura Brockway-Lunardi's statement on mutation rates and sun exposure. This has now been corrected.