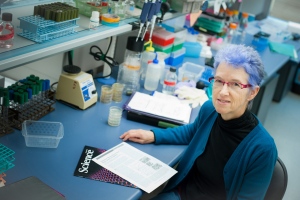 Rosie Redfield says her findings are a “clear refutation” that the bacterium GFAJ-1 can incorporate arsenic into its DNA.

A strange bacterium found in California’s Mono Lake cannot replace the phosphorus in its DNA with arsenic, according to researchers who have been trying to reproduce the results of a controversial report published in Science in 20101.

A group of scientists, led by microbiologist Rosie Redfield at the University of British Columbia in Vancouver, Canada, have posted data on Redfield's blog that, she says, present a “clear refutation” of key findings from the paper.

“Their most striking claim was that arsenic had been incorporated into the backbone of DNA, and what we can say is that there is no arsenic in the DNA at all,” says Redfield.

But the authors of the Science paper are not retreating from their conclusions. “We are thrilled that our results are stimulating more experiments from the community as well as ourselves,” first author Felisa Wolfe-Simon, now at the Lawrence Berkeley National Laboratory in California, wrote in an e-mail to Nature. “We do not fully understand the key details of the website experiments and conditions. So we hope to see this work published in a peer-reviewed journal, as this is how science best proceeds.”

In the Science paper, Wolfe-Simon and her co-workers reported that they had found a bacterium called GFAJ-1 that can use the element arsenic in place of phosphorus in molecules essential to life (see Arsenic-eating microbe may redefine chemistry of life). This was surprising because phosphorus is thought to be essential for life, whereas arsenic is usually toxic.

But after Redfield and others raised numerous concerns (see Microbe gets toxic response), many of which were published as technical comments in Science, Redfield put the results to the test, documenting her progress on her blog to advance the cause of open science.

Redfield grew GFAJ-1 bacteria in arsenic and a very small amount of phosphorus, as had Wolfe-Simon and her colleagues. She then purified the DNA from the cells and sent it to Marshall Louis Reaves, a graduate student at Princeton University in New Jersey. Reaves used a caesium chloride gradient to separate the cells' DNA into fractions of varying densities, then used a mass spectrometer to identify the elements present in each fraction of DNA. He found no arsenic in any of the DNA.

But Redfield’s methods might leave defenders of the arsenic life hypothesis some wiggle room. For instance, Redfield was unable to grow any cells entirely without phosphorus. Because it is not clear how much phosphorus was used to grow the bacteria in the original paper, its authors could argue that Redfield's cells were not sufficiently phosphorus-starved to be forced to use arsenic in its place.

Wolfe-Simon also says she would not expect to find arsenic in DNA analysed on a caesium chloride gradient, because the arsenic-containing DNA might be so fragile that it would break apart and appear only in very faint bands separate from the bulk of the cell's DNA.

However, Redfield says that Reaves analysed all of the DNA purified on the gradient, so he would have detected any arsenic. Redfield also analysed the size of DNA from cells that had been stored for two months in her lab refrigerator. The DNA fragments from cells that had been grown with and without arsenic were similar sizes, indicating that DNA from arsenic-grown cells is not unstable.

David Borhani, a biochemist and structural biologist in Hartsdale, New York, would have liked to see additional control experiments — to determine, for instance, the lowest possible level of arsenic that Redfield could have detected, and to find out where any arsenic from the GFAJ-1 DNA ends up when the DNA is purified on a caesium chloride gradient. “With appropriate controls, the caesium-chloride-gradient data would constitute a relatively definitive refutation, at least for most scientists,” he wrote in an e-mail to Nature. 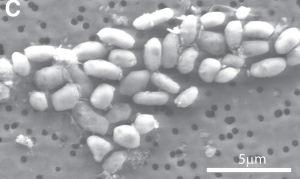 A scanning electron micrograph of GFAJ-1, the bacterium at the centre of the controversy.

Other researchers who published critiques of the arsenic-life paper say that Redfield and her collaborators have produced a reasonable refutation of its findings. But it will be difficult to definitively prove the complete absence of arsenic from GFAJ-1 DNA.

“I fear that there will be a prolonged slow rearguard battle of its advocates until the whole story will finally be forgotten, rather than an outright retraction of the original paper,” says Stefan Oehler, a molecular biologist at the Alexander Fleming Biomedical Sciences Research Center in Vari, Greece.

Ronald Oremland at the US Geological Survey in Menlo Park, California, who led the arsenic-life work1, says that the results "do not look encouraging for the arsenic-in-DNA hypothesis", but adds that he will issue an official comment only once peer reviewers have examined Redfield's data.

Redfield and her collaborators hope to submit their work to Science by the end of the month. She says that if Science refuses to publish the work because it has been discussed on blogs, it will become an important test case for open science.

Wolfe-Simon is still looking for arsenic in the bacterium. “We are looking for arsenate in the metabolites, as well as the assembled RNA and DNA, and expect others may be doing the same. With all this added effort from the community, we shall certainly know much more by next year.”

Redfield, however, does not plan to do additional experiments to address objections raised by defenders of the arsenic-life hypothesis. “We've done our part. This is a clean demonstration, and I see no point in spending any more time on this,” she says.