The presence of predators in an ecosystem can have a significant impact on soil ecology simply through the stress they cause in their prey.

Writing in Science today1, ecologist Dror Hawlena of the Hebrew University of Jerusalem and his colleagues show that when stressed grasshoppers die, the chemical differences in their bodies indirectly affect how quickly the surrounding dead plant material is broken down by soil microbes, with knock-on effects for nutrient cycling in ecosystems.

“We were interested in bridging two subfields of ecology — organism ecology and biogeochemistry — in a way to make predictions about how food web structure can affect nutrient cycling,” says Hawlena. 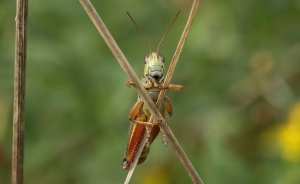 The bodies of grasshoppers reared with predatory spiders have a different chemical composition to those of unstressed grasshoppers, which has knock-on effects for their decomposition by microbes.

Previous studies have shown that stress causes animals to change their diet by eating more carbohydrates to meet their heightened energy requirements. Switching to food that contains less nitrogen leaves a chemical signature in the bodies of stressed animals2. In turn, their nitrogen-poor corpses affect the metabolism of soil microbes, because bacteria require nitrogen to produce their decomposing enzymes.

To investigate these effects, Hawlena and his team first reared grasshoppers in field cages with predatory spiders that had had their mouthparts glued shut — a way to measure the impact of fear on the grasshoppers without the spiders eating them. When the grasshoppers eventually died, the researchers added their decomposed remains to soil samples in the lab, and then added leaf litter to see how quickly the plant material would be decomposed by soil microbes and to “test for the legacy effects of fear” on soil microbe communities.

The indirect effects of predatory stress on soil microbes had a lasting effect. When the researchers added leaf litter to the soil samples that had been treated with stressed grasshoppers, the extent of decomposition of the plant litter 93 days later was 200% less than in samples treated with dead grasshoppers reared without spiders in their cage.

“We were surprised at how big the effect was,” says Hawlena. “The traditional view is that plants and microbes are the main players linking the biotic and the abiotic world, but here we have shown that predators can actually regulate microbes by affecting the chemical composition of their own prey.”

“The study is very clever and the results and the implications — that predators cause their prey to have less nitrogen and this cascades to affect decomposition — are not immediately obvious,” says ecologist Rudy Boonstra of the University of Toronto in Canada, who studies the effects of predators on stress physiology.

“This adds to a growing number of studies that show a whole range of other knock-on effects that organisms can have on the way the ecosystem functions, such as soil fertility, plant growth and nutrition,” adds soil ecologist David Wardle at the Swedish University of Agricultural Sciences in Umeå, who studies the links between above- and below-ground microbial communities in the boreal forests of Sweden and the rainforests of New Zealand.

Crucially, says Wardle, this points to the many roles predators can have in regulating ecosystems. “Top-level [apex] predators are extremely vulnerable to extinction, and when you lose apex predators there will be a whole range of effects on the way the ecosystem functions — including effects we don’t even know about,” says Wardle.

It is hard to speculate how losing top-level predators through human-induced changes will affect soil ecology and biodiversity globally, but Hawlena says that demonstrating that predators can have “dramatic effects” on biogeochemical processes has profound implications.

“This is a whole new component to the story of how anthropogenic changes can impact ecosystems,” he says.