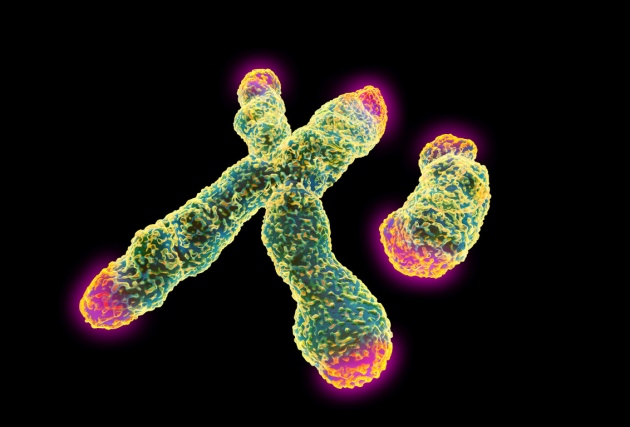 Telomeres (shown in red) protect the ends of chromosomes from fraying over time.

Growing up in a stressful social environment leaves lasting marks on young chromosomes, a study of African American boys has revealed. Telomeres, repetitive DNA sequences that protect the ends of chromosomes from fraying over time, are shorter in children from poor and unstable homes than in children from more nurturing families.

When researchers examined the DNA of 40 boys from major US cities at age 9, they found that the telomeres of children from harsh home environments were 19% shorter than those of children from advantaged backgrounds. The length of telomeres is often considered to be a biomarker of chronic stress.

The study, published today in the Proceedings of the National Academy of Sciences1, brings researchers closer to understanding how social conditions in childhood can influence long-term health, says Elissa Epel, a health psychologist at the University of California, San Francisco, who was not involved in the research.

Participants’ DNA samples and socio-economic data were collected as part of the Fragile Families and Child Wellbeing Study, an effort funded by the US National Institutes of Health to track nearly 5,000 children, the majority of whom were born to unmarried parents in large US cities in 1998–2000. Children's environments were rated on the basis of their mother's level of education; the ratio of a family’s income to needs; harsh parenting; and whether family structure was stable, says lead author Daniel Notterman, a molecular biologist at Pennsylvania State University in Hershey.

The link between stressful home environments and telomere length is moderated by genetic variants in pathways that process two chemical transmitters in the brain, serotonin and dopamine, the study found. Previous studies have correlated variants in some of the genes studied, such as TPH2, with depression, bipolar disorder and other mental-health issues. Variants of another gene, 5-HTT, reduce the amount of the protein that recycles serotonin in nerve synapses. Some alleles of these genes are thought to increase the sensitivity of carriers to external risks.

In the latest study, the researchers found that the 'sensitizing' variants of these genes protected telomeres in children from nurturing environments, and caused greater telomere damage in children from disadvantaged homes. Those who lacked these alleles had little difference in their telomeres, regardless of living conditions.

But boys with more than two sensitizing alleles were strongly influenced by their home environments. They had the shortest telomeres in stressful homes, and the longest telomeres in advantaged environments. Although these variants were known to influence chemical responses to stress in the brain, they were not previously linked to telomere length, says Notterman.

The team plans to expand its analysis to approximately 2,500 children and their mothers to see if these preliminary findings hold. However, because the effects of stress are tangible by the age of 9, Notterman suggests that early intervention practices may help to moderate the effects of adversity on children’s health.

“This was a small study testing a big theory,” says Epel. “It is a first but important step in understanding how social disparities get under the skin to affect lifelong health.”