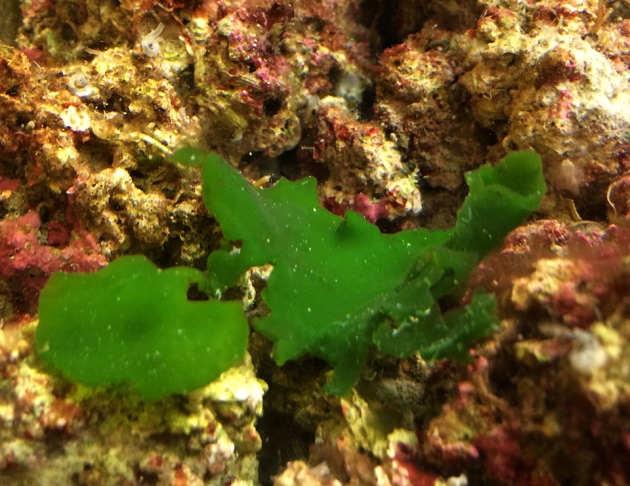 Seaweed in the order Palmophyllales, such as the specimen shown here, live at great depth.

How the first plant came to be

A mysterious deep-ocean seaweed diverged from the rest of the green-plant family around 540 million years ago, developing a large body with a complex structure independently from all other sea or land plants. All of the seaweed’s close relatives are unicellular plankton.

The finding, published today in Scientific Reports1, upends conventional wisdom about the early evolution of the plant kingdom. “People have always assumed that within the green-plant lineage, all the early branches were unicellular,” says Frederik Leliaert, an evolutionary biologist at Ghent University in Belgium. “It is quite surprising that among those, a macroscopic seaweed pops up.”

There are only a few described species in this odd order of sea life, known as the Palmophyllales. All live at great depth, usually more than 80 metres below the surface. Five years ago, Leliaert was one of the team that first investigated the order’s genetics. But even though it looked superficially like many green algae, the seaweed turned out to be only very distantly related to any other macroscopic green algae or land plant2. At this point, the scientists could do little more than show that the species was very different.

When Earth greened over

Now the researchers have mapped the strange seaweed’s place in the tree of life, using a specimen dredged from the Gulf of Mexico after the 2010 Deepwater Horizon oil spill. The work became more feasible as next-generation sequencing technologies dropped the price for a detailed look at the genome of Palmophyllales' chloroplast — the energy-producing structure in a plant cell — to roughly US$8,000.

With more genes in hand, the scientists could better compare Palmophyllales to an ever-growing collection of green algae. It also allowed the researchers to use phylogenetic software to pinpoint when Palmophyllales branched off from related plant species.

It turns out that the group diverged from the rest just after the green plants themselves split into their two main lineages, back when such plants were newfangled upstarts.

Brent Mishler, a botanist at the University of California, Berkeley, finds the new work to be convincing. “It nails down the relationships,” he says. “The green plants are one of the most diverse branches on the tree of life, with a half million species that range in size from planktonic unicells to redwood trees. This paper makes a huge contribution to unravelling how this enormous and important lineage got started.”

But although Palmophyllales split off early from other plants, its macroscopic size might not have developed until later in its evolution. And Leliaert says that he’s wary of calling the seaweed “multicellular” because its cells are undifferentiated and suspended in a stiff gel. Still, he says, the whole plant has a distinct structure that includes a root-like holdfast, a stem, and blades. How the cells of the plant communicate with one another remains unknown.

For Charles Delwiche, a molecular systematist at the University of Maryland in College Park, and one of the principal investigators of the Assembling the Green Algal Tree of Life project that supported the work, the result shows how little is known about green algae, despite the fact that they gave rise to all land plants.

“We still need to do a lot more sampling of those lineages,” says Delwiche. “I think the tree of life will become a lot more shrubby.”