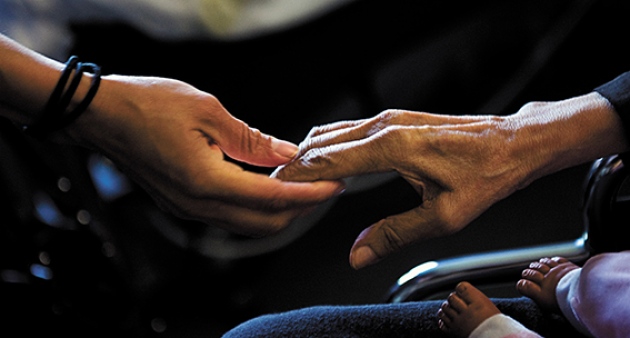 The number of people living with Alzheimer's is on the rise — one in ten people aged 65 or over now has the disease.

In 2015, the global cost of Alzheimer’s disease was US$818 billion. That’s similar to the gross domestic product of the world’s 18th-largest economy. By 2030, the number of people with the disease is expected to rise to more than 70 million worldwide (see ‘Staying ahead’).

Unless there is a breakthrough in treatment, nearly one in every 2–3 people over 85 will have Alzheimer’s. Even those who escape the disease will have at least one close friend or relative who can no longer converse with them, has no recollection of what happened minutes before and is reliant on round-the-clock care.

Clinical trials have predominantly focused on therapies aimed at treating people who have developed symptoms (memory loss, confusion and difficulties communicating) and begun to lose independence. In the past five years, investigators have started trials at an earlier stage — when memory loss is mild or absent but brain scans reveal the hallmark pathology of amyloid-β protein plaques. However, we think that the clock should be turned back even further — to when the signature brain pathology hasn’t yet appeared.

An important precedent for such ‘primary prevention’ is statins. In the early 1980s, these now-widespread medications were shown to lower blood cholesterol in people with a rare genetic disorder that severely elevates it. People with the condition (around 0.005% of the population) typically develop cardiovascular symptoms as adolescents or young adults. Without treatment, they typically die in their 30s1. But when statins are given to such people in childhood, the onset of heart disease and stroke is delayed by decades, and lifespan prolonged by between 15 and 30 years.

The search for an Alzheimer’s ‘statin’ is an imperative next step thanks to recent advances in our understanding of Alzheimer’s pathology and the establishment of a committed group of people who are keen to take part in clinical trials. All that remains is for pharmaceutical companies, along with public and private agencies, to provide the necessary resources, including funding.

In the 1980s, recognizing the imminent threat of an Alzheimer’s catastrophe, the US National Institutes of Health began funding Alzheimer’s Disease Centers throughout the United States. Other countries, such as the United Kingdom, made similar investments. As our understanding of Alzheimer’s grew, academic researchers and the pharmaceutical industry increased their efforts to identify drugs to treat the symptoms of the disease. 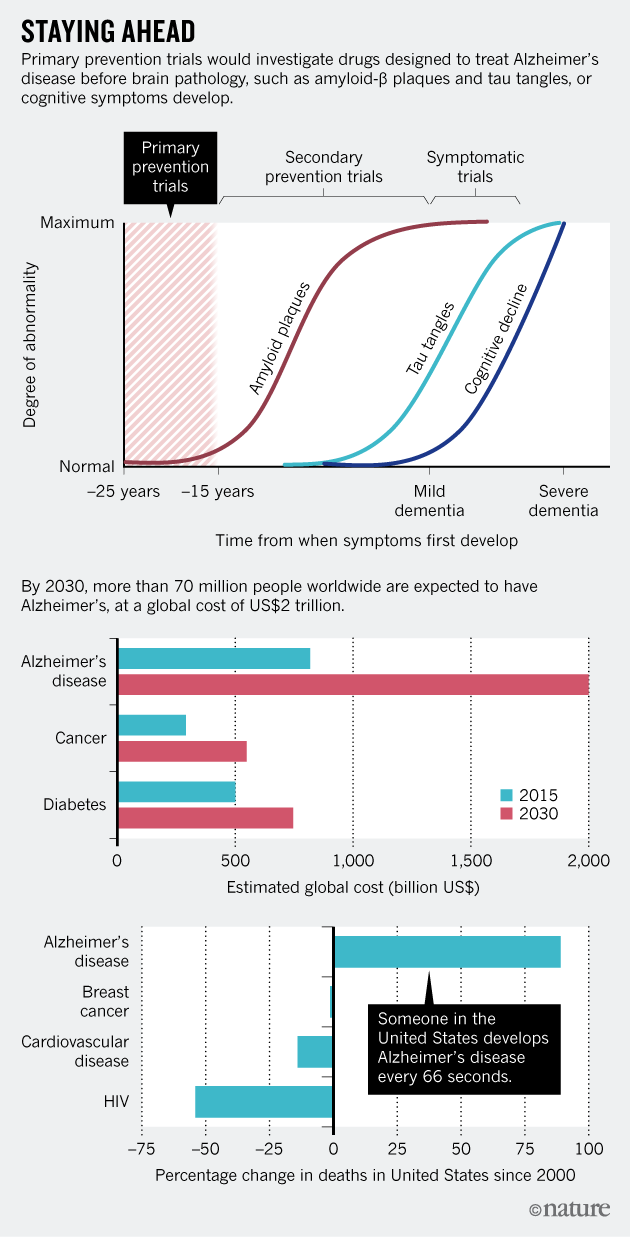 Many early efforts sought to relieve memory loss by blocking the degradation of the neurotransmitter acetylcholine. Autopsies had revealed that neurons dependent on it were severely depleted in the brains of people with Alzheimer’s. In the late 1990s, researchers shifted their focus to the amyloid-β plaques and tau tangles that are thought to damage the brain. Hundreds of drug trials have targeted different forms of amyloid-β with the aim of removing plaques or stopping them from developing.

But these efforts involved people who were 20 years or more into the pathological process. By then, neurons have begun to die and the brain has started to shrink. Of the four drugs that have been approved (three based on acetylcholine), none alters the course of the disease or treats the symptoms to a degree that’s detectable in individuals. Scores of other drug candidates have had no effect on amyloid-β plaques in humans. Some have even had serious adverse effects; an experimental amyloid-β vaccine caused inflammation in the brain of several patients. Just a few recent exceptions have robustly removed amyloid plaques or dramatically lowered the levels of a plaque precursor in clinical trials2, 3.

In the past five years, clinical trials have begun an attempt to reduce the progression of brain pathology before symptoms develop. Of the more than 11 such trials now under way or planned, all enrol people with increased risk of Alzheimer’s disease, as indicated by their genetics or brain scans showing plaques4. These trials hold great promise.

But in our view, recent developments on four fronts make now the moment to start clinical trials for drugs to prevent brain pathology.

Scientific evidence There are various indications that addressing the disease at its earliest stages will increase the likelihood of a single drug with a single target being effective. Studies in mice genetically altered to develop amyloid-β plaques have shown that therapies that lower amyloid-β production are most effective when administered before the plaques have developed5, 6. Other studies indicate that Alzheimer’s progression may become a runaway process after a certain point — one that is not linked to a specific pathology. For example, the spread of tau tangles seems to be triggered by the presence of amyloid-β plaques7, 8. Once started, the establishment of the tangles seems to continue unabated, even after amyloid-β has been removed. Thus, anti-amyloid drugs may have limited effectiveness after a certain point.

“The best way to test the role of amyloid-β pathology is to stop it from taking hold in the first place.”

Researchers now have detailed knowledge about the sequence of changes in the brain that occur during the asymptomatic phase of Alzheimer’s disease. Plaques are followed by changes in brain metabolism; these are followed by alterations in tau deposition and inflammation. These insights have come largely from observational studies. The Dominantly Inherited Alzheimer Network (DIAN), for instance, has tracked more than four decades of disease stages — from before any symptoms show to advanced dementia — in hundreds of people who carry genetic mutations that cause Alzheimer’s disease.

Such knowledge provides researchers with a suite of biomarkers to test the efficacy of treatments after three to five years. That’s a time frame that is likely to be palatable to those funding trials such as pharmaceutical companies. Better diagnostic tools, involving brain-imaging techniques and the analysis of cerebrospinal fluid, are also now available to measure disease progression.

Trial population Less than 1% of all those diagnosed with Alzheimer’s have dominantly inherited Alzheimer’s disease (DIAD). People with this form develop amyloid-β plaques in their brains in their 20s and 30s, and their children have a 50% chance of inheriting the condition. Crucial to the success of primary prevention trials is the increased involvement in research of families affected by DIAD.

With the knowledge that symptoms will appear at a predictable time in people carrying the mutations that cause DIAD9, researchers can track changes in brain pathology, starting many years before symptoms are expected to appear. DIAD mutations all affect the amyloid-β production pathway. So, even for people with different mutations (230 are known), amyloid plaques are a common target to focus on — one that is shared with the much more common late-onset Alzheimer’s disease. 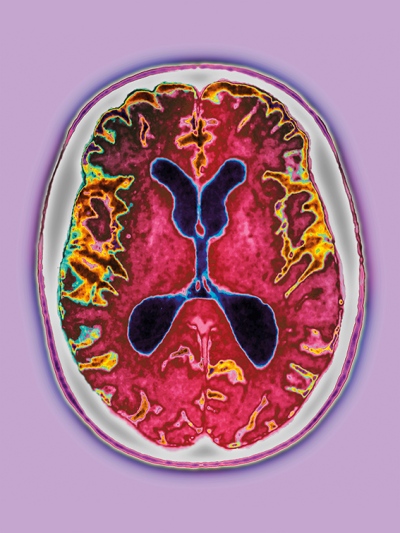 Magnetic resonance imaging scan showing damage (orange) in the brain of a person with Alzheimer's.

Of course, how exactly the results from a rare genetic form of Alzheimer’s disease will translate to the more common form is uncertain. But there is strong evidence that the fundamental processes that lead to dementia are very similar. Trying to identify who in the general population will get Alzheimer’s, and predicting when they will develop amyloid-β pathology, would require trials involving many thousands of people.

Those who carry DIAD mutations would almost certainly enrol in primary prevention trials — even though it may take ten years or more to demonstrate the effects of a drug on cognition. Ongoing trials such as the DIAN Trials Unit (DIAN-TU), have demonstrated that it is possible to enrol appropriate numbers of families (several hundred people) with dominantly inherited mutations. In fact, the DIAN-TU trial has one of the best rates of enrolment, retention and completion of any trials in Alzheimer’s disease, owing to highly committed family members. When we surveyed people at risk of familial Alzheimer’s disease using our DIAN Expanded Registry (www.DIANexr.org) more than 90% of the 80 respondents said that they would be willing to stay in trials for “as long as the study requires to arrive at an answer about the drug’s efficacy”.

Effective and safe therapies Amyloid-β is an ideal target for primary prevention; numerous findings indicate that its abnormal metabolism is the cause of DIAD.

There is now strong evidence that a rare mutation protects some populations from developing plaques in their brains. In Iceland, for example, the chance of carriers of this mutation (which reduces the production of amyloid-β) developing dementia is one-fifth that of the general population10. Over the past few years, this genetic effect has been mimicked with various medications3. Around a dozen therapies that target enzymes involved in the production of amyloid-β in various phases of clinical trial reduce the production of the protein3 by as much as 70–80%. Moreover, drugs that target enzymes such as BACE and gamma secretase can be taken orally (other drugs that target amyloid-β have to be given by injection), and newer generations of these classes of compounds seem to have few serious side effects.

Funding and regulation It could take ten years or more of primary prevention trials based on cognitive or clinical outcomes for regulatory agencies to approve drugs for prevention. Few pharmaceutical companies are willing to pay for the majority of expenses in such long trials. Recognizing the urgency of the problem, governments, particularly those of the United States and Europe, are increasingly supporting the development of prevention initiatives (see go.nature.com/2ubyv5k and go.nature.com/2tdrn4f).

Another encouraging development within the past four years is that guidelines for the approval of Alzheimer’s drugs from the US Food and Drug Administration and European Medicines Agency now include the consideration of the effects of compounds on surrogate biomarkers, such as amyloid-β plaques, in addition to tests of memory. (So far, there has been no case of a drug for Alzheimer’s being approved only on the basis of a biomarker.)

Some researchers may object to our proposal to make amyloid-β the target of primary prevention trials. Around ten large trials that target amyloid-β plaques have failed over the past five years or so. In our view, the various explanations for these failures11 can be summarized as ‘too little, too late’. The best way to test the role of amyloid-β pathology in Alzheimer’s disease is to stop it from taking hold in the first place.

Some scientists are also concerned that a single drug is unlikely to be sufficient to treat such a complex, chronic disorder. But, as demonstrated in familial hypercholesterolaemia, one drug can be extremely effective when used for prevention. What is needed now is engagement from all stakeholders — including public and private funders — who need to commit hundreds of millions of dollars.

The stakes are extraordinarily high. If successful, a primary prevention treatment could avert the loss of memories, thoughts and independence for a significant proportion of the world’s older population.

R.J.B. receives lab research funding from the Tau SILK Consortium (AbbVie, Biogen and Eli Lilly and Co.), funding for clinical trials from Eli Lilly, Roche, Janssen, Avid Radiopharmaceuticals and research funding from the DIAN Pharma Consortium (Abbvie, Amgen, AstraZeneca, Biogen, Eisai, Eli Lilly, Roche, Janssen, Pfizer and Sanofi). He has received honoraria from Janssen and Pfizer as a speaker, and income from Merck C2N Diagnostics and Pfizer as an Advisory Board member. Washington University, R.J.B. and David Holzman (chair of the Department of Neurology) have equity ownership interest in C2N Diagnostics and receive royalty income based on technology (stable isotope labelling kinetics and blood plasma assay) licensed by Washington University to C2N Diagnostics.