Fluorine gas is so reactive that any naturally-occurring whiffs cannot exist for more than a few fleeting seconds. At least, that has been the conventional wisdom for more than a century.

Now, chemists have proved that a smelly rock is the only known place on Earth where fluorine exists in its elemental form, F2.

The rock is antozonite, a calcium fluoride (fluorite) mineral that is dark violet or even black in colour, also known as fetid fluorite or stinkspar. Needless to say, this rock stinks. The pungent smell is given off when antozonite is crushed, and chemists and mineralogists have argued over the origin of the stench since the early nineteenth century. 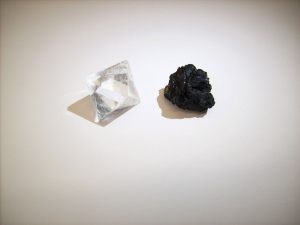 The mineral antozonite (right) has been found to contain pockets of elemental fluorine gas, unlike fluorite (left).

When fluorine gas was first isolated by French chemist Henri Moissan in 1886, he was sent a sample of antozonite to study, explains chemist Florian Kraus from the Technical University of Munich in Germany, who carried out the latest analysis of the mineral with his colleagues1. Moissan had concluded that the rock contained pockets of fluorine that were released on crushing, and “from the chemists’ point of view the debate would have been over”, says Kraus.

But mineralogists didn’t agree. They suggested that pockets of liquids in the rocks must have been breached, releasing equally smelly hydrocarbons, phosphorous or selenium, says Kraus. And fluorine’s extraordinary reactivity means that it doesn't hang around for long in the wild — it normally exists as negatively charged fluoride ions in combination with other elements.

Chemists were able to show that the smelly substance was a very strong oxidizing agent, but chemical analysis at that time couldn’t definitively prove that it was fluorine.

Fast-forward to the present day, when Kraus stumbled across an ambiguous sentence in a text book suggesting that if there was any chance of fluorine existing in nature, it would be in antozonite. Kraus resolved to settle the matter once and for all.

His first task was to smell the crushed rock — and he immediately recognized the stench: “A fluorine chemist knows at once how fluorine smells,” he says.

To find out more, Kraus turned to nuclear magnetic resonance (NMR) spectroscopy, which can reveal the identity and relative positions of atoms in a sample on the basis of how their nuclei respond to a pulse of radio waves. Kraus persuaded his colleague Jörn Schmedt auf der Günne to put a sample of antozonite in his multimillion-dollar solid-state NMR spectrometer. With the sample still uncrushed, the pockets of fluorine should stay intact, he reasoned.

Thanks to a new NMR method that Schmedt auf der Günne developed for the test, “at once we saw this very sharp signal where fluorine should be”, says Kraus. The signal matches up nicely with other elemental fluorine spectra, agrees Alan Brisdon, a fluorine chemist at the University of Manchester, UK, who wasn’t involved in the work.

Clues from previous experiments suggested how fluorine might be formed in the rocks. The experiments exposed artificial calcium fluoride to β- and γ-radiation, and high-energy electron beams. The samples often turned violet, because the radiation was splitting calcium fluoride apart to form clusters of calcium ions. Subsequent tests showed that bubbles of fluorine gas were also forming in the lenses.

The same process could explain the stench of antozonite, says Kraus. The mineral contains tiny amounts of radioactive uranium-238, which decays into β-emitting daughter nuclides. The rocks have been lying around for 100 million years, says Kraus, which is enough time for the radioactive decay to produce the same effect as seen in the artificial fluorite experiments.

“There were people that had the correct answer before, but others didn’t believe them,” says Kraus. Now, he says, the evidence is “beyond any discussion”.