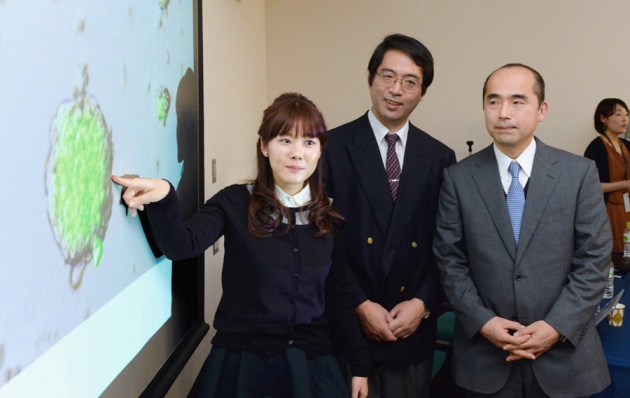 In a January 2014 press conference in Kobe, Japan, Haruko Obokata points to microscope pictures of mouse cells engineered to glow green to indicate a stem-cell status.

Haruko Obokata, the Japanese stem-cell biologist whose papers caused a sensation earlier this year before being retracted, has not succeeded in an attempt to replicate the controversial experiments, the Japanese media has reported.

The original papers, which Obokata co-authored and published in Nature in January1, 2, claimed to provide a way of producing 'pluripotent' stem cells — cells with the ability to develop into almost any cell type in the body — by a much easier route than used by earlier methods, including a technology that won the 2012 physiology Nobel prize. Obokata's technique involved inducing pluripotency in mouse adult cells by subjecting them to stress, such as physical pressure or exposure to acid. The technique was called stimulus-triggered acquisition of pluripotency, or STAP.

The papers garnered much excitement, but immediately came under attack by social media that noted apparently manipulated images. Investigations by the RIKEN Center for Developmental Biology in Kobe, where Obokata works, found that she had committed scientific misconduct, and the papers were retracted.

Obokata, however, stood by her results, and the RIKEN Center gave her until the end of November to prove that she could reproduce them.

In the experiments, the cells were engineered to glow with green fluorescence when they expressed genes related to pluripotency. Obokata's repeat experiments reportedly produced such green glowing cells. But this is only a preliminary test and involves just a few such cells. More rigorous tests, including the introduction of the cells to a mouse embryo to see whether they could contribute to various tissues in a developing animal, did not produce the hoped-for results.

An official announcement will be made at a press conference on 19 December.