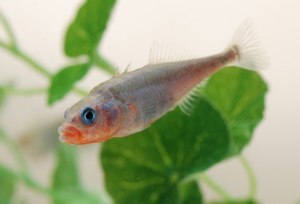 Freshwater sticklebacks such as this one have evolved from marine ancestors on many different occasions.

Scientists have pinpointed mutations that may help a tiny armoured fish to evolve quickly between saltwater and freshwater forms.

Since the last ice age ended about 10,000 years ago, ocean-dwelling threespine sticklebacks have repeatedly colonized streams and lakes worldwide. In as few as ten generations —  an evolutionary blink of an eye — marine sticklebacks can swap their armoured plates and defensive spines for a lighter, smoother freshwater form.

David Kingsley, an evolutionary biologist at Stanford University in California, and his colleagues have now identified the DNA differences that distinguish ocean and freshwater sticklebacks around the world. Even though the switch has occurred on multiple separate occasions, it seems to involve many of the same genetic changes each time.

To trace the key DNA differences, the researchers sequenced the entire genetic code of 21 sticklebacks from ocean and freshwater sources on three continents. The results are published in Nature today1.

The researchers found that, over most of the genomes, freshwater sticklebacks were most similar to their nearest ocean-dwelling neighbours. But in about 150 DNA sequences, freshwater and saltwater populations were each more like their counterparts in the same environments across the globe. These sequences included genes affecting armour growth and salt processing in the kidney.

“It’s a series of adaptations that affect many aspects of the organism: the shape of the fish, its behaviour, diet and mating preferences,” says evolutionary biologist Greg Wray at Duke University in Durham, North Carolina, who was not involved in the study.

The similarities between freshwater populations worldwide suggest that the fish do not evolve new features from scratch each time, says Kingsley. Rather, a few ocean-dwelling fish may retain ancient genetic adaptations to freshwater living that allow them to colonize new sites. The first few generations display mixed or intermediate features, but eventually the genes that allow the fish to adapt to fresh water dominate.

“On a genome-wide scale, we’ve found a whole set of regions being used over and over to adjust to new environments,“ says Kingsley. “We’re able to study the molecular basis of vertebrate evolution.”

The stickleback’s freshwater adaptations had previously been mapped to broad regions of the genome2. But adaptive mutations had been identified for only a few genes.

Researchers have debated about the types of mutations that could enable species to adapt to new environments. Some have championed the importance of regulatory changes — mutations that affect when and where existing genes are expressed. Others have stressed a role for coding changes, mutations that alter the proteins produced from genes.

Kingsley’s group found that about 80% of freshwater adaptations are probably situated in regulatory DNA, with the remaining 20% affecting coding DNA.

Regulatory changes could speed the stickleback’s adaptation by controlling gene expression in multiple tissues with each mutation. The study also shows that stickleback evolution is accelerated by the use of pre-existing genetic variation, instead of waiting for new, random mutations to arise, Wray explains.

“I think the paper is really nice, and I’m convinced by the data,” says Hopi Hoekstra, an evolutionary biologist at Harvard University in Cambridge, Massachusetts. However, she adds, “it could be very different — in terms of the fraction of mutations that are coding or regulatory — in an organism that had a much simpler genome, or adapted much more slowly.”

The same method could be applied to other organisms that have evolved multiple times to similar environmental changes, says Wray. Mice, for example, have evolved different fur colors for deserts, woodlands, and grasslands worldwide.“I’m guessing that we’ll see a whole series of papers,” he says.