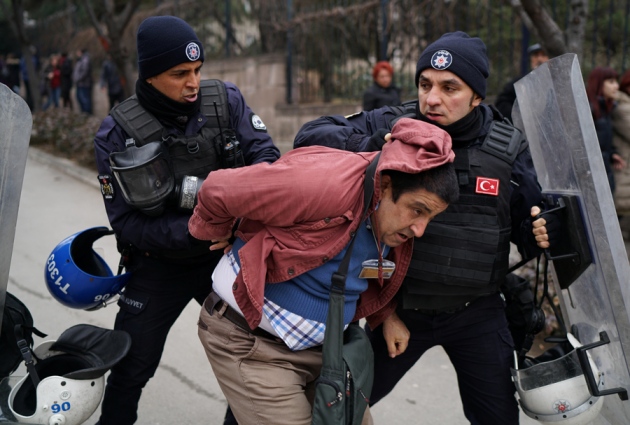 Police at Ankara University in Turkey broke up protests against the dismissal of academics.

The temperatures in Istanbulare wintry, yet it is officially summer time. The Turkish government last year shifted the clocks to a permanent summer mode, aligning the country with Moscow time and forcing the majority of its citizens to live out of sync with the Sun. Scientists complain that it makes neither astronomical nor biological sense. Still, researchers have a lot more to put up with from their government, led by former prime minister and current President Recep Tayyip Erdoğan, who is displaying increasingly authoritarian tendencies.

But, as a News Feature notes this week, Erdoğan has high hopes for science, to support his grandiose plan for Turkey to be among the world’s top ten largest economies by 2023, its centenary year. He has set in motion plans for a broad and systematic expansion of research — even as he is frightening away the scientists who will be needed to populate it.

The plans may be under threat. The country was badly shaken by a coup attempt last July, and a continuing state of emergency has been used to purge state organizations, including universities, of people associated with the Gülen movement, a religious organization believed to be behind the attempt. In waves of decrees ordering mass dismissals, many thousands of academics have lost their jobs. Last week at Ankara University, police violently broke up protests against the latest wave. A decree issued last month strips citizenship from those who fail to return from abroad for government questioning when ordered — some academics now find themselves away from home and stateless. In addition, the government has seized hundreds of allegedly pro-Gülen companies, spooking the business world and scaring off investors.

The government’s research-expansion plans rely on the country being attractive to scientists, including its large, highly educated diaspora. But, like other professionals, scientists are put off by the threatening atmosphere of political uncertainty in Turkey. Doing science there had challenges enough, they note — from import rules that make buying consumables slow and expensive, to the over-centralized state university system, which adds layers of bureaucracy andstifles innovation. Fearing for personal and financial security on top of this is hardly going to make the new jobs now being created any more attractive to researchers.

“Turkey is out of sync with its scientists.”

The tumultuous political situation goes way beyond science. But even amid the turmoil, steps could be taken to help stave off a brain drain that no one wants. First, to give researchers more confidence, the government should immediately stop the destabilizing waves of university dismissals that seem to be doing much more harm than good. Second, it should not be distracted from its science-expansion plans, which will require major financial commitments in the next couple of years. It is right to consider this a fundamental building block of the country’s future. These plans include tentative steps towards a little more competition and a bit less government control. A slow start is probably pragmatic, given the risk of backlash from a highly conservative government. But those efforts need to ramp up significantly in the next few years. Third, pointless hindrances for researchers should be removed — so, for instance, goods used in scientific research should be exempted from import rules.

What can the academic community outside Turkey do to help support colleagues in Turkey? Moral support is welcome, for example public recognition for the independent national science academy, Bilim Akademisi, as an organization that upholds academic standards. It was created in 2011 when the government filled the Turkish Academy of Sciences with its own appointees. Bilim Akademisi has no government support, but on a shoestring it carries out the most important activities of an academy. It awards small but prestigious prizes to the best fledgling Turkish scientists, and issues honest statements about the current situation for academia in clear but non-inflammatory language. It is also keeping a sober record of the fate of academics in this state of emergency, which will serve posterity. ALLEA, the federation of European national academies, will have the opportunity in September to vote to upgrade Bilim Akademisi from associate to full membership. It should do so.

When, in October 2015, Aziz Sancar became the first Turkish scientist to win a Nobel prize, astronomical events seemed to endorse the country’s science potential. A celestial conjunction around that time meant that when the Moon was a thin crescent, Venus shone star-like below its curve to create the Turkish flag on high. Yet the government has yet to show the same endorsement, putting Turkey out of sync with its scientists as well as with the Sun. Winter is not just coming — it seems to have arrived. But science can help with the thaw.