Stem cells have assumed near-mythical status in the popular imagination as a possible cure for every disease under the sun. But while public attention has focused on their potential in regenerative medicine, stem cells have quietly gained a foothold in drug development — a move that may hail a huge but unheralded shake-up of the biological sciences.

“I think there are tremendous parallels to the early days of recombinant DNA in this field,” says James Thomson, director of regenerative biology at the Morgridge Institute for Research in Madison, Wisconsin, and one of the founders of Cellular Dynamics International, also in Madison. “I don’t think people appreciated what a broad-ranging tool recombinant DNA was in the middle '70s." At the same time, he says, they underestimated the difficulty of using it in treatments.

Now stem cells are in a similar situation, he says, and although therapeutic use is likely to come to fruition eventually, “people underappreciate how broadly enabling a research tool it is”, he says. 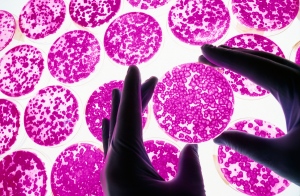 Laboratory-grown stem cells hold much promise for regenerative medicine, but are being increasingly used in drug testing.

Drug companies began dipping a tentative toe into the stem-cell waters about two years ago (see 'Testing time for stem cells'). Now, the pharmaceutical industry is increasingly adopting stem cells for testing the toxicity of drugs and identifying potential new therapies, say those in the field.

Cellular Dynamics sells human heart cells called cardiomyocytes, which are derived from induced pluripotent stem (iPS) cells. Thomson says that “essentially all the major pharma companies” have bought some. The company also produces brain cells and cells that line blood vessels, and is about to release a line of human liver cells.

Yet Cellular Dynamics is just one of the companies in the field. Three years ago, stem-cell biologist Stephen Minger left his job in UK academia to head GE Healthcare’s push into stem cells (see 'Top scientist's industry move heralds stem-cell shift'). The medical-technology company, headquartered in Chalfont St. Giles, UK, has been selling human heart cells made from embryonic stem (ES) cells for well over a year, and is due to start selling liver cells soon.

Minger and his team at GE Healthcare assessed the heart cells in a blind trial against a set of unnamed drug compounds to see if the cells would reveal which compounds were toxic. When the compounds were unmasked, Minger says, they found that the cells had been affected by the known toxic compounds. But, crucially, in a number of cases, the cells identified a problem that had only been discovered after the drugs had reached the market — and after they had been approved by agencies such as the US Food and Drug Administration (FDA).

“These are compounds which went all the way through animal testing, then went through phase I, II, III and then were licensed in many cases by the FDA,” says Minger.

In addition to the obvious health benefits, using stem cells to weed out drugs with dangerous side effects before they reach the market could save the industry millions of dollars in wasted development costs. They could also be valuable tools for the discovery of new drugs, an application for which both Cellular Dynamics and GE Healthcare market their cells.

“Many of the animal models out there are poor, demonstrating great efficacy in the mouse, but not repeating in man during late-stage clinical trials. Therefore having an in vitro model years before, which can actually recapitulate human disease, would be a huge advantage,” says Adam Rosenthal, senior director for strategic and corporate development at iPierian, a biopharmaceutical company based in San Francisco, California.

Rather than selling its product to other drug companies, iPierian is using them in house to develop treatments for neurodegenerative diseases such as Alzheimer’s. Earlier this week, the company announced that it would be pushing forward with developing monoclonal antibodies that target the tau proteins thought to be important in Alzhiemer’s disease, as well as investigating another set of proteins implicated in neurodegeneration. The decision was based on insights from stem-cell work, says the company.

A way to go

There are still a number of unknowns in the nascent field. Lee Rubin, co-founder of iPierian and director of translational medicine at the Harvard Stem Cell Institute in Cambridge, Massachusetts, says that there is debate over whether stem cells can be used to study certain types of disease, particularly non-genetic or late-onset disorders and those that are linked to interactions between different tissues.

In his research, Rubin uses stem cells as a model of spinal muscular atrophy, a group of early onset genetic disorders. He points out that the only way to really prove that using stem cells for drug discovery is a better system is to find a drug and show that it works in people.

But stem cells are likely to find even wider uses than drug-development work, says Thomson.

“What human ES cells and iPS cells now do is give you access to the basic building blocks of the human body, just for basic study,” says Thomson. “We will understand the human body at a much greater detail because of these cells.” Exactly how the cells will be used are not clear, he says, adding, “But I do think it will profoundly change human medicine.”