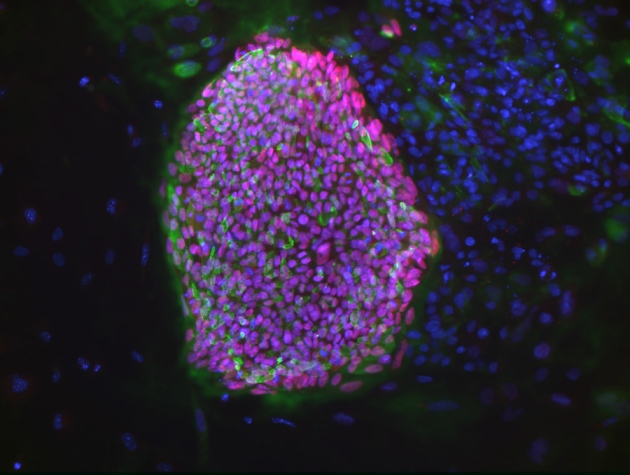 This colony of embryonic stem cells, created from a type 1 diabetes patient, is one of the first to be cloned from an adult human.

Two research groups have independently produced human embryonic stem-cell lines from embryos cloned from adult cells. Their success could reinvigorate efforts to use such cells to make patient-specific replacement tissues for degenerative diseases, for example to replace pancreatic cells in patients with type 1 diabetes. But further studies will be needed before such cells can be tested as therapies.

The first stem-cell lines from cloned human embryos were reported in May last year by a team led by reproductive biology specialist Shoukhrat Mitalipov of the Oregon Health & Science University in Beaverton (see 'Human stem cells created by cloning'). Those cells carried genomes taken from fetal cells or from cells of an eight-month-old baby1, and it was unclear whether this would be possible using cells from older individuals. (Errors were found in Mitalipov's paper, but were not deemed to affect the validity of its results.)

Now two teams have independently announced success. On 17 April, researchers led by Young Gie Chung and Dong Ryul Lee at the CHA University in Seoul reported in Cell Stem Cell that they had cloned embryonic stem-cell (ES cell) lines made using nuclei from two healthy men, aged 35 and 752. And in a paper published on Nature's website today, a team led by regenerative medicine specialist Dieter Egli at the New York Stem Cell Foundation Research Institute describes ES cells derived from a cloned embryo containing the DNA from a 32-year-old woman with type 1 diabetes. The researchers also succeeded in differentiating these ES cells into insulin-producing cells3.

To produce the cloned embryos, all three groups used an optimized version of the laboratory technique called somatic-cell nuclear transfer (SCNT), where the nucleus from a patient's cell is placed into an unfertilized human egg which has been stripped of its own nucleus. This reprograms the cell into an embryonic state. SCNT was the technique used to create the first mammal cloned from an adult cell, Dolly the sheep, in 1996.

The studies show that the technique works for adult cells and in multiple labs, marking a major step. “It's important for several reasons,” says Robin Lovell-Badge, a stem-cell biologist at the MRC National Institute for Medical Research in London.

At present, studies to test potential cell therapies derived from ES cells are more likely to gain regulatory approval than those testing therapies derived from induced pluripotent stem (iPS) cells, which are made by adding genes to adult cells to reprogram them to an embryonic-like state. Compared with iPS cells, ES cells are less variable, says Lovell-Badge. Therapies for spinal-cord injury and eye disease using non-cloned ES cells have already been tested in human trials. But while many ES cell lines have been made using embryos left over from fertility treatments, stem cells made from cloned adult cells are genetically matched to patients and so are at less risk of being rejected when transplanted.

Lovell-Badge says cloned embryos could also be useful in other ways, in particular to improve techniques for reprogramming adult cells and to study cell types unique to early-stage embryos, such as those that go on to form the placenta.

Few, however, expect a huge influx of researchers making stem cells from cloned human embryos. The technique is expensive, technically difficult and ethically fraught. It creates an embryo only for the purpose of harvesting its cells. Obtaining human eggs also requires regulatory clearance to perform an invasive procedure on healthy young women, who are paid for their time and discomfort.

About ten years ago, making human ES cells from cloned embryos was among the hottest areas of research, recalls Egli. Most stem-cell biologists shifted focus as convenient technologies for making iPS cells became established, but Egli did not. “I didn't think it was right to only try one approach when it was so important to find cures for these diseases,” he says.

He thinks that iPS cell lines work well for drug screening and basic research questions, but it is still unclear whether iPS cells or ES cells will work best as therapies. “If you had a choice, you would pick the one from nuclear transfer rather than iPS,” he says. This is because iPS cells often do not become completely reprogrammed or may become warped during the reprogramming process, which could make them less stable.

Even if cloned ES cells do prove better suited for therapy, creating a different ES cell line for each patient would probably not be necessary, says Robert Lanza, chief scientific officer at Advanced Cell Technology in Marlborough, Massachussetts, and a co-author on the Cell Stem Cell paper. Instead, he imagines, scientists would create banks of cell lines that could serve patients needing replacement tissues.

But that possibility may be many years away. First, researchers plan to compare iPS cells and ES cells derived from the same person, to see which might work best for drug screening or for making replacement tissues. These studies are well under way, but work is hampered in the United States because federal funds cannot be used to study cloned ES cells, notes Mitalipov.

Egli is hopeful that the recent work may bring other experts back to studying cloned ES cells, and perhaps even soften current funding restrictions, but he warns that progress could be slow. “The field needs some time to recover what has been lost.”

Public concerns remain that the technology could be used to clone a human baby — something widely condemned as unethical — and which is illegal in many countries. But Mitalipov thinks that rogue scientists attempting to do this are unlikely to succeed for technical reasons.

“We never got any offspring in the monkey, and we tried hard,” he says. Over several years, his team transplanted hundreds of cloned monkey embryos from laboratory dishes into healthy monkeys; only one embryo implanted successfully, and it stopped developing after two months4.