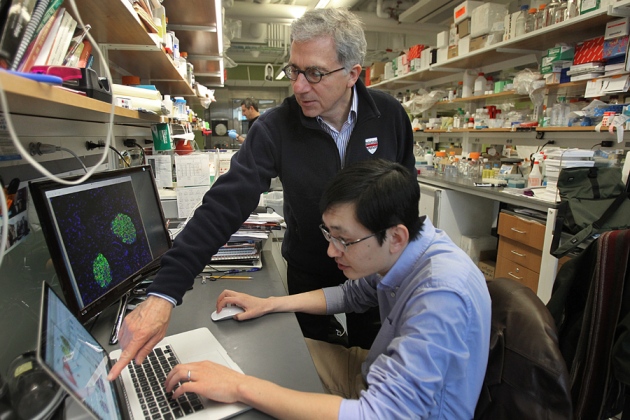 Each year, surgeon Jose Oberholzer frees a few people with type 1 diabetes from daily insulin injections by giving them a transplant of the insulin-secreting β-cells that the disease attacks. But it is a frustrating process. Harvested from a cadaver’s pancreas, the β-cells are in short supply and vary in quality. And the patients must take drugs to suppress their immune response to the foreign cells, which can in turn cause kidney failure.

On 9 October, stem-cell researcher Douglas Melton of Harvard University in Cambridge, Massachusetts, and his colleagues reported an advance that has the potential to overcome Oberholzer’s frustrations and allow many more people with type 1 diabetes to receive transplants. Melton and his team have achieved a long-term goal of stem-cell science: they have created mature β-cells using human stem cells that can be grown from a potentially unlimited supply, and that behave like the real thing (F. W. Pagliuca et al. Cell 159, 428–439; 2014). The next challenge is to work out how to shield these β-cells from the body’s immune response.

Researchers had previously created immature β-cells from stem cells and transplanted them into diabetic mice. But they take months to mature into insulin-secreting cells, and it is unclear whether they would do so in humans.

The β-cells reported by Melton’s team were grown from adult cells that had been reprogrammed to resemble stem cells. In response to glucose, the β-cells quickly secreted insulin, which the body uses to regulate blood sugar. When implanted in diabetic mice, the cells relieved symptoms within two weeks. The β-cells even formed clusters that are similar to those found in a pancreatic structure called the islet of Langerhans. “If you took these cells and showed them to somebody without telling them what they are, I guarantee you an expert would say that is a perfect human islet cell,” says Oberholzer, who is working with Melton’s team to test the cells in non-human primates.

A remaining hurdle is shielding the cells from immune attack. This is necessary if the treatment is to become more widely available, because immunosuppressant drugs can be justified only in the most severe cases of diabetes. And although mature β-cells could be derived from a patient’s own skin cells, type 1 diabetes is an autoimmune disease, so transplanted cells would still be vulnerable to attack.

One solution might be to encapsulate the cells in a credit-card-sized, biocompatible sheath made by ViaCyte of San Diego, California. The company will implant its first device — loaded with immature β-cells — in a patient on 21 October. Studies in animals have been promising, but some researchers worry that the cells inside the device are packed too densely and might become starved of oxygen and nutrients.

Another option is to coat cells in a protective hydrogel, which results in thousands of separate balls of cells. But a potential drawback is that it would be much harder to remove such cells if there was a safety concern, says Albert Hwa, director of discovery science at JDRF, a diabetes-research foundation in New York.

Neither technique avoids the body’s tendency to enclose foreign bodies inside scar tissue, which could cut the transplanted cells off from nutrients. Bioengineer Daniel Anderson of the Massachusetts Institute of Technology in Cambridge and his team are screening chemical compounds for a hydrogel that does not trigger this. Some, used with Melton’s cells, have shown promise in unpublished studies of diabetic primates, he says.

Still, for those people with diabetes who face life-threatening changes in blood-sugar level each day, mature β-cells could offer a big improvement without such devices, says Oberholzer. Many of his patients are relieved to be free of insulin injections: “They would much rather take immunosuppression,” he says.