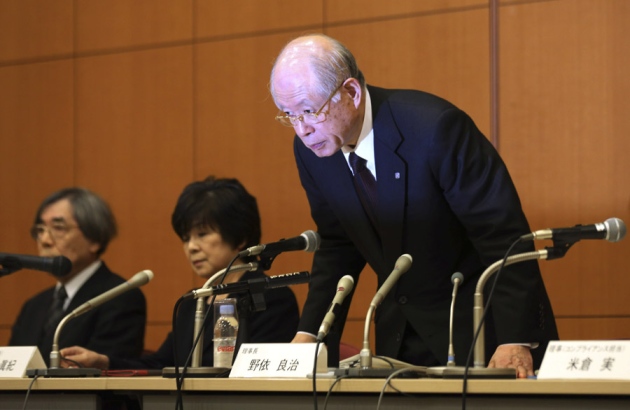 RIKEN president Ryoji Noyori bows during a press conference in Tokyo, where investigators revealed the results of their investigation into Haruko Obokata's research.

A committee investigating problems in papers claiming a method to apply stress to create embryonic like cells has found the lead researcher guilty of scientific misconduct.

The judgement is the latest twist — but not the final word — in the bizarre story of stimulus-triggered activation of pluripotency (STAP), a method that researchers at the RIKEN Center for Developmental Biology (CDB) in Kobe, Japan, still say is able to turn ordinary mature mouse cells into cells that share embryonic stem cells' capacity to turn into all of the body’s cells.

The technology was presented in two Nature papers1, 2 on 30 January by the CDB’s Haruko Obokata together with colleagues in Japan and the United States, but a slew of problems has been identified since then. (Nature’s news and comment team is editorially independent of its research editorial team.)

A six-person committee — three RIKEN scientists, two university researchers and a lawyer — looked at six problems. Four were dismissed as innocent errors, but in two cases the committee found that Obokata had manipulated data in an intentionally misleading fashion. They branded it scientific misconduct.

One problem concerned a figure showing electrophoresis gels. One lane in a diagram had been swapped for another. Obokata says that she made the switch because the other lane was clearer and she did not think it a problem. The committee found the swap to be intentionally misleading manipulation.

The committee also condemned Obokata’s use of an image from her doctoral thesis, in which the image, of a type of tumour called a teratoma, had been used to show the broad-ranging developmental capacity of cells she made by putting pressure on the cell membranes using a pipette. The image in the Nature paper was meant to show the same developmental capacity, but those cells were said to be made by stressing the cells with acid. Obokata said that she mistakenly added the wrong image. But the committee, noting that captions on the image had been changed, judged it to be fraudulent.

The committee repeatedly fended off questions about whether the technology works and, thus, whether STAP cells actually exist. “That is beyond the scope of our investigation,” said committee chair Shunsuke Ishii, a molecular biologist at RIKEN in Tsukuba, Japan.

In her letter, Obokata says that the spliced gel lane did nothing to change the study’s results. “There was no merit in falsifying data, and I had no intention of doing so when I made the image. I only wanted to have a better image,” she writes. Use of the duplicated image was also “a simple mistake” made because the images were similar. Obokata says that she had already identified the mistakes and sent Nature a correction.

Ishii says that Obokata provided teratoma slides that, she said, were from the Nature experiment. But, because of poor data management and the failure to properly label samples in the laboratory, “it’s impossible to know exactly where it came from,” he says.

A spokesperson for the journal says, "Nature does not comment on corrections or retractions that may or may not be under consideration. Nature takes all issues related to these papers very seriously, is conducting its own evaluation and considering the results of the RIKEN investigation. We cannot comment further at this stage."

Obokata says that the committee’s judgement of misconduct is “unacceptable” and that she plans to appeal it soon.

The committee also investigated the involvement of three co-authors, Yoshiki Sasai and Hitoshi Niwa, both at the CDB, and Teruhiko Wakayama, who left RIKEN last year for the University of Yamanashi, Japan.

Sasai, who helped Obokata write the paper, and Wakayama, in whose laboratory Obokata worked as a researcher before getting her own research unit, were cleared of involvement in the misconduct but found to carry responsibility for failure to check the data.

Both wrote letters of apology. In his, Sasai reaffirmed his belief that STAP works. “Even if the problematic data is removed, there are some results that can only be explained by STAP,” he writes.

The committee said that Niwa’s involvement started too late in the process to warrant censure.

During the press conference, reporters expressed frustration that the investigation didn’t go further. The committee limited itself to six problems, even though other problems have been flagged. Wakayama, for example, has already initiated genetic tests that have the potential to either identify serious inconsistencies in the protocol or support the paper’s claims, but the investigation committee said that it has not done any similar genetic studies on purported STAP cells from Obokata’s laboratory. In fact, they did not have clear answers about what materials were available.

Asked whether there was evidence that Obokata actually did the experiments, Ishii said that “it’s difficult to tell with any kind of rigour”, because the two notebooks she provided were missing dates and other essential information. Although he has overseen many junior researchers, “I have never experienced this kind of carelessness,” Ishii said.

RIKEN will now set up a committee to determine punishment. Meanwhile, a CDB team led by Shinichi Aizawa and Niwa will spend the next year trying to test whether the technique works. Any successful outcome will be cross-checked by a third party.

Kenneth Lee, a developmental biologist at the Chinese University of Hong Kong, says that he tried to reproduce Obokata’s results by following her protocol as closely as possible. Four attempts ended in failure. Asked whether RIKEN should spend another year trying to make STAP cells, Lee says: “it makes sense — but not with her method.”

On 2 April, Noyori sent an email to RIKEN staff in which he said he would "recommend the retraction of the one paper for which research misconduct has been confirmed." (The ultimate decision however still remains with the authors and Nature.) He also vowed to establish an internal "internal reform office", which he will head, in addition to a "committee of external experts to appraise our research procedures from the management of the data to the publication of results". He added that RIKEN will put in place an "effective educational platform" to "fundamentally rethink the manner in which we present ethical education".

The story was updated to report on Noyori's internal email of 2 April.

The story was updated with more details on the announcement and its reverberations, and with a comment from Nature's research editorial team.