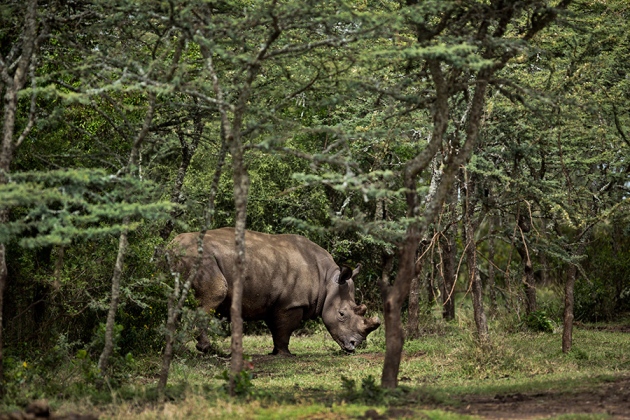 Fatu is one of three remaining northern white rhinos, all of which live in Kenya’s Ol Pejeta Conservancy.

The northern white rhinoceros is a species waiting for extinction. Its three remaining individuals, kept in a well-guarded Kenyan conservation park, cannot breed naturally. A 15-year-old female named Fatu could be the last of a creature that once roamed central African savannahs by the thousands.

In a last-gasp effort to avert that scenario, researchers this week unveiled the details of an audacious plan to save the northern white rhino (Ceratotherium simum cottoni), by transforming cells from living rhinos and from frozen storage into sperm and egg cells, and then using in vitro fertilization (IVF) to create embryos and revitalize the population. Teams led by San Diego Zoo Global in California and the Leibniz Institute for Zoo and Wildlife Research in Berlin have already started work on the idea.They say that it could guide the rescue of other animals that are on the brink of extinction, and even the resurrection of those already gone. But critics call the plan, which is likely to require millions of dollars, fanciful and worry that it could distract from broader conservation efforts.

“The northern white rhinoceros will go extinct if we don’t do this,” says Oliver Ryder, a conservation geneticist at San Diego Zoo Global and a leading architect of the rescue plan, published on 3 May in Zoo Biology (J. Saragusty et al. Zoo Biol. http://dx.doi.org/10.1002/zoo.21284; 2016). The strategy was drawn up last December in Vienna at a meeting that was attended by teams from both zoos, as well as specialists in stem-cell and reproductive biology. “It’s really a strategic road map — one which has a lot of obstacles,” says reproductive biologist Thomas Hildebrandt, who leads the Leibniz team. 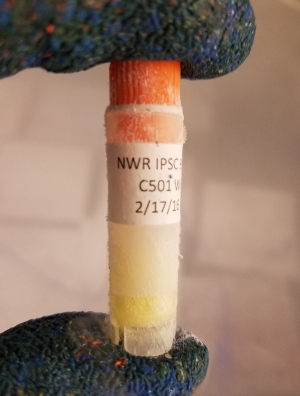 A vial of reprogrammed stem cells from a northern white rhino.

Poaching has slashed the rhinos’ numbers from around 2,300 in the 1960s. For the remaining three animals, natural reproduction is not an option. Sudan, a 42-year-old male, has a low sperm count; his 26-year-old daughter Najin has leg injuries that mean she cannot bear the weight either of a mounting male or of pregnancy; and her daughter Fatu has a uterine disorder that would prevent an embryo from implanting. But sperm and other cells from another ten individuals are in frozen storage.

To begin with, researchers will try to create embryos from existing sperm and egg cells; Hildebrandt says that this year he will go to the Ol Pejeta Conservancy, where the animals live, to collect egg cells from Fatu and Najin. These could then be fertilized with some frozen sperm and implanted into a surrogate mother, a southern white rhino (Ceratotherium simum simum).

But no one has ever made a viable rhino embryo using IVF, let alone implanted one into a surrogate, so the San Diego and Leibniz teams are each working to develop the technique in southern white rhinos, which number around 20,000. Hildebrandt is confident that obstacles such as implanting an embryo in a surrogate will be overcome in a matter of years. “Najin or Fatu will see another northern white rhino before they die. That I can guarantee,” he says.

Najin and Fatu are currently the only source of egg cells for use in IVF. That limited gene pool means that it will not be possible to create a northern white rhino population that is sufficiently diverse to thrive in the wild. So in stage two, the researchers would try to reprogram frozen rhino cells into stem cells that have the capacity to develop into any type of tissue, including eggs and sperm (see ‘Saving the northern white rhino’). In 2011, a team led by stem-cell scientist Jeanne Loring at the Scripps Research Institute in La Jolla, California, created such cells, known as induced pluripotent stem (iPS) cells from Fatu’s skin cells (I. F. Ben-Nun et al. Nature Meth. 8, 829–831; 2011). But generating sperm and eggs from iPS cells will not be simple, and could require rhino stem cells to be cultured alongside the reproductive tissue of other animals, such as mice. “All the technologies have been done but in other species,” says Loring. “It’s not certain these things are going to translate directly to rhinos.”

Conservationists have tried to bring species back from the brink using reproductive technologies before. In the 2000s, for instance, researchers attempted to use cloning to resurrect the Pyrenean ibex (Capra pyrenaica) and a species of wild ox (Bos gaurus). The cell reprogramming elements of the rhino plan are even more ambitious. “I don’t see any technical deal-breakers,” says George Church, a genome scientist at Harvard Medical School in Boston, Massachusetts. He hopes to use some of the same approaches to resurrect woolly mammoths, or at least engineer Asian elephants that can flourish in the Siberian steppe.

Funding could prove the greatest barrier. San Diego Zoo has raised around US$2 million for the project since its last northern white rhino, Nola, died last year; it declined to give an estimate of the project’s total cost. Hildebrandt says that his team has had much less luck raising funds — and would need several million dollars to create a rhino through IVF.

Ryder says that the significant costs of rescuing and protecting northern white rhinos will be worth it — not only to save the species, but also to demonstrate what conservationists can do to rescue other animals. That precedent is what most worries Stuart Pimm, a conservation biologist at Duke University in Durham, North Carolina. “This says we can let species go to the very brink of extinction and modern technology can bring them back,” he says. “There is a very substantial moral hazard in that.”

“It’s Star Trek-type science,” says Michael Knight, chair of the International Union for Conservation of Nature’s African Rhino Specialist Group. He worries that the effort could take away money from other rhino conservation efforts — including those directed at southern white rhinos, whose numbers are swelling thanks to good management, Knight says. “They should not be pushing this idea that they’re saving a species. If you want to save a [rhino] species, put your money into southern white conservation.”