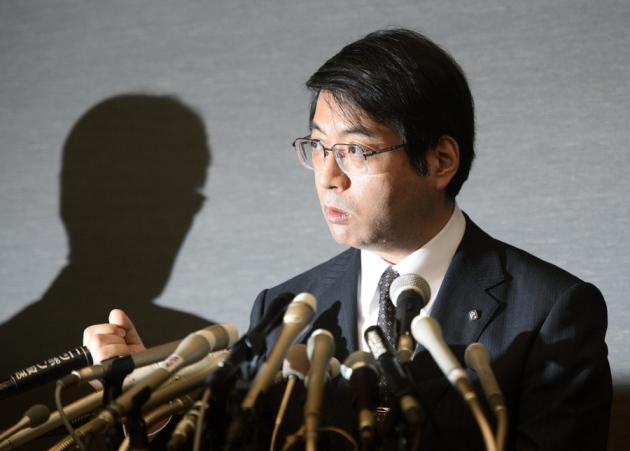 Yoshiki Sasai at a news conference in Tokyo on 16 April.

A note left by a Japanese stem-cell researcher before he took his own life blames the storm of media attention around the retraction of two papers for his suicide, a lawyer working for his family said in a press conference.

In the days following the tragic death of Yoshiki Sasai on 5 August, scientists, journalists and bloggers in Japan have been speculating about the reasons behind it. Sasai, a 52-year-old world-renowned stem-cell scientist at the RIKEN Center for Developmental Biology (CDB) in Kobe, Japan, had been entangled in a controversy over the past six months surrounding two stem-cell papers that he co-authored. The papers1, 2 were published in Nature in January, but then retracted in July.

At a press conference on 12 August, Kazuhiro Nakamura, a lawyer representing Sasai’s family, summarized the contents of the suicide note left by Sasai to his family. In it, Sasai that said he was “worn out by the unjust bashing in the mass media and the responsibility he felt towards RIKEN and his laboratory”, according to Nakamura. The lawyer would not release a full version of the note, citing Sasai’s wishes and concern for the family.

The two Nature papers described a method for converting mature mouse cells to an embryonic-like state by subjecting them to stress — for example, by immersing them in acid — a method known as stimulus-triggered acquisition of pluripotency, or STAP. Duplicated and manipulated images were soon found in the papers. A RIKEN internal investigation committee found Haruko Obokata, the lead author of the papers, guilty of scientific misconduct in April (see Nature's special collection 'The rise and fall of STAP').

The internal committee found Sasai to hold “grave responsibility” for failure of oversight, but concluded that he was innocent of any direct involvement with the problematic data.

But in the months after publication, Sasai was hammered in the Japanese media, with people reflecting on his responsibility for the papers and delving into his personal life. Many articles in the press made unsubstantiated claims about his motivations, including one article in the 17 April issue of Shukan Bunshun that tied Sasai’s involvement with the STAP research to a heartbreak he experienced at university.

Tabloids were not the only outlets making such unsupported claims about Sasai. In June, an independent RIKEN reform committee, tasked with preventing future misconduct, released a report that criticized the CDB leaders, especially director Masatoshi Takeichi and Sasai, the deputy director, for being so motivated by the desire to eclipse the technology of induced pluripotent stem (iPS) cells — pioneered by another Japanese team in 2006 — that they skipped standard recruitment procedures when hiring Obokata.

The report also accused Sasai of orchestrating a media blitz that included making Obokata wear an apron given to her by her grandmother to a press conference. It also “surmised” that Sasai was motivated by the lure of grants in pursuing STAP.

Takeichi and Sasai objected to these points among numerous others in the report. The committee did not interview Sasai — nor anyone else at the CDB aside from Takeichi — before reaching conclusions about the motivations that drove Sasai. The report itself lacked an explanation for most of the accusations. Nonetheless, it recommended that the CDB be dismantled.

In June, in response to queries from a Nature reporter (Nature’s news team is editorially independent of its research editorial team) to various committee members, Masaki Nakamura of Osaka University forwarded a note from “the RIKEN reform committee”, of which he is a member, stating that the panel would not respond to requests in an attempt to “avoid any unnecessary confusions and/or misunderstanding”. The message also said that the committee had disbanded and thus no one could comment.

Teruo Kishi, an emeritus professor at the University of Tokyo who led the reform committee, has, however, commented elsewhere in the Japanese press. In the wake of the suicide, Kishi said that Sasai’s death could have been avoided if RIKEN had acted more quickly on the committee's recommendations. “The key thing is speed,” he said. “By waiting, criticism in the mass media increases, and it has the opposite effect.”

According to Kazuhiro Nakamura’s summary of the underlying factors that led to the suicide, it was the committee’s recommendation to dismantle the CDB in June, not RIKEN’s slowness in doing so, that “gave Sasai a tremendous shock”.

Kishi says that he hopes that “the dismantlement of the CDB, through an even greater reform than the one recommended by the reform committee, would catapult RIKEN to a world-leading position”.

Developmental and stem-cell biologists think the CDB already occupies that position, leading to a flood of international support for the CDB since June. Maria Leptin, a molecular biologist and director of the European Molecular Biology Organization in Heidelberg, Germany, said at the time that the committee’s proposals for the CDB “may even be more damaging than the incident itself”.

While RIKEN continues to deliberate the CDB’s fate, many are still trying to come to grips with Sasai’s death — his family more than anyone. At the 12 August press conference, Kazuhiro Nakamura also released a statement from Sasai’s family: “We feel crushed by a deep sorrow. This last six months have been too long, and we too are worn out. We see nothing but despair.” The statement goes on to wish the CDB members all the best in returning to an environment in which they can do research. It ends with a plea for their privacy to be respected.

This story has been updated to make clear that it was Masaki Nakamura of Osaka University who forwarded a note from the RIKEN reform committee, not Kazuhiro Nakamura, as was previously implied.