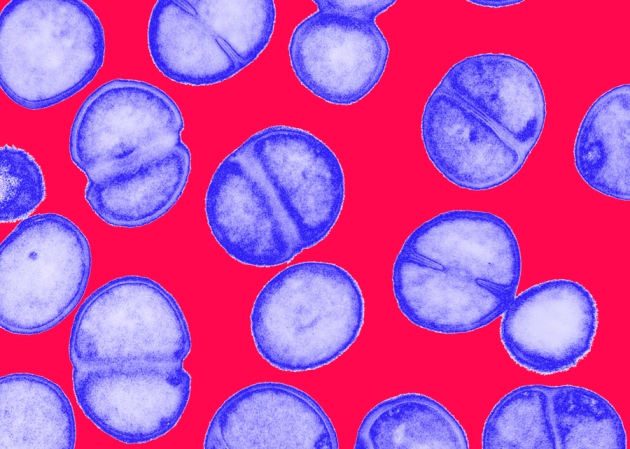 A targeted antibiotic can eliminate infections caused by microbes that are resistant to most drugs, experiments in mouse cells suggest.

A team at biotechnology company Genentech in South San Francisco, California, borrowed a concept used in cancer treatment, in which an antibody — a protein designed to attach to particular cells — is connected to a cancer-fighting drug. Such 'antibody–drug conjugates' include Genentech’s Kadcyla (trastuzumab emtansine), which docks onto breast-cancer cells before deploying its cancer-killing payload.

Dramatic rise seen in antibiotic use

Sanjeev Mariathasan, an immunologist at Genentech, and a large team of co-workers adapted this strategy — which they tested in mouse cells — by gluing an antibody against Staphylococcus aureus (Staph) bacteria to an antibiotic, a modified version of the drug rifampin, which is used to treat tuberculosis. More than 80,000 people in the United States are infected each year with methicillin-resistant S. aureus (MRSA), which is untreatable with most commonly used antibiotics, and more than 11,000 people of them die. MRSA is thought to be so deadly in part because after Staph invades the body, it quickly enters cells, where it becomes hard to kill with antibiotics.

“Most conventional antibiotics are fantastic at killing Staph outside cells, but poor at killing it inside the cell,” says Mariathasan. “So the question was how do you kill the bacteria when it gets inside the cell?”

His team found that its antibody–antibiotic combination drug was highly effective at doing this. The team infected mice with MRSA, then treated them with a control drug, vancomycin — most often used to treat internal MRSA infections — or with its experimental combination drug. The experimental drug was approximately a thousand times more effective against MRSA than was vancomycin, the team reports in Nature1.

The work “suggests a new approach to eliminate subpopulations of bacteria that are protected by virtue of location or physiological state”, says physician Henry Chambers at the University of California, San Francisco. He adds that there is a long way to go before proving that the drug helps people with Staph infections, but if it does it could be an important new weapon against bacterial infections: “It could change treatment if it can be demonstrated to improve outcomes as well,” says Chambers.

Mariathasan says that the treatment works like a stealth bomb. First, the antibiotic component docks onto Staph bacteria that are floating freely in the mouse's body. Then, the bacteria invade cells, carrying the therapy with them. Once inside, enzymes break the connection between the antibody and the antibiotic, activating the antibiotic precisely where it is needed to kill the bacteria.

However, William Nauseef, a physician–scientist at the University of Iowa in Coralville, notes that Staph mainly infects a different type of immune cell in mice than it does in humans. And writing in an accompanying News & Views article in Nature, microbiologist Wolf-Dietrich Hardt of the Swiss Federal Institute of Technology in Zurich points out that people with chronic Staph infections already have antibodies to the bacteria, which may block the combination therapy from binding to the bacteria.

If the experimental drug is works in humans, it also could help drug companies and researchers to find new uses for old drugs. Many experimental antibiotics fail in trials because they are toxic at the doses needed to produce a therapeutic effect, or because they do not work when they are given through pills, intravenous lines or injections that do not deliver the drug directly into cells. In principle, targeted antibiotics could be given at lower doses because they reach precisely the cells in which they are needed, and thus might be less likely to cause side effects.

“To me the most exciting perspective is the ability to tap this large resource of antimicrobial drugs that have not survived the pipeline,” says Hardt. That is especially important, he adds, because even as antibiotics are rendered less useful with the spread of drug resistance, companies are generally not as interested in developing new antibiotics as they are in making other types of drugs — for instance, expensive cancer treatments.

Furthermore, “new classes of antibiotics tend to be put into the drawer”, to prevent them becoming overused, Hardt says. “Antibody conjugates could help us revisit drugs and thereby help to fill the empty pipeline.”