Plans to cut numbers of scientists and reduce or discontinue some measurements at a world-class atmospheric-research centre in New Zealand have prompted a barrage of international concern. The cuts will effectively spell the end of a uniquely valuable site for observing the global atmosphere, critics warn.

The 51-year-old Lauder Atmospheric Research Station on New Zealand's South Island specializes in measuring levels of chlorofluorocarbons (CFCs), ultraviolet light and greenhouse gases, and has had a key role in assessing the state of the ozone layer. It is well known among atmospheric scientists for its large range of instruments — many internationally funded — and its location under clear skies that make it perfect for observations. The station's data are used to calibrate satellite measurements of the atmosphere. 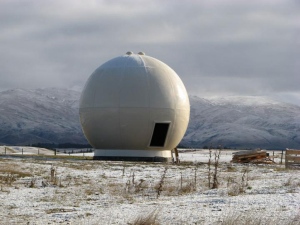 Lauder Atmospheric Research Station in New Zealand collects data for global networks — but work looks set to be scaled back.

But last week, New Zealand's National Institute of Water and Atmospheric Research (NIWA), the government-owned company that administers the lab, told Lauder staff that it planned to axe all three of the site's atmospheric-scientist positions. The cuts, which follow a reprioritization of activities by NIWA, would seem to leave Lauder's extensive measurement operations in the hands of five technicians. Two climate modellers and a mathematician are also understood to remain.

No other mid-latitude site in the Southern Hemisphere has such a long-running and extensive range of measurements. Lauder is integral to several internationally run observation networks, including the Network for the Detection of Atmospheric Composition Change (NDACC) and the United Nations-sponsored Global Climate Observing System (GCOS), which make major contributions to the worldwide atmospheric research effort.

Representatives of both groups have written to New Zealand ministers and NIWA to express their concern. “These changes will leave the station with no measurement scientists, and essentially destroy Lauder as a critical Southern Hemisphere measurement site,” said current and former co-chairs of the NDACC steering committee, in a letter sent this week.

A working group aiming to establish a GCOS Reference Upper-Air Network (GRUAN) wrote last week, saying, “It is questionable whether the facility will be able to continue to meet GRUAN requirements.” Susan Solomon, an atmospheric chemist at the Massachusetts Institute of Technology in Cambridge, is coordinating a more general letter from concerned researchers.

“The decision effectively spells the death knell for the site as we know it,” says Peter Thorne, co-chairman of the GRUAN working group and a climate scientist at the Cooperative Institute for Climate and Satellites at North Carolina State University in Asheville. “I don't believe you can run a world-class measurement facility with just technicians.”

Michael Kurylo, a former co-chair of NDACC's steering committee and a retired atmospheric scientist at NASA, agrees that to keep measurements “really high quality” requires the involvement of highly trained scientists. “For all practical purposes, with respect to state-of-the-art measurements, Lauder is closing,” he says.

Members of the International Ozone Commission (IO3C) wrote to ministers this week. The recurring hole in the ozone layer over Antarctica needs to be monitored, they said, adding that ozone measurements are also “crucial” for studying the interplay between ozone depletion and climate change. The commission labels the plans “incomprehensible” and says that they will damage both ozone research and New Zealand science.

Geoff Baird, a spokesman for NIWA, says that the institute will review feedback before implementing its final decision in September. He adds that Lauder will continue to collect measurements for New Zealand's international and national priorities. “No international commitments will be affected by this proposed change,” says Baird. He notes that "key stakeholders" support the reduced emphasis on ozone and ultraviolet-light measurements, “given the state of the knowledge base and the need to concentrate on other aspects of upper-atmosphere work”.