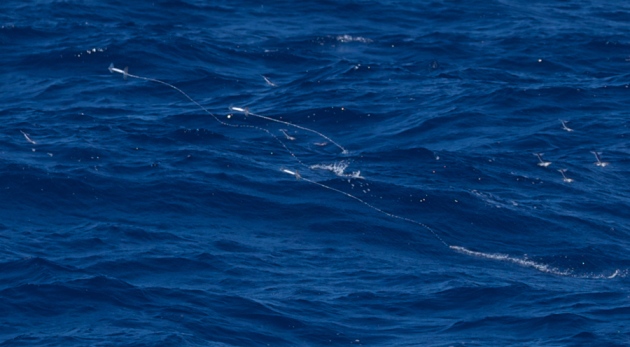 These flying squid may find it easier to to travel through the air than the water.

Squid can save energy by flying rather than swimming, according to calculations based on high-speed photography.

The creatures are rarely seen flying, so some researchers argue that the mode of travel is not widespread in migration, but over years of study O’Dor has gathered hints that the behaviour is more common than was thought. Since the 1970s, he has been keeping Northern shortfin squid, Illex illecebrosus, in a 15-metre indoor pool. At first, his research team would often find dead squid around the pool in the morning, the creatures having jumped out of the water over night. “It was clear that if two or three died every night we were going to run out of animals fairly quickly,” says O’Dor. The team ultimately lowered the water level to keep the squid in.

Further evidence came from Julia Stewart, a marine biologist at Hopkins Marine Station of Stanford University in Pacific Grove, California, who uses tagging to track Humboldt squid (Dosidicus gigas). Her recent work found that they travelled faster than anyone had seen before. “The question this raised in my mind was, ‘Maybe they really are flying?’” says O’Dor.

Up in the air

In research that Stewart will present2 today at the American Geophysical Union’s Ocean Sciences Meeting in Salt Lake City, Utah, O’Dor, Stewart and others studied a set of photographs taken by amateur photographer Bob Hulse in 2009 off the coast of Brazil. Hulse shot rapid-succession pictures of what the researchers believe were orange-back squid (Sthenoteuthis pteropus), a small cephalopod with a body length (excluding arms and tentacles) of around 6 centimetres, leaping out of the water.

Because they knew the intervals of time between each photo, O’Dor and his colleagues were able to estimate the squid’s velocity and acceleration, and compare them with these values for squid in water. They found that the velocity in air while the squid were propelling themselves with the water jet was five times faster than than any measurements O’Dor had made for comparable squid species in water.

“It makes perfect sense that these species are using flight as a way of saving energy,” says O’Dor. Some species spend vast amounts of energy migrating each year; for example, I. illecebrosus travels more than 1,000 kilometres down the North American coast to spawn.

“I could never explain how they could get this much energy”, even given evidence that females eat the males as they make the journey, says O’Dor. “As soon as we thought about the possibility that these things flew, it became plausible that these animals actually use flight as a way of reducing energy cost.”

But Richard Young, a retired oceanographer at the University of Hawaii in Honolulu who sent the photos to O’Dor, and who collected a specimen of a closely related species that O’Dor’s team used to estimate the size of S. pteropus, thinks it is more probable that the squid fly to avoid predators. “If it were a likely possibility, you'd see squid popping out of the water and popping out of the water again. It’s very rare to see them fly at all. As far as I know nobody has ever seen them doing it in a sequence,” he says.

Yet Young agrees that the findings are surprising and exciting. “It’s the first time we’ve ever had any information comparing flight in air with flight in water.”

O’Dor proposes to estimate what proportion of time squid spend above water by fitting the creatures with tags that measure acceleration. From there, his team could move on to investigate the gliding part of the squid’s flight, not just the rocketing, he says.