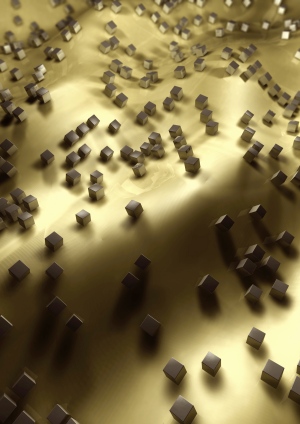 Scattering silver nanocubes over a metallic film may help harvest the sun's rays.

Just sprinkle on and harvest light — that is the procedure with nanoscale cubes of silver that could be used to make efficient solar panels, heat detectors and specialist cameras.

The cubes are scattered randomly on a piece of polymer-coated metal to form a device that absorbs nearly all the light that hits it. Unlike other light absorbers, it is relatively simple and cheap to make, and could be produced on a large scale for industrial and even domestic applications.

The material, which can be tuned to ensnare the desired wavelength of light, is described today in Nature1. It was developed by David Smith, a materials scientist at Duke University in Durham, North Carolina, and his colleagues.

Trapped in a gap

Absorbers that can capture all, or almost all, of the light that hits them are typically made with metamaterials — materials engineered to have particular properties not found in nature. They usually have precisely placed components smaller than the wavelength of light, which gives them the ability to manipulate light in weird ways (see 'Ideal focus').

These minuscule components are painstakingly fabricated in a laborious, expensive etching process using lithography, so the light absorbers are difficult to make in large quantities.

Smith and his team took a different approach. They mounted a thin piece of gold on a piece of glass, and dipped it into two organic chemicals to build a uniform polymer layer just a few nanometres thick on top of the gold. They then made silver cubes about 74 nanometres wide, and scattered them on top of the polymer.

When light with a certain wavelength hits a nanocube in the device, it excites the cube’s electrons, which start to oscillate together with the electrons in the gold film. This 'plasmon resonance' between film and nanocube seems to pull light into the insulating polymer gap between them, and traps it there, explains Smith.

The thickness of the polymer is crucial — it determines the wavelength of light that is gathered. Different polymer thicknesses in an array of combined devices could absorb between them a broad range of light wavelengths.

Smith says that his device works just as well as etched systems, and is easier to make.

“It’s time consuming to make a very large structure” using lithography, agrees Min Qiu, who works on similar systems at the Royal Institute of Technology in Kista, Sweden. A square of etched light absorber 100 micrometres across takes up to an hour to prepare, he says, and a patch 1 millimetre across would take up to 100 times longer.

Smith’s system is potentially easier to prepare on large scales, says Qiu. However, before it can be used practically, the team must find a way to make all the nanocubes the same size; they currently vary slightly.

Smith is also looking at using different materials to form the insulating gap, because organic polymers might not be suitable for high-temperature applications, he says.

The method could help to make metamaterials much more practical, says Junpeng Guo, who works on nanophotonics at the University of Alabama in Huntsville. “This brings the technology to ordinary people’s lives,” he says. For example, the nanocube absorber could be used to make solar-powered rooftop water heaters more efficient.