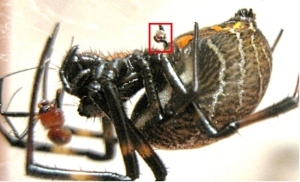 The one who didn't get away. A male Nephilengys malabarensis snapped off his genitals (red box) in the female, but was eaten anyway.

If your partner is likely to devour you after sex, snapping off your genitals inside her and running away might seem a reasonable reproductive strategy. This game plan is used by males of the orb-web spider Nephilengys malabarensis and, it turns out, continues to work in their favour regardless of whether they survive the encounter.

Daiqin Li at the National University of Singapore and his colleagues studied the species and found that after the male breaks away his severed organ continues to pump sperm into the female. This allows him to fertilize her remotely, while denying entry to other males. Even though the male cannot regrow his genitals and so renders himself sterile, he increases the odds that he will father the offspring of his one and only mate. The study is published today in Biology Letters1.

Male spiders deliver their sperm through a pair of structures known as palps, which are found on the sides of their heads. By observing sexual encounters between 25 pairs of virgin N. malabarensis, Li's group found that every coupling ended with damage to the male’s palp. In 12% of cases it was partially severed; in the rest it snapped off completely.

Li thinks that this bizarre strategy, found in only two spider families so far, evolved to counter the female’s penchant for cannibalism. “The females are very aggressive and 75% of them kill the males during sex,” he explains. “The duration of copulation is also very short, and the females initiate the break-off.”

By dissecting the mated spiders, Li and his co-workers found that the palp has dispensed only about one-third of its sperm by the time the female pushes the male off. But it continues to transfer sperm after it breaks off, and does so at a faster rate.

“It is quite remarkable,” says Jutta Schneider, who studies sexual interactions in spiders at the University of Hamburg in Germany. “It supports our notion that male spiders of some species are under selection to prolong copulation against the actions of the female.”

Breaking off their palps could confer other benefits on the males. In previous work, Li and colleagues found that the detached palp prevents other males from mating with the female. The eunuchs also become better fighters2. The few males that are not cannibalized remain on the female’s web and guard her aggressively.

They tend to win fights, even against larger opponents, possibly because they are more agile without their heavy palps. Alternatively, it could be that they are highly motivated to protect their one shot at paternity. “He may be busily defending the female from rival males while his sperm is being transferred to his female mate, perhaps even against her evolutionary interest,” says Mark Elgar, an animal behaviourist at the University of Melbourne in Australia.

Elgar wants to know whether females have any counter-adaptations to the male’s strategy. “Does she try to remove the palp of non-preferred males” after they have snapped off in her, for example?

Meanwhile, Matthias Foellmer, a spider specialist at Adelphi University in New York, says that the next step should be a study of the species’ ecology, including their population sizes, and how often males die while looking for mates. With that information, he says, “the benefits of self-emasculation can be compared with the true costs. These may be low if, for example, the probability of finding additional females is low”.