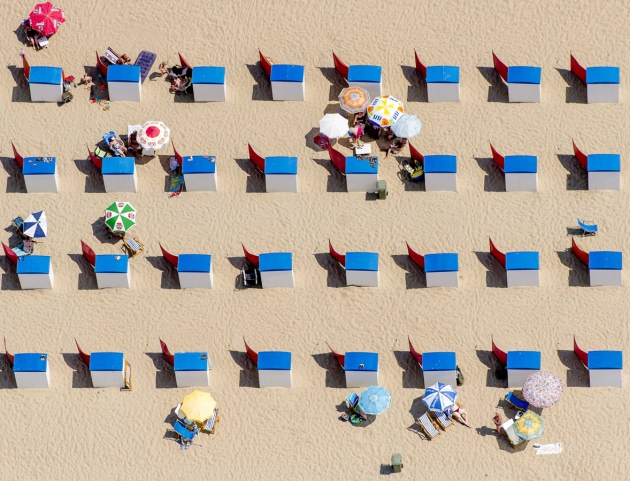 Sunbathers in Utrecht, the Netherlands, on 1 July, in a Europe-wide heatwave of the sort that climate change has made more probable.

Over much of Europe, the sweltering heatwave of late June and early July has barely subsided. But already, scientists have analysed the possible role of climate change, concluding that global warming made such an event at least twice as likely over much of the continent. In some cities, climate change has made comparable heatwaves four times more likely, they say.

The speedy study comes from a collaboration involving the US-based nonprofit environmental news organization Climate Central and an international team of climate researchers. They posted results on 2 July based on the sweltering temperatures forecasted, and updated their work on 10 July using the previous week’s actual temperatures, with similar conclusions. The work, which has not yet been peer-reviewed, may be the first real-time example of “weather attribution” — assessing the impact of climate change on extreme weather events. 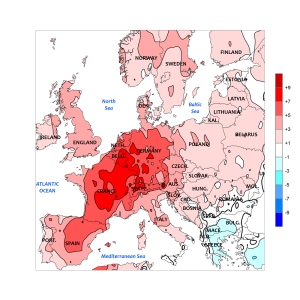 Temperatures in Europe at the beginning of July soared many degrees above historical averages.

Its practitioners hope that it will inject scientific rigour into media coverage of such events as they occur. “There’s just often a lot of unscientific speculation going on about the role of climate change,” says Heidi Cullen, Climate Central’s chief scientist. “Our goal was to provide quantitative answers in this more timely manner when the question was being asked.”

It is common practice and relatively straightforward to estimate how climate change affects the likelihood of extreme heat, rain, or snow by comparing current records to pre-warming weather archives from a century ago. A more involved method is to run climate models that incorporate a warming climate, and then compare the chances of the event happening to results from the same models with the warming turned off.

The problem, says Cullen, is that peer-reviewed studies turn up in the literature too late to affect media discussions about climate’s role in a particular extreme weather event. She thinks that the effort to make a real-time attribution study has already paid dividends in media coverage. Cullen adds that the results will also help relief agencies such as the Red Cross and the Red Crescent, whose joint climate centre was also involved in the project. Invoking real-time attribution figures allows them to help local authorities to prepare better for future events — and also to draw attention to extreme weather events and boost fundraising.

But the communication of attribution can still be murky, says Andrew Solow, an environmental statistician at the Woods Hole Oceanographic Institution in Massachusetts, who argues that the media has exaggerated the extent to which any single event can be attributed to climate change. In the case of the European heatwave, Solow says that he was put off by the way Climate Central communicated their report, which stated that it was “virtually certain that the heatwave … was more likely to happen now than in the past due to climate change”. In Solow’s view, this conveys too much certainty that the event was caused by climate change — which is not correct.

Nevertheless, Solow agrees that attribution techniques are on the cusp of becoming routine. Friederike Otto of the University of Oxford, UK, the lead climate modeller on the team, thinks that within ten years, attribution methods will graduate from peer review and become an operational product, much like local weather forecasts are today.

Cullen adds that it is now possible in some cases — even if not for the European heatwave — to use attribution studies to pin extreme weather events on climate change.  For example, in 2014, a series of five studies of the record-breaking 2013 Australian summer all concluded that climate change had made the heatwave much more likely, with one modelling study finding it “virtually impossible” to simulate without global warming — a de facto conviction of climate change’s role.