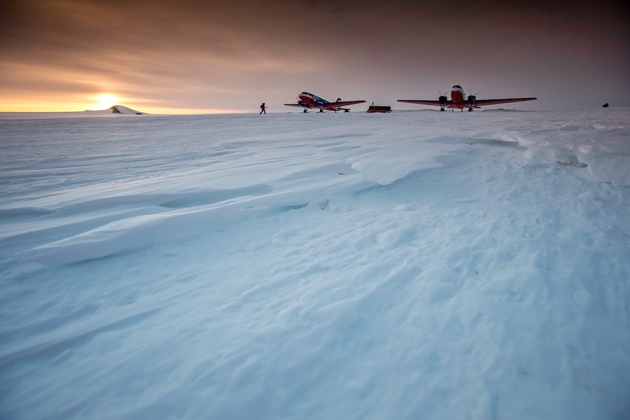 Antarctica’s Queen Maud Land is a promising site for drilling an ice core that goes back 1.5 million years.

As the short Antarctic spring ends and long summer days approach, geo­scientists are flocking to the frozen continent to start a new kind of exploration.

In December, the first drill designed to search for a scientifically useful sample of ice that is at least 1.5 million years old will begin its work. It is part of a broader effort to locate the best place to extract a core containing Earth’s oldest ice, which would help to reveal how climate has shaped the planet’s past and how to predict future fluctuations.

“This exciting field season should bring us a large step nearer to deciding where to drill the oldest-ice core,” says Olaf Eisen, a glaciologist at the Alfred Wegener Institute of Polar and Marine Research in Bremerhaven, Germany, who coordinates an exploration team funded by the European Union.

More than a decade ago, the European Project for Ice Coring in Antarctica (EPICA) drilled the oldest existing core, which contains 800,000-year-old ice, from an ice dome in East Antarctica known as Dome C. The core reaches only as far back as the latter part of the Pleistocene epoch, when Earth began cycling between warm and cold periods every 100,000 years. Before 1 million years ago, the cycle occurred every 40,000 years (L. E. Lisiecki and M. E. Raymo Paleoceanography 20, PA1003; 2005), so scientists want an ice core that is twice as old as EPICA to better understand this transition.

Digging such a core would cost about US$50 million and take several years, so researchers want to be sure that the location is optimal — with ice that is sufficiently deep but not melted at the bottom by geothermal activity. “It’s absolutely crucial to thoroughly investigate all options,” says Eisen. Enter a new breed of drill, designed to do fast, cheap reconnaissance instead of extracting a single, intact ice core, as previous deep drills have done.

One promising location, ‘little Dome C’, lies just 40 kilometres away from the EPICA site — and is where the £500,000 (US$620,000) Rapid Access Isotope Drill (RAID) will start boring this month, led by climate scientist Robert Mulvaney of the British Antarctic Survey in Cambridge, UK. A narrow drill, RAID will excavate to 600 metres in about 7 days — compared with 5 years for a 3.4-kilometre core such as EPICA’s. And rather than extract a core, RAID will measure the ice’s temperature and collect chips of ice. Scientists will then comb these for clues from isotopes as to the age and temperature of the ice at the bottom of the sheet.

“You cannot trust a single core.”

A more expensive reconnaissance instrument, which will do its first drilling tests this season at Dome C, should be ready to take a deeper look next year. Led by glaciologist Jérôme Chappellaz of Joseph Fourier University in Grenoble, France, the €3.2-million (US$3.4-million) SUBGLACIOR probe, which is about the same width as RAID, can penetrate the more than 3-kilometre-thick ice sheet in a single season.

Both the UK and French drilling projects are funded as part of the EU collaboration. But also this season, a US team led by climatologist Jeffrey Severinghaus of the Scripps Institution of Oceanography in La Jolla, California, and John Goodge of the University of Minnesota, Duluth, will test the $10.5-million Rapid Access Ice Drill (also abbreviated RAID) at Minna Bluff, near the US McMurdo Station on Ross Island. Producing a hole of about 8 centimetres — similar to the boreholes of the other drills — it is the only rapid drill that can extract rocks from the bottom of a core. Next Antarctic summer, the team will begin its hunt for the site of a 1.5-million-year-old core.

Dome C is one option for its first excavation. Another is the relatively unexplored Dome F in Antarctica’s Queen Maud Land, which ground-based radar suggests is a promising candidate (see ‘Ice search’). In January, a German team will run reconnaissance flights there. Funded by the same European grant as the UK RAID and SUBGLACIOR drills, this radar survey will give a more comprehensive view of the ice thickness. Severinghaus says that his team will watch for the data when deciding where to point the US RAID. 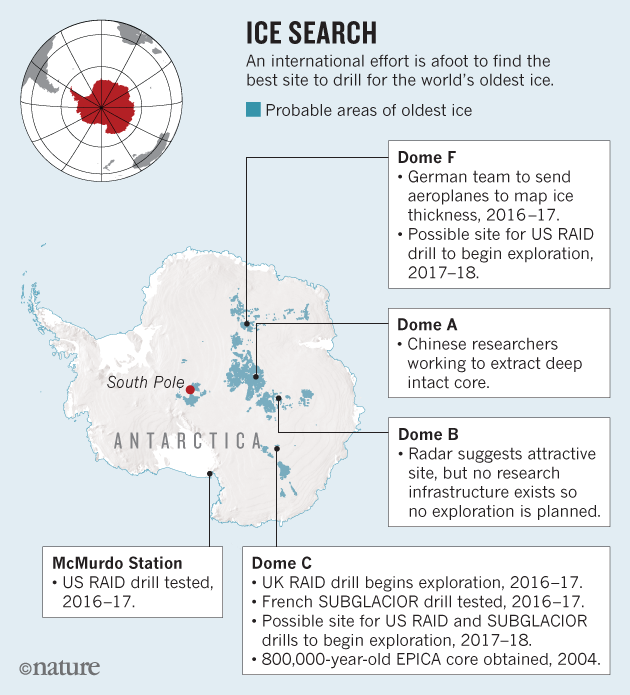 Both the US and European teams are working under an umbrella group. The International Partnerships in Ice Core Sciences (IPICS) aims to identify a suitable site to drill a core representing Antarctica’s oldest ice in the next two years. That drilling could start by the end of 2020, says Eisen. But how the international teams would work together on a joint project, or share funding, is unclear.

There’s a possibility that a record-breaking ancient core could show up sooner. For several years, scientists at the Polar Research Institute of China in Shanghai, who are also members of IPICS, have been probing the ice sheet that covers Dome A, a plateau close to the centre of the Antarctic continent. Using a conventional corer rather than a rapid exploratory drill, they are working on obtaining a deep, intact ice core from the region, says Eisen — and it is possible that it could stretch back to 1.5 million years. Such a surprise success would increase pressure on teams from other nations to produce their own record, he says.

Multiple cores would benefit science. “We would carry on with our project,” says Eisen. The IPICS effort would ideally excavate multiple 1.5-million-year-old cores in any case. “You cannot trust a single core,” says Severinghaus. “We absolutely need different records from different thermal regimes.”

This story gave the wrong size for the borehole to be drilled by the US RAID. It will be about 8 cm, not 50 cm, and so roughly the same size as the other planned holes. The story should also have noted that as well as Jeffrey Severinghaus, the US project is co-led by John Goodge of the University of Minnesota, Duluth. The text has been updated.