The cheetah crouches in the undergrowth. When a young antelope strays a little too far from the herd, the cheetah explodes out of the bush — and, with a burst of speed unrivalled in the natural world, brings down its next meal.

Or so we have assumed. But the first study to collect data on the animal’s movements in the wild reveals that, contrary to popular opinion, a cheetah’s sheer speed is not its only weapon when it comes to hunting. Its success as a predator also hinges on its lightning reflexes and its ability to accelerate faster than a Ferrari.

Determining just how fast animals run is no easy task. In zoos, captive cheetahs lured to run in a straight line can attain speeds of up to 29 metres per second — nearly 105 kilometres per hour (N. C. C. Sharp J. Zool. 241, 493–494; 1997), more than double the top speed achieved by a human sprinter. But nobody had been able to determine whether the animals actually reach these speeds in the wild.

The team first tested the accuracy of their collars on a dog by letting the animal loose on a beach; that way, the information collected could be cross-referenced with the paw prints left in the sand. The collars proved to be astonishingly precise, down to a level of 0.2 metres.

The researchers then travelled to the Okavango Delta region of northern Botswana, where they used darts to sedate and collar five cheetahs. The 17 months spent collecting the data was the easy bit; what posed the challenge was making sense of the data, which confounded expectations. 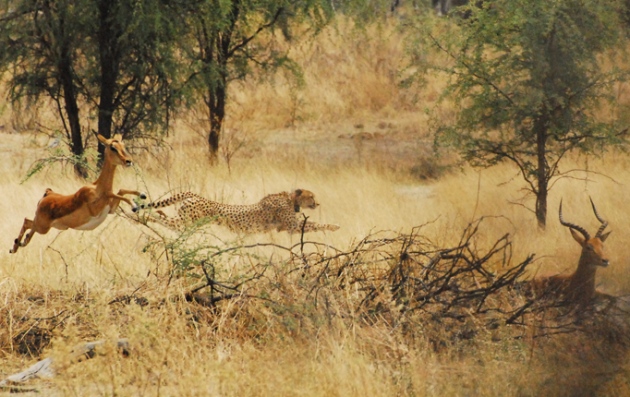 Cheetahs can hunt successfully in open environments and in dense vegetation.

Out of a total of 367 runs, the fastest speeds achieved by the five individuals were 25.9, 25.4, 22.0, 21.1 and 20.1 metres per second — all well short of the record set by captive cheetahs. Moreover, most hunts involved only moderate speeds, with the average top speed coming in at 14.9 metres per second. But although the wild cheetahs did not run as fast as their captive kin, they demonstrated other athletic abilities that researchers had not been able to measure before.

The data revealed the cheetahs’ acceleration powers to be up to 120 watts per kilogram — about double the power of the swiftest greyhounds and more than four times that of Usain Bolt during his record-breaking 100-metre sprint in 2009. The cheetahs were also able to slow down rapidly, absorbing energy at a rate up to three times greater than that known for the best-performing polo horses — animals that are bred to be agile.

When the researchers combined this information with field observations of cheetah kills and terrain information provided by Google Earth, they realized that the cheetahs were often hunting successfully amid thick vegetation by making sharp turns and sudden stops. “We have always thought of cheetahs as sprinters, but now it looks as though sprinting is only part of the story,” says Wilson.

“It is remarkable,” says evolutionary biologist David Carrier at the University of Utah. “Both agility and manoeuvrability turn out to be at least as important to these animals as speed.”

Anticipation of what Wilson’s collars might reveal in the future is growing fast. “I really wonder if cheetahs living on the open savannahs will yield the same sorts of results,” says Jack Grisham, coordinator of the cheetah species survival plan for the Association of Zoos and Aquariums.

Carrier, meanwhile, hopes the collars will soon be used to study the movements of other animals in the wild. “Simultaneous recordings from each member of a pride of lions or a pack of wild dogs would prove fascinating,” he says.