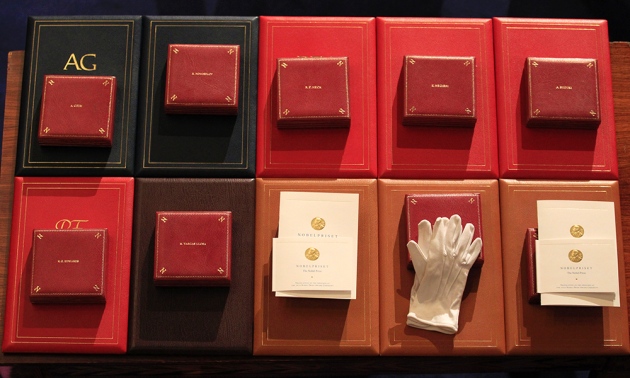 The 2016 Nobel prizes will be announced in early October.

If the predictions are to be believed, this could be a rip-roaring Nobel Prize season.

Each year, Nobel soothsayers offer preseason prophecies about who will win the awards, which are announced in early October. This year’s crop of predictions is wading into controversial territory. Several have homed in on CRISPR–Cas9 gene editing — a relatively quick and easy method for altering genomes — as a possible winner. In physics, predictions are coalescing around a team at the Laser Interferometer Gravitational-Wave Observatory (LIGO) that, earlier this year, ended a century-long quest to detect the gravitational waves predicted by Albert Einstein.

But bestowing prizes for these discoveries would require the Nobel committees to make difficult — and unusually speedy — judgements about who deserves credit. The LIGO collaboration, for example, is more than 1,000 researchers strong. And battles over who invented CRISPR–Cas9 gene editing are raging at the US Patent and Trademark Office (USPTO) and elsewhere around the world  — raising questions about whether a Nobel could affect deliberations over patents, or whether the Nobel Committee will wait for the patent dispute to conclude.

Regardless of which team the committee chooses, it is safe to say that initial positive press for the winners will be followed by a dose of ice water, as slighted researchers and their colleagues cry foul, says Arturo Casadevall, a microbiologist at the Johns Hopkins Bloomberg School of Public Health in Baltimore, Maryland.

“On the first week of October, the world focuses on science and that’s good,” he says. “But after that, every single year, there’s a controversy.”

Forecasters have been issuing predictions since the first Nobel Prizes were handed out over a century ago, says Nils Hansson, a historian at the Heinrich Heine University of Düsseldorf, Germany, who has picked through archives of Nobel nominations and deliberations. (That information becomes public after 50 years.)

From the start, participants expressed concern about the rule that no more than three scholars could share a prize. Hansson says that In 1901, a German surgeon asked to nominate candidates for the first prize in physiology or medicine protested that science is done in teams, and so it is difficult to pick one person who has made the most important contribution.

The annual Nobel predictions by analytics firm Thomson Reuters highlight the challenge. Last year, Thomson Reuters’s data crunchers predicted that the Nobel Prize for Chemistry would go to Jennifer Doudna of the University of California in Berkeley and Emmanuelle Charpentier, now at the Max Planck Institute for Infection Biology in Berlin, for inventing the CRISPR–Cas9 technique.

This year, however, the firm predicted a different CRISPR–Cas9 pairing: Feng Zhang of the Broad Institute of MIT and Harvard in Cambridge, Massachusetts, and George Church of Harvard Medical School across the river in Boston. This time, Thomson Reuters predicted that the award would be for the development of CRISPR–Cas9 gene editing specifically in mouse and human cells.

In so doing, Thomson Reuters has crystallized arguments in an ongoing battle between the Broad and Berkeley over who owns patent rights to the technology. If one of these teams nabs a Nobel Prize, the winners’ legal team would probably submit the award as evidence in the patent fight before the USPTO — but the patent judges are likely to disregard it, says Jacob Sherkow, an intellectual-property scholar at New York Law School in New York City. “Future developments — like who the scientific community later thinks is the ‘true’ inventor — aren’t that important.”

Likewise, the Nobel Committee is unlikely to concern itself with the patent brawl — at least if history is any guide. Hansson says that the committee has consistently tuned out external factors, even in the 1930s when Adolf Hitler forbade German scholars from accepting the award. Instead, the committee busies itself with establishing priority for the discovery, wrestling with the problem of pinpointing one, two or three scholars in a large community.

Doing so can take decades. In first half of the 20th century, many researchers were nominated 20 or more times before receiving an award, Hansson says. Pathologist Peyton Rous, for example, won the 1966 Nobel Prize in Physiology or Medicine for discovering tumour-causing viruses in chickens — half a century after he made the discovery. “And even with all of that deliberation, each year will bring the usual disputes over the scholars who were left out,” Hansson says.

Last year’s chemistry award to DNA-repair researchers, for example, generated a stir for omitting several key scientists in the field, including Philip Hanawalt of Stanford University in California.

But perhaps the most visible Nobel omission was in 2003, when the Nobel Prize in Physiology or Medicine was awarded for the development of magnetic resonance imaging. Physician Raymond Damadian — who, Sherkow notes, held a valuable patent on the technique — did not make the cut. He responded by taking out full-page advertisements in newspapers, including The New York Times and The Washington Post, proclaiming this slight as “the shameful wrong that must be righted”.

Casadevall has argued that the Nobel Committee could avoid such negativity by awarding fields rather than individuals. The LIGO prediction illustrates his point, he says. “Would it be the people who built the interferometers? Should it be the theoreticians?” he asks. “This is a human accomplishment that involves enormous numbers of people. Picking three at the most is always going to be unfair and unrepresentative.”

For now, Nobel-aspiring scientists would do well to head off potential disputes ahead of time, Nobel prizewinner Richard Roberts of New England Biolabs in Ipswich, Massachusetts, advised last year in a tongue-in-cheek guide to winning the award1.

“Collaborate with other scientists,” he wrote, “but never with more than two other people.”