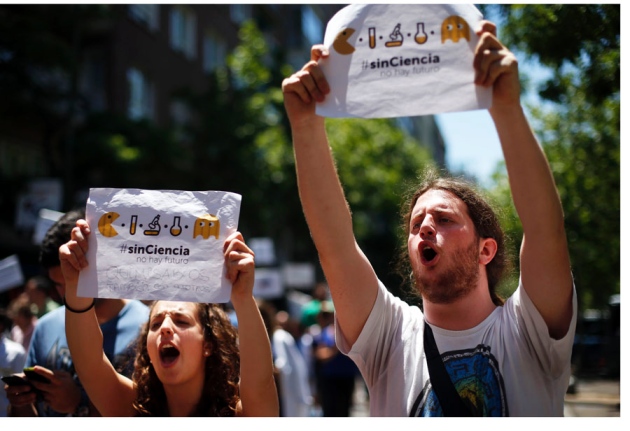 Researchers in Madrid protest Spanish austerity measures with banners reading 'There is no future without science'.

Scientists gathered in public meetings in 19 Spanish cities this morning under the slogan ‘Let’s save research’. The gatherings were called by the Letter for Science movement, a coalition that includes the main scientific organizations of the country.

According to the movement, 5,000 scientists in Madrid marched from the central building of the National Council for Scientific Research (CSIC) to the economy ministry — which is responsible for science — to deliver an open letter proposing 'ten commandments', aimed at stopping “the ruin of the Spanish science system”.

The movement has been brewing for more than a year. Spanish scientists issued an open letter in March 2012 and took to the streets in December 2012 in protest against heavy cuts in science spending and hiring. “What has happened since has only worsened the painful scenario we denounced,” says the latest open letter, published on 21 May. That letter also called for today’s protest, to stop the “dismantlement of a system that took decades to be created”.

After more than doubling its investment in science between the late 1990s and 2009, the state has cut the science budget by 39% since 2009. In 2011 the government of the right-wing People’s Party eliminated the science ministry and continued with the cuts, and it has said that it does not plan any funding increases for 2014. Spain has only partially paid its membership dues to research organizations such as the European Science Foundation and the European Space Agency.

Researchers estimate that one-third of all projects funded in 2013 by the National Plan for Research, Development and Innovation — the country's main science funding scheme — have not yet had any money disbursed.

Another one-third of the projects may not be able to have their grants renewed in 2014, because the call for proposals for this year’s funding scheme has not been issued yet. Members of Letter for Science estimate that even if the call for proposals were issued now, it would be difficult to bring it to fruition before the end of the year. “Delays may make 2013 a lost year for science funding,” says Alicia Durán, a CSIC investigator and a member of the council of the Workers' Commissions, a union known under its Spanish acronym CCOO.

On 4 June, economy minister Luis de Guindos said that he will add €104 million (US$138 million) to the 2013 science budget, of which €79 million will go to the National Plan, and the rest to CSIC.

The €298 million budgeted for the National Plan before this increase was enough only to cover the expenses of projects awarded in previous years, and almost nothing was left for awarding new ones, a spokesperson at the economy ministry has confirmed. Now, new projects should count on the additional €79 million, but Durán observes that this is less than what was awarded on average to new projects in the previous years — about €150 million, according to CCOO data.

“We are depleting our chances to develop a knowledge-based economy,” says Amaya Moro-Martín, a postdoctoral researcher in physics at CSIC in Madrid who helped to start Letter for Science. The group calls for an increase in science spending; for a reversal of the ‘brain drain’ by removal of freezes on public hiring; for an end to the delays in the funding process; and for the creation of an independent science agency. “This country does not have a future if we cannot develop the human capital to do science,” says Durán.