This SpaceX video shows the failed 28 June launch. Problems with the rocket become apparent around timecode 23:45.

A SpaceX Falcon 9 rocket carrying more than 1,800 kilograms of supplies to the International Space Station (ISS) broke up shortly after lift-off on 28 June at Cape Canaveral, Florida.

This is the third supply mission to the space station that has failed since late October, when an Antares rocket made by Orbital Sciences (now Orbital ATK) in Dulles, Virginia, exploded during launch at NASA's facility in Wallops Island, Virginia. In April, a Russian Progress spacecraft tumbled out of control shortly after lifting off from the Baikonur Cosmodrome in Kazakhstan.

“This is a tough day,” said Bill Gerstenmaier, NASA's associate administrator for human exploration and operations, at a post-launch press conference. “This is not where I really wanted to be on a Sunday afternoon, but spaceflight is not easy.”

SpaceX, of Hawthorne, California, has successfully launched two other supply missions to the station this year, and today's launch was to have been its seventh to the ISS under its contract with NASA. The company is working with NASA to understand why the mission failed. (View NASA's archived video of the launch.)

Gwynne Shotwell, SpaceX president and chief operating officer, said that the launch progressed normally for 139 seconds before problems appeared in the engine that constitutes the rocket's second stage. Shotwell says that the rocket's payload, the cargo-laden Dragon capsule, transmitted telemetry data for some period after the launch failure, which could offer clues to what went wrong.

SpaceX founder Elon Musk offered additional details in a series of posts on Twitter. “There was an overpressure event in the upper stage liquid oxygen tank. Data suggests counterintuitive cause," he wrote.

The three astronauts aboard the space station are safe and have enough food and water to last through October, said Michael Suffredini, who manages NASA's space station programme.

Cargo lost today included replacement parts for the space station's water-processing equipment, a spacesuit for use in space walks, and the first of two docking adaptors designed to allow commercial space vehicles — such as Dragon — to attach to the station.

Other losses include “a lot of important research equipment”, Gerstenmaier said. The resupply mission was carrying components for more than 30 student science projects and 35 experiments. They included a polymerase chain reaction machine for studying gene expression in orbit, and a small greenhouse experiment to grow cabbage for astronauts to eat. Another project would have used the near-zero-gravity conditions of space to test how particles diffuse through tiny channels, to try to improve devices that can be implanted under the skin and slowly release medicine into the body.

Several experiments were flying for a second time after having been destroyed in the Antares explosion. A rebuilt camera from the Chiba Institute of Technology in Narashino, Japan, would have analysed the chemistry of meteors burning up in the atmosphere.

"We lost our camera again yesterday and we still do not believe that happened to us," says Tomoko Arai, the project's lead scientist. Even so, the team has a back-up to the back-up ready to go, and Arai says they hope to launch the remaining camera to the ISS on another rocket in the near future.

And a high-profile study to compare astronaut Scott Kelly, currently in space, with his twin brother Mark on Earth continues. The first samples of blood, saliva and other bodily fluids were flown to Earth this month, but the timetable for getting future samples down is now in question.

The next supply mission to the space station is scheduled for 3 July, when a Russian Progress spacecraft will launch from Kazakhstan. The rocket's third stage, which was the cause of the April launch failure, has been replaced with an older design configuration. In August, the Japan Aerospace Exploration Agency also plans to send up one of its cargo ships. But each accident makes the supply chain more tenuous.

SpaceX has a contract with NASA to begin flying astronauts to and from the ISS starting in 2017. Gerstenmaier said it was too early to determine whether today's accident would affect that timeline. 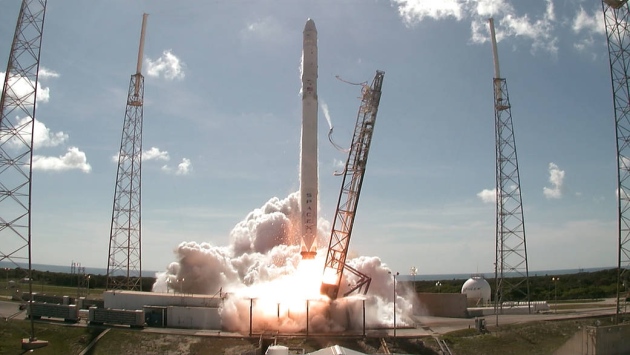 This SpaceX rocket exploded shortly after launch on 28 June.

4:15 p.m. BST: The story has been updated to add remarks from Tomoko Arai.

10:00 p.m. BST: The story has been updated to add more information about the science equipment lost and plans for future supply missions.

7:30 p.m. BST: The story has been updated with remarks from a NASA press conference.

6 p.m. BST: The story has been updated to include launch video provided by SpaceX and a statement released by NASA administrator Charles Bolden.