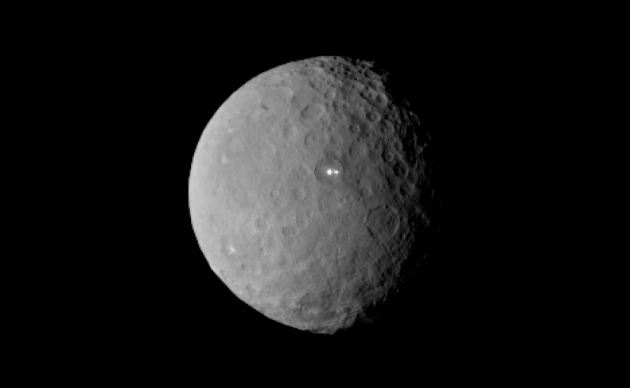 On 6 March, the asteroid Ceres will pull NASA’s Dawn spacecraft into its gravitational embrace. At nearly 1,000 kilometres across, Ceres is one of the largest unexplored worlds in the Solar System, and a protoplanet that promises to reveal watery secrets dating back billions of years.

The spacecraft has already glimpsed two bright spots in a 92-kilometre-wide crater in Ceres’s northern hemisphere. They may be sunlight reflecting off frozen water, which planetary scientists expected to find on the asteroid. But explaining why there is more than one spot is turning out to be Ceres’ first big mystery.

“Ceres has really surprised us,” says Carol Raymond, a planetary scientist at the Jet Propulsion Laboratory (JPL) in Pasadena, California, and the mission’s deputy principal investigator.

Powered by a stream of ionized xenon, Dawn has been heading for Ceres since 2007. Its first stop was Vesta, another large asteroid, in 2011–2012. Vesta turned out to be an intriguing world, pockmarked by towering mountains and coated with watery minerals.

On arriving at Ceres, Dawn will become the first spacecraft to have orbited two extraterrestrial bodies. Among its main goals is to explore water within the huge asteroid. Hubble Space Telescope observations show that Ceres is bulging in a way that suggests it has an icy shell surrounding a rocky core1. In 2014, scientists with the European Space Agency’s Herschel space telescope reported finding water vapour spewing off Ceres2. That water probably dates back to the birth of the Solar System, more than 4.5 billion years ago.

Ceres’s primordial ocean may have leached salts from the surrounding rock, says Julie Castillo-Rogez, another planetary scientist at JPL. As the asteroid cooled, water would have begun freezing, concentrating the salt in the liquid that remained. That would mean Ceres once had — or could even still have — a buried salty ocean, the sort of place where astrobiologists like to speculate about the possibility of extraterrestrial life.

Dawn will use an infrared instrument to map the minerals on Ceres’s surface. Finding salt would support the idea of a buried ocean. “It’s going to be very exciting,” says Castillo-Rogez, who is working on the mission.

The two bright spots could be a big clue to ice on Ceres. A single spot could have been formed by a meteorite impact kicking up dirt from the surface, exposing brighter ice beneath. But with two spots, one off to the side of the crater, that idea becomes harder to support. “The team is really excited about this feature, which is unique in the Solar System,” says Raymond. “We will be revealing its true nature as we get closer.”

Ceres is also intriguing for its size and colour. It is by far the largest asteroid in the main asteroid belt, which lies between Mars and Jupiter, and makes up about one-third of the belt's total mass. Ceres' sheer size qualifies it as a dwarf planet, the first to be visited by a spacecraft. (NASA’s New Horizons probe will fly past Pluto, another dwarf planet, in July.)

Ceres is also unusually dark for an asteroid, which makes the two bright spots all the more striking — visually and scientifically. The surprising colour is probably a signal that Ceres contains a lot of iron-rich minerals such as magnetite, says Andrew Rivkin, a planetary scientist at the Johns Hopkins University Applied Physics Laboratory in Laurel, Maryland.

Dawn’s studies should help to clarify Ceres’s origins. One idea holds that Ceres formed far from the Sun, out in the distant Kuiper belt, where Pluto reigns, and was kicked into the inner Solar System by the gravitational influence of other protoplanets. Other researchers think that Ceres has been at about the same distance from the Sun since it formed, similar to many main-belt asteroids.

“I think Ceres and Vesta are probably more like cousins than just neighbours,” says Rivkin. “I don’t think they formed in vastly different parts of the Solar System, but that’s something else that Dawn should be able to say.”

Over the next few weeks Dawn will spiral closer to Ceres, and begin mapping the asteroid's surface in earnest in late April. The researchers plan to name any features it uncovers from agricultural mythology, in line with the asteroid's namesake, the Roman goddess of agriculture.

The US$473-million spacecraft will travel as low as 375 kilometres above Ceres's surface. Its primary mission lasts through June 2016. After that, it is destined to float in orbit indefinitely, as an artificial moon of Ceres.

The article has been updated with the news that Dawn reached Ceres.