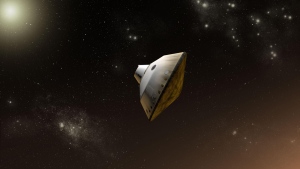 On its way to the red planet, the Mars Science Laboratory mission found that cosmic rays would pose the most substantial radiation risk to any humans who were to embark on the same voyage.

Astronauts travelling to Mars on any of the current space-flight vehicles would receive a dose of radiation higher than NASA standards permit, according to a study of the radiation environment inside the craft that carried the Curiosity rover to the planet.

The study, reported in Science1, is the first to use radiation data recorded by a robotic craft en route to Mars. It is also the first to rely on measurements from a radiation detector in space that has shielding similar to what might be used on missions carrying humans, says physicist Sheila Thibeault of NASA’s Langley Research Center in Virginia, who was not involved in the study.

Previous calculations of exposure were extrapolations, notes study co-author Cary Zeitlin of the Southwest Research Institute in Boulder, Colorado. Those studies used detectors in space that either had no shielding or were aboard Mars-bound craft whose instruments were not switched on until they reached the planet.

The measurements made by the Mars Science Laboratory (MSL) mission, which landed Curiosity in August 2012, are at the high end of those extrapolations and therefore are not a big surprise, Zeitlin says. But scientists could not be certain that the extrapolations were accurate until they examined the data detected by the spacecraft, he adds. “Models are all well and good, but there’s no substitute for data.”

Zeitlin and his colleagues analysed the radiation recorded by a small detector on board the craft that was active during most of the 253-day cruise to Mars. Although the craft was not uniformly protected from exposure to Galactic cosmic rays and charged particles from the Sun, the MSL’s shielding on average approximated that of human space-flight missions.

The results suggest that astronauts on a Mars-bound mission that was using a current propulsion system would receive 0.66 sieverts of radiation during the voyage to and from the planet. But the study does not take into account additional radiation to which the humans would be exposed once they arrived on the Martian surface, for what might be an extended stay. Exposure to a radiation dose of 1 sievert is associated with a 5% increase in the risk of developing a fatal cancer.

“If, as the authors suggest, the MSL data correspond to the dose to be expected by astronauts on a similarly shielded vehicle under similar conditions, then that dose is still unacceptable by NASA standards,” says John Charles, chief of the International Science Office in the Human Research Program at NASA’s Johnson Space Center in Houston, Texas.

Radiation models suggest that merely adding more layers of conventional shielding, such as aluminium and polyethylene, would reduce the risk of exposure to energetic particles from the Sun, but not to Galactic cosmic rays, says Craig Kundrot, NASA chief scientist of the  Human Health and Performance Directorate at the Johnson Space Center.

At NASA Langley, Thibeault and her colleagues are testing new types of shielding that consist of hydrogenated materials. Hydrogen offers protection because it breaks apart heavy charged particles without creating secondary particles that add to the radiation dose, she notes. One of the materials under investigation, hydrogen-filled boron nitride nanotubes, looks particularly promising because it is robust and lightweight enough to double as both the skin of a spacecraft and its shield. Using separate materials to build and shield a craft would add too much weight to a Mars-bound mission, Thibeault notes.

Thibeault says that she is heartened by the new study because she had feared that the radiation dose might be considerably higher. The results suggest “that this is a problem we can solve”, she adds.

Radiation biologist Sally Amundson of the Columbia University Medical Center in New York finds it encouraging that the MSL data agree with previous estimates. But she adds that there are still many biological unknowns in long-term space flight, including possible damage to the cardiovascular and central nervous systems, and physiological changes that might alter the human response to radiation.