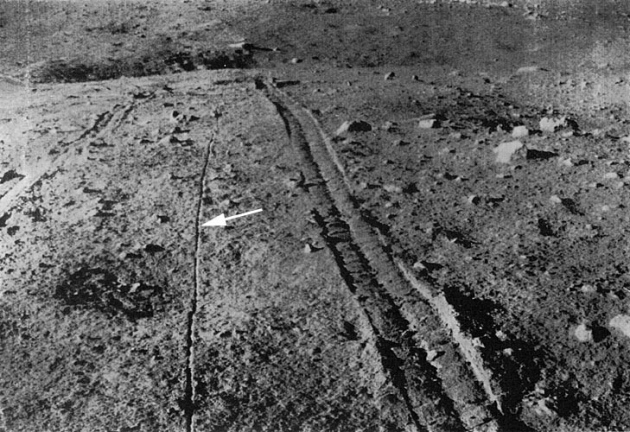 The track left on the Moon by Lunokhod 2 in 1973. On the left (arrow) is the mark made by the rover’s ninth wheel, which measured how far the vehicle had travelled.

Alexander Basilevsky always wanted to stop driving. As a planetary geologist working with the Soviet Union’s remotely controlled lunar rovers — Luno­khod 1 and Lunokhod 2 — in the early 1970s, Basilevsky was constantly asking mission chiefs to halt the rolling explorers for scientific studies, fascinated by the buffet of rocks and soil captured by the vehicles’ cameras. But the bosses in the Soviet space programme were having none of it. “It is Lunokhod, not ‘Lunostop’!” they told Basilevsky as they kept the rovers driving, intent on covering as much ground as possible.

Now it seems that the second rover, Luno­khod 2, went even farther than many back then had thought. New calculations, using images from orbit that trace the rover’s 40-year-old tracks far below, show that Lunokhod 2 travelled some 42 kilo­metres in its lifetime — 5 kilo­metres more than the distance recorded in the official mission logs. And that means that NASA’s Opportunity rover, inching up to the 37-kilometre mark after nearly a decade on Mars, has a long way to go to break the record for the distance driven by a wheeled vehicle on another world (see ‘Space race’). 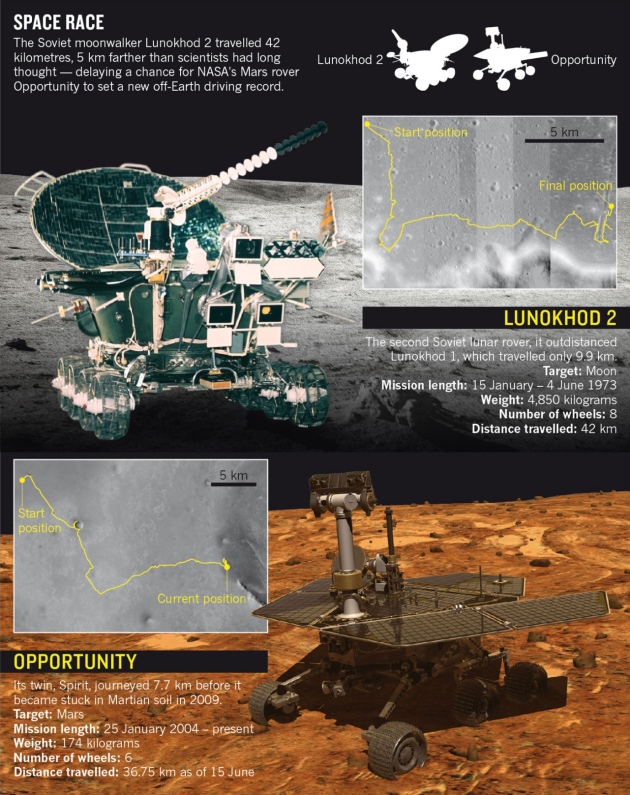 In a mid-May news release about Opportunity’s longevity, NASA cited the 37-kilo­metre distance for Lunokhod 2, and some team members speculated to the press that Opportunity would soon set a new record for driving distance off-Earth. Since then, they have pulled back from any predictions of besting the Russians, even though Opportunity’s odometer was at a tantalizing 36.75 kilometres as of 15 June.

“We’re not going to talk about breaking any records” just yet, says Opportunity’s principal investigator, planetary scientist Steven Squyres of Cornell University in Ithaca, New York. “I’m awestruck by what the Lunokhod team managed to accomplish so many years ago, and I wouldn’t want to claim that we’ve passed their record unless we’re really sure.”

Russian scientists, for their part, are quite certain about their revised 42-kilometre estimate, and have reported the findings at various planetary-science conferences over the past year.

The 1.7-metre-long Lunokhod 2 rover explored the Moon’s Le Monnier Crater for about 4 months, sending back 86 panoramic pictures and more than 80,000 television images. It stopped working in the spring of 1973, possibly after a close shave involving a crater wall dumped lunar soil into its interior.

The revised calculations of its journey were made by planetary mapper Irina Karachevtseva and her colleagues at the Moscow State University of Geodesy and Cartography (MIIGAiK). The team used images of the Lunokhod 2 landing site collected by the Lunar Reconnaissance Orbiter (LRO), which has been studying the Moon since 2009. They adjusted tiny line-of-sight distortions in those images using a three-dimensional representation of the Moon’s topography. Tracking the rover’s traverse on these adjusted images yielded the current best estimate of between 42.1 and 42.2 kilometres — very close to the distance of a marathon, the team notes.

Karachevtseva says that she is not surprised that the official mission logs are some 5 kilometres off the latest estimate. Luno­khod 2’s odometer was a narrow ninth wheel that dragged behind it as it travelled, notching up distance by how much the wheel spun round. It was always thought to have had an error of 10–15%, she says — in fact, one member of the Lunokhod team who helped to drive the rover told MIIGAiK scientists that the team always thought the distances were underestimated.

The MIIGAiK team also reanalysed the path of the first rover, Lunokhod 1, which explored the Moon in 1970–71. Here, surprisingly, Karachevtseva says the team found that Lunokhod 1 had stopped short of the distance shown in the official mission logs: it covered 9.93 kilometres rather than the recorded 10.54 kilometres. A paper on the Lunokhod 1 findings is in the press at Planet­ary and Space Science, and the MIIGAiK team is finalizing a publication on Lunokhod 2.

It is unclear why the Lunokhod 1 distance was originally overestimated and that of Lunokhod 2 underestimated, says Phil Stooke, a planetary cartographer at the University of Western Ontario in London, Canada. He speculates that Lunokhod 1 might have failed to account for wheel slip, a common problem on powdery lunar soils, whereas Lunokhod 2 might have overcompensated or had some other sort of sensor error.

Wheel slip continues to bedevil rovers on other worlds. Opportunity’s twin on Mars, the Spirit rover, slipped more than expected as it climbed Husband Hill, in the Gusev Crater region of Mars. However, as it went downhill, the wheels gained traction such that the total slip was close to zero when its journey was completed (R. Li et al. J. Geophys. Res. 113, E12S35; 2008).

Engineers working on Opportunity calibrate the distance it has covered by reconciling its wheel odometry daily with orbital images, says Ron Li, a Mars-rover mapper at Ohio State University in Columbus. Opportunity is currently leaving an area called Cape York, which it explored for 20 months, and heading towards Solander Point about 1.3 kilometres away, where it will try to keep working through the upcoming Martian winter. Lunokhod 2 may thus hold the extraterrestrial driving record for quite a bit longer.

For Basilevsky, now at the Russian Academy of Sciences in Moscow, the reanalysis is a fitting end to the Lunokhod story. As a scientist, he was not supposed to be in the military’s mission control centre for Lunokhod 2. But he sneaked in to be present as the rover drivers navigated the alien terrain — and he likes to joke that he drove the machine remotely as well.

“This news,” he teases, “says that I was a more effective driver than I used to think.”

This story wrongly stated that the Russian scientists used laser mapping from the Lunar Reconnaissance Orbiter to make a three-dimensional representation of the Moon’s topography. In fact, they used processed images from the orbiter’s narrow-angle camera. The text has now been corrected.