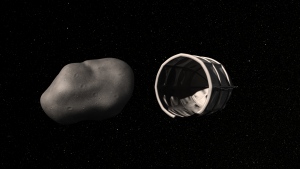 Within a few years, a company called Planetary Resources, based in Bellevue, Washington, hopes to start looking for asteroids to mine for valuable materials such as platinum, iridium and osmium. Eventually, it intends to bring materials back into Earth orbit, including raw materials that could be used in constructing spacecraft, and water, which, once separated into hydrogen and oxygen, could be used as rocket propellant in other interplanetary missions.

It is also about making money. It plans to sell the resources stowed in space, which would also help firms to lighten their payloads, thereby saving them billions of dollars in launch costs, says John Lewis, a retired planetary scientist from the University of Arizona in Tucson and author of the 1997 book Mining the Sky. And the platinum-group metals the company intends to mine can fetch as much as US$1,500 per troy ounce, or about $50 per gram, so are valuable enough to bring all the way home. "The average meteorite that falls to Earth has a higher concentration of platinum-group metals than the richest known ore bodies," Lewis says. The company calculates that a single 500-metre-diameter asteroid is likely to contain more of these metals than have been mined throughout history.

Many asteroids are fairly easy to access because they orbit close to Earth, says Brian Wilcox, a robotics engineer at NASA's Jet Propulsion Laboratory in Pasadena, California. Many also have weak gravity fields, so spacecraft can alight on and disembark from them without expending much fuel. "You only need to achieve escape velocity from Earth," Wilcox says, "then you can float very slowly to the object."

In fact, materials have already been returned from an asteroid — although only a tiny amount. In 2005, the Japanese Hayabusa mission collected dust from the near-Earth asteroid called 25143 Itokawa (see 'Asteroid visit finds familiar dust'). But owing to mechanical problems with its sampling mechanism, Hayabusa returned only a fraction of a gram in 2010. A NASA mission called Origins-Spectral Interpretation-Resource Identification-Security-Regolith Explorer, or OSIRIS-REx, scheduled to be launched in 2016, plans to return up to 60 grams of material from the RQ36 asteroid by 2023.

It is unclear whether Planetary Resources will beat OSIRIS-REx to the punch. First, says Anderson, Planetary Resources intends to launch a series of telescopes to scan the skies for the up to 1 million near-Earth asteroids bigger than 50 metres across that scientists believe remain to be discovered. Then "swarms" of maybe half a dozen probes will be launched towards appealing targets from that list. The swarms would be able to investigate an asteroid from multiple angles, and provide back-ups in the event that a single probe fails.

The probes' instruments, Lewis says, will help to find out what each asteroid is made of. Scientists could then look for matching rocks in meteorite collections on Earth and send them into space to investigate how valuable materials can be extracted in microgravity even before samples are returned from the asteroids.

Scientists are, of course, keen to see samples in their labs. Of particular interest, says Humberto Campins, a planetary scientist at the University of Central Florida in Orlando and a member of the OSIRIS-REx team, would be samples from asteroids known as carbonaceous chondrites. Wilcox agrees. Carbonaceous chondrites, he notes, are rich in water, ammonia and other volatile products that don't normally survive passage through Earth's atmosphere in meteorites. They are "the native material out of which the planets formed", he says.

Although Planetary Resources was set up with economic rather than scientific goals, Lewis says that the company may also get into the sample-return business. "That's certainly another market," he says.