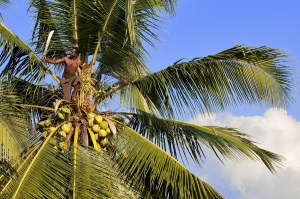 The international collection of the South Pacific's coconut palm species, held at a field gene bank in Papua New Guinea (PNG), is under threat from a disease outbreak close to the gene bank.

The warning came at a meeting on the Pacific coconut research and development (R&D) strategy in Samoa last week (31 October–1 November), convened by the Australian Centre for International Agricultural Research and the Secretariat of the Pacific Community.

The deadly disease, Bogia Coconut Syndrome, is threatening the survival of a gene bank of region's most important tree, the coconut, a number of which are endemic. Named after the town of Bogia on the north coast of mainland PNG, the disease appears to be caused by bacteria similar to, but distinct from, the bacteria that cause the better known Lethal Yellowing disease that attacks palm species.

Ironically, PNG was selected as the site for the gene bank in the 1990s because the country was relatively free of coconut pests and diseases.

In an attempt to contain the disease, movement of coconuts and coconut palms, both from the gene bank and for commercial reasons, out of the affected region has been banned, with roadblocks in place to help enforce this.

But these restrictions are preventing the gene bank from fulfilling one of its key roles: distributing useful varieties in support of R&D efforts.

The gene bank holds 3,200 coconut palms, representing 57 different varieties of Cocos nucifera, and is one of five international coconut collections around the world.

Roland Bourdeix, coordinator of the International Coconut Genetic Resources Network, is arranging an urgent mission to PNG to assess the situation.

"We hope to rescue the collection," Bourdeix says. "We'll relocate it if there's a safe way to move the plants. We are also planning to duplicate [the gene bank] in another country."The crisis is at least providing an opportunity to rethink the strategy for regional coconut conservation," he says. "For example, we are exploring a concept called 'polymotu' — using small islands as gene banks by planting them with one or two varieties. The isolation keeps the varieties pure."

Duplication will not be easy: some of the varieties are not kept in any other gene banks and will need to be collected again from the field.

Richard Markham, research programme manager for the Australian Centre for International Agricultural Research, said: "At present, both the pathogen and its epidemiology are poorly understood".

"We are supporting research to try to identify the [Bogia Coconut Syndrome] vector and better understand the host range of this disease. Once we have that information, everyone will be better placed to assess the threat — both to coconuts and livelihoods in general."