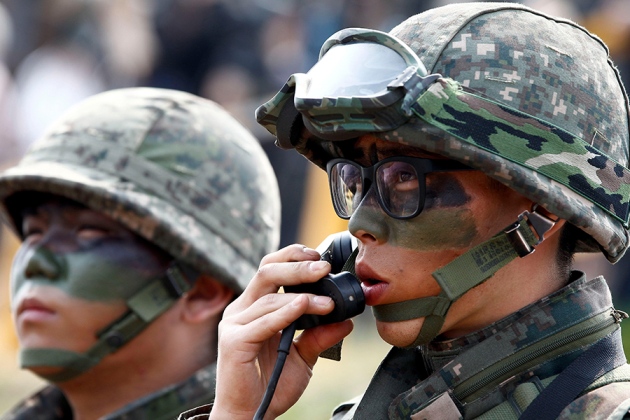 Most South Koreans must serve in the military, but some doctoral students are granted exemptions.

A proposal from the South Korean defence ministry to scrap exemptions from military service for science and engineering students is being met with fierce resistance by researchers and students alike. They say that it will disrupt PhD studies and could trigger an academic 'brain drain' if researchers choose not to do graduate studies in South Korea as a result.

Leading members of South Korea’s major political parties as well as the science ministry have voiced their opposition to the idea, which was announced on 17 May. “It will immediately lead to a weakening of competitiveness in science and technology,” Hyunwook Park, provost of the technical university KAIST in Daejeon, told the Chosun Ilbo newspaper. At a 3 June press conference and rally held outside the defence ministry’s Seoul headquarters, students presented a petition containing more than 14,000 signatures against the plan.

The defence ministry says that it is still negotiating details with other ministries. “It’s an open plan,” spokesperson Hwang Yun-jeong told Nature.

South Korea technically remains in a state of war with North Korea, and all able-bodied men aged 18 to 35 are required to serve two years in the military. But each year, the military gives roughly 2,500 exemptions to science and engineering graduate students with master's degrees, known as technical research personnel (TRP). About 1,000 of them can fulfil the service with three years of study in a PhD programme, while others do research at government institutes or in industry.

In its 17 May announcement, South Korea’s defence ministry projected a shortfall of up to 30,000 troops by 2023. “It’s inevitable because of the low birth rate,” a ministry official told Korean media. To close the gap, it plans to eliminate all exemptions by 2023. A total of 28,000 are issued annually; the rest include exemptions for the police, firefighters and public-health workers.

Under the plan, the military would stop issuing sought-after doctoral exemptions after 2018. Current undergraduates would have no prospect of getting an exemption.

“All of our Korean science and technology universities are very shocked about it,” says Kim Sang Soo, a fourth-year biology student who is president of the undergraduate student council at Pohang University of Science and Technology (POSTECH). “I really want to go to POSTECH for graduate school, so it’s a huge shock to me, too.”

Many undergraduates, reasoning that the exemptions now look unlikely, are already considering getting their military service out of the way and joining this summer, says Hong Jinwoo, a third-year student in chemical and biological engineering at Seoul National University.

A student protest movement has been coordinated through a Facebook page called TRP Helper. Kim argues that the military’s plan is self-defeating, because it would deplete the talent pool for the considerable amount of defence research that the military funds at universities. A student-led analysis at POSTECH showed that more than one-fifth of its PhD candidates are currently classed as TRP, and eliminating their positions would wipe out 23% of the university’s defence-related projects.

Some students think that they now have the momentum. “I’m optimistic that the military plan will fail,” says Yong Seok Hong, a first-year graduate student at Seoul National University.