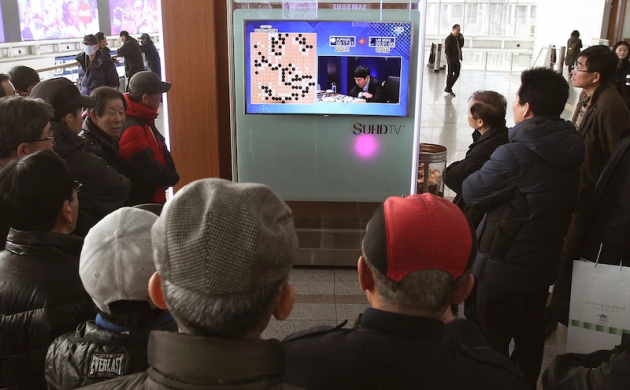 Scrambling to respond to the success of Google DeepMind’s world-beating Go program AlphaGo, South Korea announced on 17 March that it would invest $863 million (1 trillion won) in artificial-intelligence (AI) research over the next five years. The commitment includes an already-budgeted 138.8 billion won for 2016; if the rest is spread evenly over the following four years, it represents a 55% increase in annual funding for AI. The windfall includes money for the founding of a high-profile, public–private research centre with participation from several Korean conglomerates, including Samsung, LG Electronics and Hyundai Motor, as well as the technology firm Naver, based near Seoul.

“Thanks to the ‘AlphaGo shock’, we have learned the importance of AI before it is too late”

The timing of the announcement indicates the impact in South Korea of AlphaGo, which two days earlier wrapped up a 4–1 victory over grandmaster Lee Sedol in an exhibition match in Seoul. The feat was hailed as a milestone for AI research. But it also shocked the Korean public, stoking widespread concern over the capabilities of AI, as well as a spate of newspaper headlines worrying that South Korea was falling behind in a crucial growth industry.

South Korean President Park Geun-hye has also announced the formation of a council that will provide recommendations to overhaul the nation’s research and development process to enhance productivity. In her 17 March speech, she emphasized that “artificial intelligence can be a blessing for human society” and called it “the fourth industrial revolution”. She added, “Above all, Korean society is ironically lucky, that thanks to the ‘AlphaGo shock’, we have learned the importance of AI before it is too late.”

Korean scientists told Nature that the AI research institute was already in the planning stages, and was originally intended to open in 2017. The science ministry, however, says it was on track to open by this June. However, AlphaGo’s success has prompted the government to accelerate plans for the institute. Science ministry official Kim Yong-soo said that they hope it will open as soon as possible, but that the exact date depends on the companies involved. The institute is likely to be located in Pangyo, a technology city just south of Seoul.

Korean AI researchers who spoke to Nature expressed concern that the new initiative is short-sighted, and a knee-jerk reaction. “It will help, but more consistent support is required,” said Kwon Hyuk-chul, an AI researcher at Pusan National University in Busan.

“I’m very sorry to hear that the government is interested in investing a lot of money in mostly industry, not universities,” said one machine-learning professor at a leading Korean university, who requested anonymity in order to talk openly about the policy. “Industry will probably get some useful applications for making some product, but they are basically not interested in the research itself.”

South Korea already funds two high-profile AI projects: Exobrain, which is intended to compete with IBM’s Watson computer, and Deep View, a computer vision project. The combined 80 billion won had already been allocated to these projects over the next five years is included in the 1 trillion won figure, science ministry official Lee Jae-beom told Nature.

The international Go community has probably not seen the last Go showdown between a human and a machine. Two days before the AlphaGo match began, deep-learning start-up firm NovuMind challenged the Chinese professional Go player Ke Jie to a computer match. Based in California's Silicon Valley, NovuMind was founded in 2015 by Ren Wu, a former deep-learning researcher at Baidu, the Chinese web-services giant.

The terms of the match have yet to be formalized, says Wu, but he is confident that they will be signed soon. The 18-year-old Ke Jie defeated Lee Sedol in an international tournament held in China in January, and is currently the world’s top-ranked player at GoRatings.org — just ahead of AlphaGo.

The developers of two other Go-playing programs, called Zen and CrazyStone, are also working on enhanced deep-learning versions.